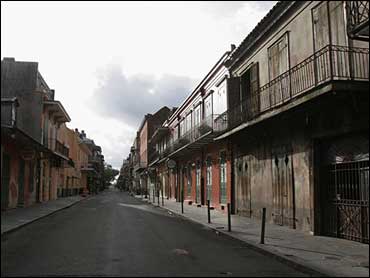 Every day, Philip and Sharon Watson discover something else they have lost.

First, it was their house. Then they lost an aunt in one of the nursing home tragedies. And now, Sharon, who has been a teacher in New Orleans for 27 years, has lost her job.

Watson is one of thousands in New Orleans that have lost jobs. CBS News correspondent Byron Pitts reports that in some communities, more people are out of work than have jobs. Economists estimate that

close to 60,000 businesses — from restaurants to law firms to doctors offices — will disappear (video).

On Tuesday, Mayor Ray Nagin announced the city is laying off as many as 3,000 employees — or about half its workforce — because of the financial damage inflicted on New Orleans by Katrina.

Karen Lorio is a nurse that worked throughout those first few horrifying nights after the hurricane hit. Now, she has received a pink slip.

"The hospitals are not operating," Lorio told Pitts. "I've put out job applications. I might have to leave the state of Louisiana to get work.

Pitts reports that what makes the job losses even more frustrating for residents of New Orleans is that there are actually plenty of new jobs in the city, but they seem to be going to everyone but local residents. Warehouses across the city have been converted into temporary housing for out-of-state construction crews — teams hired by mega-corporate contractors like Halliburton which have swarmed New Orleans.

Residents returned Wednesday, many for the first time since Hurricane Katrina, to mold-covered homes and unanswered questions about how they'll rebuild their lives in a city broken financially and psychically.

Although people have been trickling back into New Orleans for a few weeks, Wednesday was the first day the city allowed people in all areas except one -- the hard-hit Ninth Ward. The most common answer heard to questions about what will happen to them and their city was, "No one knows."

The commission plans to form a caravan to leave Chicago on Sunday. It will head to cities like St. Louis, Memphis, Tenn., and Jackson, Miss. to pick up evacuees and workers who want jobs cleaning up and rebuilding on the Gulf Coast.

Jackson said those who join the caravan will be placed in temporary housing in New Orleans.

Mayor Nagin said only non-essential workers will be laid off and that no firefighters or police will be among those let go in New Orleans.

Nagin described the layoffs as "pretty permanent" and said that the city will work with the Federal Emergency Management Agency to notify municipal employees who fled the city in the aftermath of Katrina, which struck about a month ago.

The mayor said the move will save about $5 million to $8 million of the city's monthly payroll of $20 million. The layoffs will take place over the next two weeks.

meeting with New Orleans evacuees Tuesday
, didn't comment on the layoffs. But he said he agrees that displaced workers should get priority for reconstruction jobs. He said the combined problem of bringing back the city's labor force, and providing them housing, is solvable, and he believes workers would return if they were provided temporary housing and jobs connected to rebuilding the city.

Mr. Clinton said federal funds for rebuilding will go through a state plan that he believes should include the housing-training jobs combination.