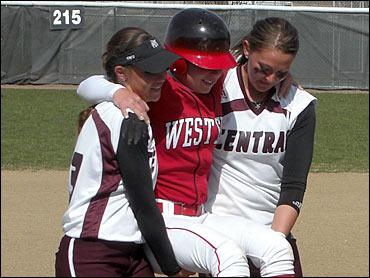 With two runners on base and a strike against her, Sara Tucholsky of Western Oregon University uncorked her best swing and did something she had never done, in high school or college. She hit her first home run, which cleared the center field fence.

But it looked like the shortest of dreams-come-true when she missed first base, started back to tag it, and collapsed with a knee injury.

She crawled back to first but could do no more. The first base coach said she would be called out if her teammates tried to help her. Or, the umpire said, a pinch-runner could be called in, and the homer would count as just a single.

Then, members of the Central Washington University softball team stunned their home crowd in Ellensburg by carrying Tucholsky around the bases Saturday so the three-run homer would count - an act that contributed to their own elimination from the playoffs.

Central Washington first baseman Mallory Holtman, the all-time home run leader in the Great Northwest Athletic Conference, asked the umpire if she and her teammates could help Tucholsky.

The umpire said there was no rule against it.

So Holtman and shortstop Liz Wallace put their arms under Tucholsky's legs, and she put her arms over their shoulders. The three headed around the base paths, stopping to let Tucholsky touch each base with her good leg.

"It was the right thing to do," Holtman told Early Show co-anchor Julie Chen Thursday. "She'd hit it over the fence. She deserved the home run."

"It's kind of a big blur at the moment," Tucholsky said to Chen. "I didn't really realize what was going on -- I've had people tell me -- until I actually had time to reflect on it."

"The only thing I remember is that Mallory asked me which leg was the one that hurt," Tucholsky said. "I told her it was my right leg and she said, `OK, we're going to drop you down gently and you need to touch it with your left leg,' and I said `OK, thank you very much.' "

"We started laughing when we touched second base," Holtman said. "I said, 'I wonder what this must look like to other people.' "

"We didn't know that she was a senior or that this was her first home run," Wallace said Wednesday. "That makes the story more touching than it was. We just wanted to help her."

Holtman is a business major from White Salmon, Wash., who hopes to study sports management in graduate school. She said she and Wallace weren't thinking about the playoff spot and didn't consider the gesture something others wouldn't do.

As for Tucholsky, the 5-foot-2 right fielder was focused on her pain. "I really didn't say too much. I was trying to breathe," she told The Associated Press in a telephone interview Wednesday.

"I didn't realize what was going on until I had time to sit down and let the pain relax a little bit," she said. "Then I realized the extent of what I actually did."

"I hope I would do the same for her in the same situation," Tucholsky said.

As the trio reached home plate, Tucholsky said, the entire Western Oregon team was in tears.

"She was going to kill me if we sub and take (the home run) away. But at same time I was concerned for her. I didn't know what to do," Knox recalled.

"It's a great story," Knox observed to Chen, "something I'll never forget -- the game's about character and integrity and sportsmanship, and it's not always about winning and losing."

Tucholsky's injury is a possible torn anterior cruciate ligament that will sideline her for the season, and she plans to graduate in the spring with a degree in business.

Her home run sent Western Oregon to a 4-2 victory, ending Central Washington's chances of winning the conference and advancing to the playoffs.

"In the end, it is not about winning and losing so much," Holtman said. "It was about this girl. She hit it over the fence and was in pain, and she deserved a home run."