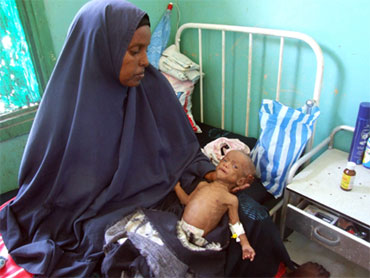 The United Nations says it's running out of food for millions of starving Somalis in part because the United States is delaying aid amid fears it could be intercepted by militants linked to al Qaeda.

Starting last month, the U.N. World Food Program has cut rations by up to half for some people in the lawless, impoverished east African nation and will run out of supplies in December, the Rome-based agency said Saturday.

"WFP's food assistance supply line to Somalia is effectively broken," said Peter Smerdon, a spokesman for the agency in Nairobi, Kenya. "The pipeline break is partly because (the U.S. government) has delayed U.S. assistance to Somalia."

The U.S. State Department confirmed it had concerns that militants could get their hands on humanitarian assistance and had temporarily suspended food shipments.

"Renewal of some U.S. non-food humanitarian programs was delayed while we reviewed conditions on the ground and their impact on our programs," said Laura Tischler, a State Department spokeswoman.

"U.S. food aid deliveries to Somalia were temporarily suspended while we conducted our review," she said. "However, the food aid pipeline for Somalia has not been broken."

The shortfall in aid lamented by the United Nations was first reported Friday by The New York Times.

Other factors contributing to the problem include a drop in donations caused by the world economic crisis and an increased need for aid across the Horn of Africa, Smerdon said.

The United States is WFP's largest donor, providing usually about half of the food aid that the agency delivers to 2.2 million people in Somalia. The country has been crippled by 18 years of civil war, an Islamic insurgency, high food prices and a severe drought.

So far this year, the State Department says the United States has provided $179 million to help Somalis, including $124 million in food aid.

Smerdon said WFP and other humanitarian agencies were discussing with U.S. officials and other donor countries measures that would prevent aid from being diverted to al-Shabab. The Islamic militant group is linked to al Qaeda and controls much of southern Somalia.

"WFP understands the concern of the United States and other donors regarding the appropriate utilization of resources in Somalia," Smerdon said. "We remain hopeful that the United States will continue to fund food relief programs in Somalia, understanding the difficult and complex political and operational environment in which agencies such as WFP must work."

Smerdon declined to discuss which measures were being considered, citing the sensitivity of the talks.

He said the agency was willing to provide "sufficient assurances" while stressing the "need to preserve WFP's neutrality as a humanitarian actor."

Tischler said the American government wanted to ensure that the delivery of aid in Somalia complies "with U.S. laws designed to prevent potential support to terrorists, including to al-Shabab, and to ensure that it effectively helps the Somalis who need it."
By Associated Press Writer Ariel David