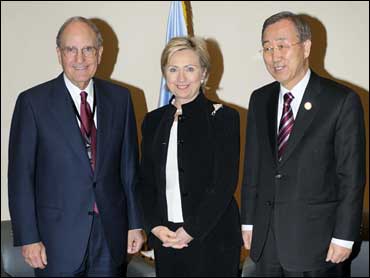 At his first meeting with U.S. Secretary of State Hillary Rodham Clinton, the U.N. chief pressed for more money and stronger American leadership on climate change, the Middle East, chaos in Somalia and justice in Darfur.

U.N. Secretary-General Ban Ki-moon said he was encouraged by Clinton's response to his request for additional cash for peacekeepers and other badly-stretched U.N. priorities.

They spoke on the sidelines of an international conference in Egypt on Monday that raised $5.2 billion in pledges for rebuilding Gaza, at the conclusion of the U.N. secretary-general's nine-day, six-nation African tour.

"She is quite supportive, and she told me that she will, her administration, the Obama administration is committed to working very closely politically and also (with) these financial contributions," Ban told The Associated Press in a wide-ranging interview this week.

The U.N. had a difficult relationship with the United States under former U.S. Ambassador John Bolton, who served for 16 months in 2005-2006. He aggressively pursued former President George W. Bush's agenda, including pressing for sanctions against Iran and North Korea and an overhaul of the United Nations, antagonizing many U.N. member states with his abrasive approach.

Ban, who became secretary-general in January 2007, has promoted a good working relationship with the world body's single biggest backer. The United States provides 22 percent of the organization's $4.86 billion operating budget, but is perennially late in paying its dues.

"I told her that we highly value a stronger partnership between the U.S. and the U.N.," he said. "Policy-wise, we will fully cooperate, but at the same time we expect (more) U.S. support for the United Nations politically and financially."

Ban told Clinton, a co-member of the so-called Quartet of Mideast peacemakers that also includes Russia and the European Union, that "we are looking forward to full engagement and leadership" from the U.S. toward a two-nation peaceful solution to the Israeli-Palestinian conflict.

The former New York senator visited Ban's native South Korea twice as first lady; he served as the nation's foreign minister. Now, they are determined to work toward his current No. 1 priority - brokering a new international climate treaty by the end of the year.
By Associated Press Writer John Heilprin