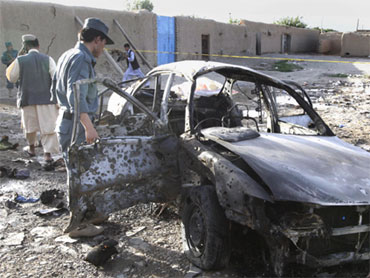 A U.N. report released Saturday painted a grim picture of the security situation in Afghanistan, saying roadside bombings and assassinations have soared the first four months of the year amid ramped-up military operations in the Taliban-dominated south.

The United Nations' findings appeared at odds with Pentagon assertions this week claiming slow-but-steady progress in Afghanistan - an assessment challenged by U.S. lawmakers during hearings on Capitol Hill.

The report, which Secretary-General Ban Ki-moon submitted to the U.N. Security Council this week, said Afghanistan's overall security situation "has not improved" since his last report in March.

Given the discrepancy between the U.N.'s and Pentagon's characterizations, CBS News foreign affairs analyst Pamela Falk said the Obama administration "will have to address the problem and evaluate the state of the war."

"Most disturbing in the report is the involvement of al Qaeda in attacks against U.S. and NATO forces, as well as the number of children, caught in the crossfire," Falk reported.

Roadside bombings in the first four months of 2010 skyrocketed 94 percent over the same period of 2009, and assassinations of Afghan officials jumped 45 percent, mostly in the ethnic Pashtun south, which has become the focus of the war, the report said.

Suicide attacks occurred at a rate of about three per week, half in the restive south. The increase in complex attacks - using a combination of suicide bombers and small-arms fire - pointed to Taliban groups linked with al-Qaida, the report said.

The study found some encouraging signs, however, including the government's plan to reach out to insurgents and offer economic incentives to leave the battlefield. It also said the U.N. was working with Afghan officials to prepare for parliamentary elections in September.

Nevertheless, the U.N. found the number of security incidents had "increased significantly compared to previous years," in large part because of more military operations in the south early this year.

"Tough fighting is expected to continue, but the situation is trending in our favor as more forces flow into the area," Blotz said.

He said joint NATO and Afghan forces were stepping up the pace of identifying and killing those responsible for attacks. Insurgent commanders were being apprehended by coalition forces, which over time will disrupt the ability to organize suicide and roadside bomb attacks, he said.

"It has to be tougher perhaps before it goes easier," said Blotz.

Blotz said the number of civilians killed or wounded in operations involving the international force dropped by 44.4 percent in the past 12 weeks, compared with the same period in 2009.

"In the same period of time, the number of civilian casualties caused by the insurgency increased by 36 percent," Blotz said.

Three Afghan soldiers were killed and two others wounded by a roadside bomb Friday in Paktia province in southeastern Afghanistan, according to the deputy provincial police chief Ghulam Dastagir.

Casualties among the U.S. and NATO force also are on the rise this month as thousands of reinforcements stream into Afghanistan - part of President Barack Obama's plan to try to stem the rise of the Taliban.

June is shaping up to be one of the deadliest months for U.S. troops in the nearly nine-year-old Afghan war, as insurgents step up attacks in response to a NATO push into Taliban strongholds in the south.

The deadliest month for U.S. troops in Afghanistan was October 2009, when 59 Americans died. The deadliest of the war for the entire international force was July 2009 when 75 troops, including 44 Americans, were killed.

Despite the violence, Defense Secretary Robert Gates insisted Wednesday the U.S.-led force was making progress and complained about negative perceptions taking root in Washington about the war.

Khan was related to Gul Alai, a major construction contractor in Kandahar who also once served as chief of intelligence in the southern city.