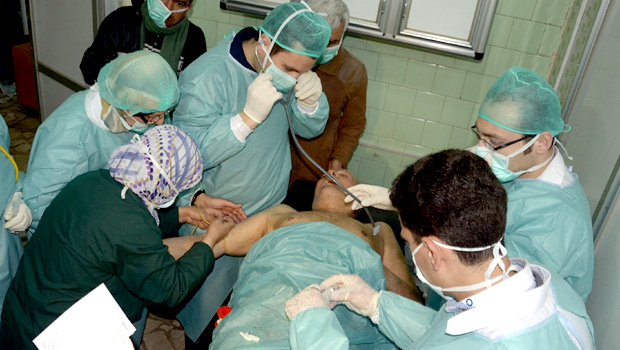 The team was set to embark Monday on the two-week trip to investigate alleged chemical strikes at three locations in the war-torn country.

The sources said the team, headed by Swedish professor Ake Sellstrom, was facing some "technical hitches and would rather postpone the visit to Damascus for a while."

Sellstrom, a former U.N. weapons inspector in Iraq, was supposed to lead a team of about 10 experts from the Organization for the Prohibition of Chemical Weapons (OPCW) and the World Health Organization.

"They will notify the Syrians when they are ready to head to the country," one source said on condition his name would not be used.

The U.N. gave a green light for the investigation last week following an "understanding" reached between the Syrian government, U.N. disarmament chief Angela Kane and Sellstrom himself.

The U.N. inspection team has been ready to go into Syria since April to try and verify claims that a chemical agent -- reportedly Sarin gas -- was used in the Khan Assal attack, but reaching the agreement with the Syrian government over logistics on the ground has delayed their arrival since then.

Syria is one of seven countries that has not joined the 1997 convention banning chemical weapons. The U.S. and its allies believe Syria has stockpiles of undeclared mustard gas, Sarin and VX nerve agents, and President Obama declared before the alleged attack in Khan Assal that any use of the deadly weapons would represent a "red line" for his administration and could draw direct U.S. involvement in the conflict.

The U.N. team is to carry out investigations in Khan Assal and two other locations, which were being kept secret for security reasons. Khan Assal recently fell back into rebel hands, and the U.S.-backed opposition coalition said last week it would welcome the inspectors to the village.

The team of inspectors, interpreters and medics faces a big challenge given the restrictions on travel within the country it agreed to in order to be granted access to Syria. Also hampering their progress will be the relatively small amounts of nerve agent likely used in the attacks, and the time that has passed since those attacks.

President Bashar Assad's government contends rebels were responsible for the purported March 19 Sarin gas attack in Khan Assal, which left 26 people dead. Assad initially invited the U.N. to inspect the site, but offered access only to that location.

The other, unconfirmed sites on the inspectors' list are likely Ataybah, a location near Damascus where a March attack has been alleged, and Homs, the focus of a possible December strike.

The United States, Europe and Russia largely agree that chemical weapons have been used in the conflict, but Russia has sided with Assad's government in blaming the opposition.

Western nations, on the other hand, say all the evidence points to Assad's forces using the weapons in "limited" quantities.

In a Sarin attack, about 85 percent of the chemical agent misses its target; it ends up in the soil, or blowing into other areas.

Sarin is volatile and breaks down quickly in contact with moisture. The process is speeded up by UV rays in sunlight, rain, humidity and wind. But traces of Sarin and other agents can still be found years after an attack.

Both the Syrian government and the opposition forces deny the use of chemical weapons. The United Nations last week said it had received 13 claims of chemical strikes, with corroborating material provided by Damascus, Moscow and three Western governments.

In June the Obama administration said it was to begin arming Syrian rebels, citing alleged evidence that the regime had used small quantities of sarin gas in strikes.

Syria has been embroiled in war for nearly two and a half years, leaving more than 100,000 people dead and millions more displaced internally and scattered to neighboring nations as refugees, according to the United Nations.