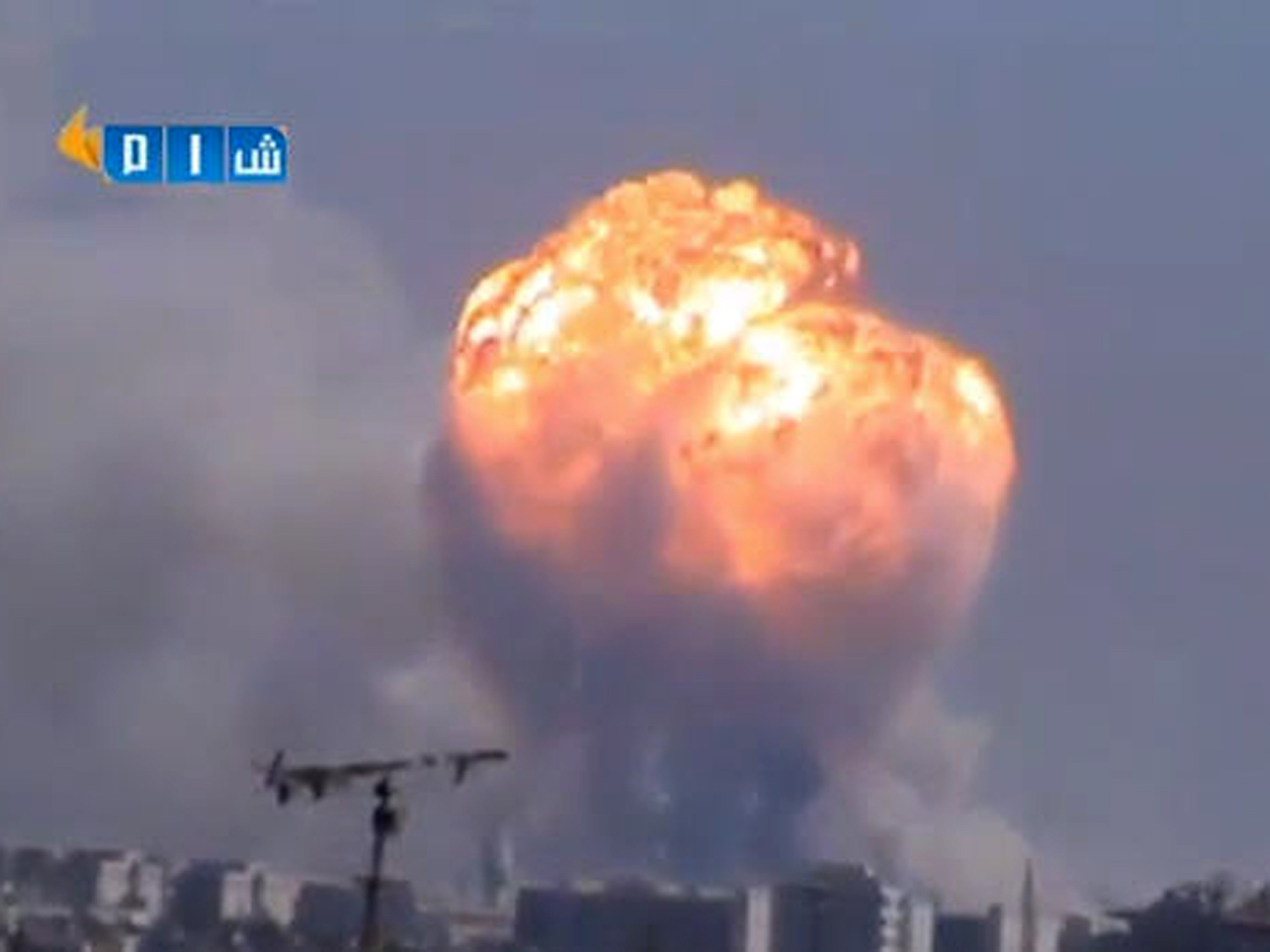 DAMASCUS, Syria Huge explosions rocked regime-held districts in the central Syrian city of Homs on Thursday, sending a massive ball of fire into the sky and causing successive blasts that activists said came from a struck weapons depot.

The Britain-based Syrian Observatory for Human Rights says the explosions killed at least 22 people and occurred after rebels targeted the area with rocket attacks.

A Homs resident said thick smoke and dust could be seen from a distance, as explosions shook the ground and panicked those nearby.

A video posted online by activists showed a huge ball of fire over Homs neighborhoods.

The explosions in Homs coincided with a rare trip by President Bashar Assad to a former rebel bastion near the capital, Damascus, to mark Army Day.

Assad's visit to Daraya is his first known public trip outside the capital, his seat of power, in more than a year. He visited the battered Baba Amr district in the central city of Homs after troops seized it from rebels in March 2012.

It also is the latest sign of confidence from Assad, whose troops have been on the offensive and scored significant gains against rebels in recent months. Assad pledged victory over troops fighting to topple him.

The explosions in Homs reflected the see-saw nature of the conflict. It showed that despite significant advances by Assad's military, rebels could still strike back.

An official at the governor's office in Homs said about 10 rockets slammed into the neighborhood of Zahra and the nearby sports stadium, sparking a large fire and causing several casualties.

The official spoke on condition of anonymity in line with government regulations.

The observatory said a rocket may have struck the arms depot, igniting the fire.

A resident of Homs corroborated that account, saying he was still hearing blasts more than an hour after the first explosion. He said they could be heard from the overwhelmingly pro-regime districts of Wadi Dahab and al-Walid.

Syrian state television did not provide details of Assad's visit to Daraya but the presidency's Facebook page released a photo of Assad in a blue suit and tie, chatting with two soldiers before what appears to be a damaged building.

Daraya, just south of Damascus, was held by rebels for months and it took the army weeks of heavy fighting to regain control of the suburb earlier this year.

Before his trip to Daraya, Assad lauded his troops' accomplishments in the battle against opposition forces.

"You have stunned the entire world with your steadfastness and ability to overcome the difficulties and score achievements in the face of the fiercest barbaric war the modern history has ever witnessed," he said in comments released for Army Day.

"Had we in Syria not been confident of victory, we wouldn't have been able to resist" for more than two years, Assad said. The statement was carried by the state news agency SANA.

In August 2012, activists reported that regime forces went on a days-long killing spree after they seized Daraya from rebels.

At the time, reports of the death toll ranged from more than 300 people to as many as 600. It was impossible at the time to independently verify the numbers because of severe restrictions on media coverage of the conflict.

Assad's comments Thursday followed several major gains against the rebels, mostly in the central province of Homs and near Damascus.

The rebels suffered two major setbacks during a wide-ranging government offensive in central Syria. In June, Assad's army recaptured the strategic town of Qusair near the Lebanese border. Earlier this week, government troops took control of a district in the city of Homs that had long been an opposition stronghold.

More than 100,000 people have been killed since the uprising against the Assad family's four-decade rule began in March 2011. The revolt later escalated into a civil war, which has uprooted millions of people from their homes.