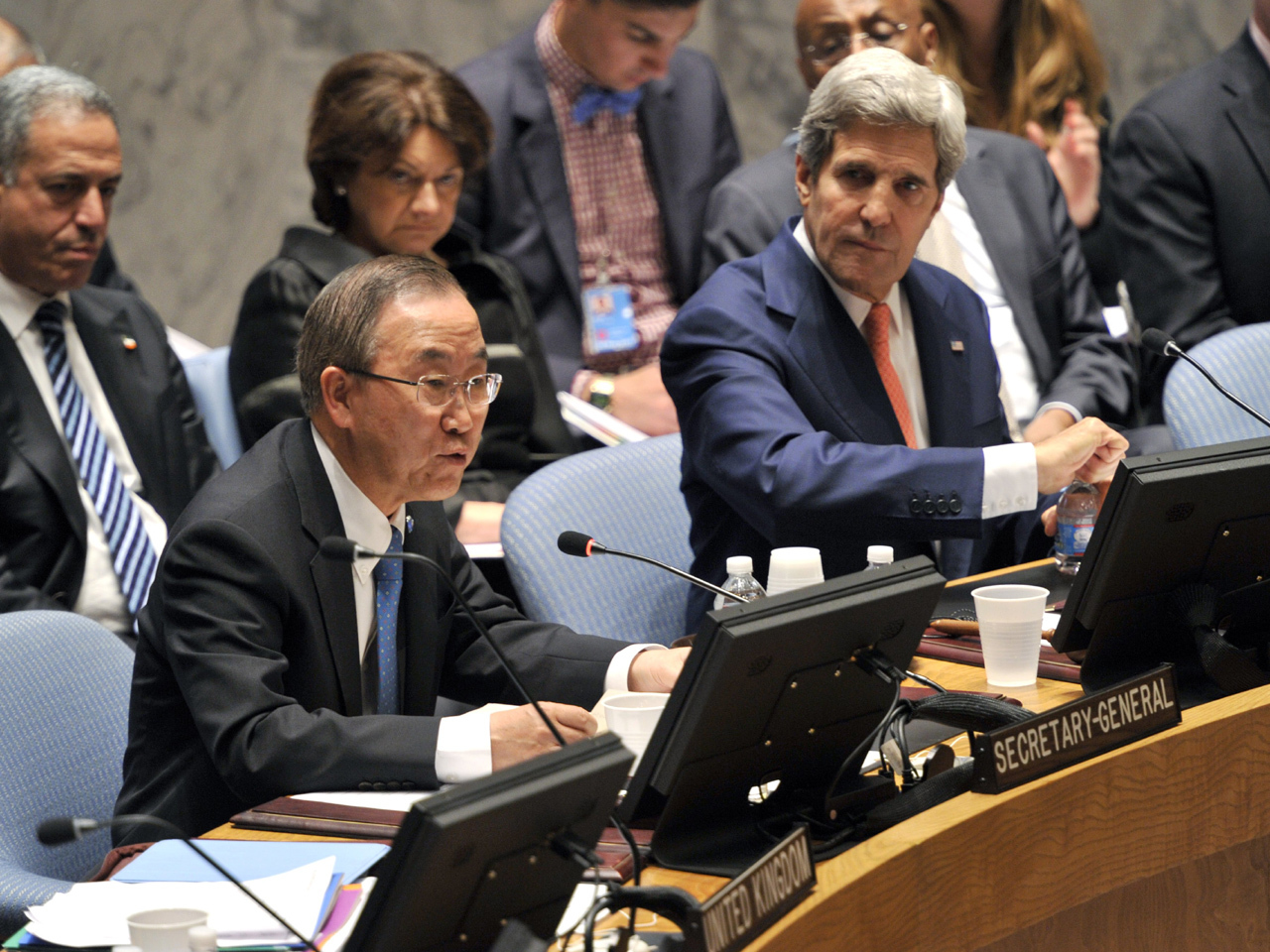 The number of dead in Syria's civil war has passed 100,000, the U.N. chief said Thursday, calling for urgent talks on ending 2.5 years of violence even as President Bashar Assad's government blasted the United States as an unsuitable peace broker.

In the latest example of the relentless carnage, a car bomb killed at least 10 people and wounded 66 in a pro-regime, residential area near the capital.

All international attempts to broker a political solution to the Syrian civil war have failed. Despite a stalemate that has settled in for months, both sides still believe they can win the war and have placed impossible conditions for negotiations.

The international community has been unable — and some say, unwilling — to intervene sufficiently to tip the balance in favor of either the Assad regime or the rebels.

"There is no military solution to Syria," U.S. Secretary of State John Kerry told reporters at the United Nations. "There is only a political solution, and that will require leadership in order to bring people to the table," he said.

He spoke ahead of talks with U.N. Secretary-General Ban Ki-moon, who said the death toll had risen from nearly 93,000 just over a month ago to more than 100,000. Syrian opposition groups had made that same estimate a month ago.

Ban called on the Syrian government and opposition to halt the violence, saying it is "imperative to have a peace conference in Geneva as soon as possible."

The U.S. and Russia are working to convene a conference, along with the United Nations, to try to agree on a transitional government based on a plan adopted in Geneva a year ago.

Speaking to CBS News foreign affair analyst Pamela Falk, Russia's U.N. Ambassador Vitaly Churkin said that the proposed peace talks between the Assad government and the Syrian opposition - known as Geneva II - are now in the hands of Secretary of State Kerry.

"We did our part in getting the Assad government to agree to attend the talks; now it is up to Kerry to produce the opposition," Churkin told Falk.

Churkin said that the Russian Foreign Minister has met with some of the opposition representatives a few months ago.

"The Syrian political opposition's visit to the U.N., and the meeting with the Secretary of State, will be key," Falk reports, "because a lot of support for them -- both political and military -- will depend on the perception of whether or not they are unified and whether or not they can speak for the coalition of moderate opposition groups."

No official date has been set because the opposition refuses to attend any talks that are not about Assad's departure. Syrian government officials say participation in the conference should be without preconditions, but add that Assad's departure before his term expires in 2014 is not negotiable. Assad has also said he has the right to run for elections again.

Kerry said he talked to Russian Foreign Minister Sergey Lavrov on Wednesday and that both countries remained committed to bringing the warring parties together to further peace efforts.

"We will try our hardest to make that happen as soon as is possible," Kerry said.

The comments at the U.N. appeared at odds with what was happening inside Syria. A U.S. decision to start sending arms to the rebels has further dimmed peace prospects.

The Syrian government criticized the U.S. actions, saying Washington is unsuitable to act as a broker at any peace negotiations.

"Washington's decision to send arms to terrorists in Syria confirms that the American administration is not objective in efforts to find a political solution and hold an international conference in Geneva," Syrian state TV said, citing an unidentified Foreign Ministry official. Assad's government routinely refers to opposition fighters as "terrorists."

"The American intentions seek to continue the cycle of violence and terrorism in Syria in order to destabilize ... the region," the statement said.

The U.S. government opposed providing any lethal assistance to Syria's rebels until last month but is moving ahead now with sending weapons to vetted rebels after securing the approval of the House and Senate Intelligence committees.

President Barack Obama and his national security team have yet to say publicly what weapons they'll provide and when they'll deliver them. There has also been concern in the West that U.S. weapons could end up in the hands of al Qaeda-linked groups.

The Syrian National Coalition, the main Western-backed opposition group, said in a statement that it was committed to ensuring the arms reach only those loyal to the coalition and its affiliated military councils.

The Syrian government has gone on the offensive and has succeeded, with the help of Lebanese Hezbollah militants, in pushing back rebels near Damascus and in central Homs province.

The White House acknowledged that momentum has shifted as Hezbollah and Iran have helped Assad's forces.

The rebels are lashing out with stepped up mortar attacks on Damascus, the seat of Assad's power, and with car bombs that target regime strongholds and security installations.

The Britain-based Syrian Observatory for Human Rights initially put the death toll at 10 but later raised it to 17, saying several of the wounded had died.

Also Thursday, the Syrian National Coalition cast doubt on a mission by U.N. experts to investigate the alleged use of chemical weapons in the civil war.

Both sides accuse each other of using the banned weapons. Swedish chemical weapons expert Ake Sellstrom and U.N. disarmament chief Angela Kane met with Syrian officials Tuesday in Damascus to try to hammer out terms for a possible probe.

The coalition said it was worried the experts would be swayed by Assad, whom they predicted would try to restrict their movements.

Ban said the U.N. team discussed with Syrian officials "the modalities of investigation."

"Since they're coming out of Syria now, we'll get the report soon," he said.

In Lebanon, a senior Hezbollah official warned European countries that there will be "repercussions" to their decision this week to place the group's military wing on the bloc's list of terrorist organizations.

Hezbollah's participation in the Syrian war alongside Assad's forces was among the reasons for the EU decision earlier this week.

Ammar al-Moussawi, head of Hezbollah's foreign relations department, spoke after meeting with Angelina Eichhorst, the EU ambassador to Lebanon. He suggested after the talks that she was not given a warm reception.

"No one can condemn me with one hand, then extend the other to shake hands," he told reporters in Beirut after the meeting.