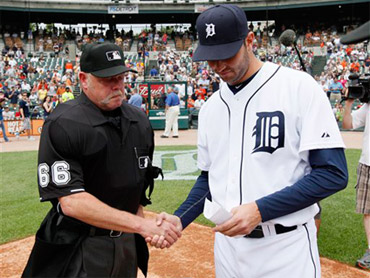 Jim Joyce may have cost Armando Galarraga a perfect game last year with a blown call, but major league baseball players still regard him as the best umpire in the game.

That's according to a Sports Illustrated poll of players, in which Joyce was the leader by a wide margin, garnering 35 percent of the vote. He was followed by Tim McClelland (18 percent), Jim Wolf (7 percent), Laz Diaz (6 percent) and Joe West (5 percent).

The poll was conducted in spring training and had 237 players respond to the survey.

While Joyce initially came under fire for missing an obvious call at first base with two outs in the ninth inning, he drew even more admiration for the way he handled the blunder, personally apologizing to Galarraga and taking full blame. Joyce seemed genuinely shaken by the miscue, even wiping away tears as he took the field the next day to greet Galarraga.

That response, and his otherwise solid reputation as a good umpire, surely raised his stock in the eyes of players. He was already deemed the top umpire in the game in a 2010 ESPN poll.

It's interesting that West cracked the top 5 because in a similar poll by SI, the umpire also won the "worst umpire in baseball" vote by a landslide, getting 41 percent of the votes. West has a well-earned reputation for being a quick-tempered bully on the diamond and self-promoting egomaniac off the field.

West drew criticism for ripping the Yankees and Red Sox for taking too long to play their games and he has routinely been vilified for ejecting players and managers in a heartbeat. Last year, in the ESPN survey, 35 percent of players said West had the "quickest hook" in the game (which was 22 percent more than the next ump on the list).

West has consistently violated the cardinal umpire rule: stay quiet and do your job. Thanks to his country music forays, his equipment gear push and his incendiary comments, "Cowboy Joe" is nothing short of a self-promoter, or as Deadspin put it last year, "attention whore."

Still, somehow West managed to rank as the fifth best umpire in the first poll.

"I would imagine some of it is from players who don't think West is as bad as his reputation," writes CBSSports.com's C. Trent Rosecrans. "However, that five percent was outvoted by the 41 percent who did find him to be that bad."