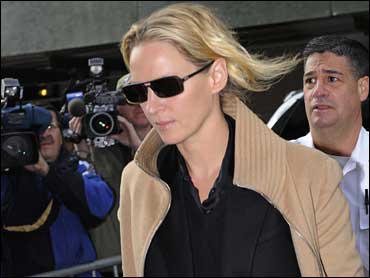 Jack Jordan, convicted in 2008 of stalking and harassing Thurman, is due in a New York City court today after being charged with trying to contact the 40-year-old actress again.

His lawyer and prosecutors said in February that they were discussing the potential for a plea deal but hadn't reached any agreement.

Jordan has pleaded not guilty to contempt, stalking and other charges.

In his 2008 trial, jurors were told he'd showed up at the actress' Manhattan home, called her family and sent weird letters. A tearful Thuurman herself testified about threats to her kids, crude come-ons and a photo of a decapitated bride,

Jordan was sentenced to three years' probation and told not to try to contact the actress for five years.

But prosecutors say he called some of her phone lines twice in October.

Thurman's spokesman has said she won't comment on the case.