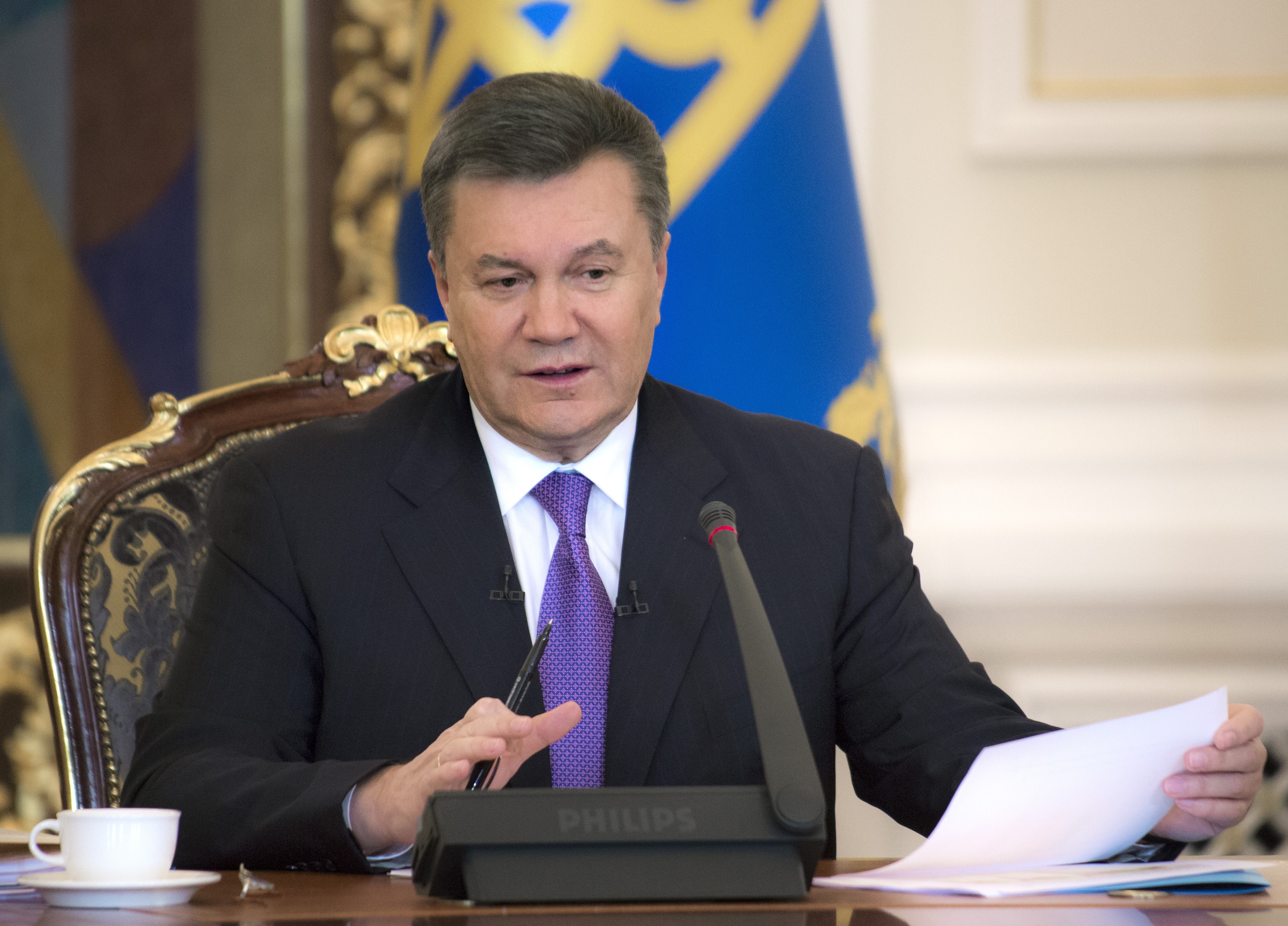 A statement on the presidential website Thursday said Yanukovych was on sick leave due to an acute respiratory illness and high fever. There was no indication of how long he might be on leave or whether he would be able to do any work.

Yanukovych is under pressure after two months of major protests seeking his resignation, early elections and other demands.

In one of a series of moves aimed at resolving the crisis, Ukraine's parliament on Wednesday passed a measure offering amnesty to those arrested during the protests, but only if demonstrators vacate most of the buildings they occupy.

The move was quickly greeted with contempt by the opposition, as were the previous efforts to calm the unrest.

The parliament voted earlier in the week to repeal harsh anti-protest laws, but Yanukovych must formally sign that repeal. He also accepted the resignation of his prime minister.

Protesters have said all the moves are insufficient.

The amnesty measure was put forth by a lawmaker from Yanukovych’s party as the president casts about for a way to end the protests. The measure was a softer version of an earlier proposal to only offer amnesty if all protests dispersed.

But the opposition regards the arrests during the protests -- 328 by one lawmaker's count -- as fundamentally illegitimate.

"In reality, parliament has just passed a law on hostages. The authorities have themselves recognized that they are taking hostages, as terrorists so they can trade the hostages," said Oleh Tyahnybok, leader of the Svoboda party and one of the protests' top figures, according to the Interfax news agency.

That disdain was echoed in Kiev's central Independence Square, where protesters have set up a large tent camp and conducted round-the-clock demonstrations since early December.

CBS News correspondent Holly Williams says the demonstrators have stayed out in the bitter cold because they believe their country's future hangs in the balance. The protests began peacefully in November after Yanukovych turned down a treaty with Europe in favor of £15 billion in financial aid from Russia.

After surviving decades of oppressive Soviet rule, Williams says many Ukrainians fear Moscow's influence and hope closer ties with Europe will bring greater freedom and democracy to the country, and those on the streets in Kiev are sticking to their demands for the president's resignation, early elections and the firing of authorities responsible for violent police dispersals of demonstrators.

Many here fear the standoff could end violently.

Arseniy Yatsenyuk is a member of parliament and one of the protest leaders. He told Williams that if the government sends riot police back into the central square in Kiev, it would “be a disaster for my country.”

"Is this a compromise, or are these political prisoners," said 30-year-old demonstrator Artem Sharai. "We will seize new buildings, if the authorities don't really change the situation in the country."

The protests started after Yanukovych backed out of a long-awaited agreement to deepen ties with the European Union, but quickly came to encompass a wide array of discontent over corruption, heavy-handed police and dubious courts.

Three demonstrators died in clashes with police last week, as anger boiled up over harsh anti-protest laws that Yanukovych pushed through this month. Parliament voted on Tuesday to repeal those laws, but Yanukovych has not signed the measure.

The bill would not apply to several city buildings in the center of Kiev which the protesters use as dormitories and operation centers, and are key support facilities for the extensive protest tent camp on the main square. With temperatures dropping as low as -4 Fahrenheit during the night, continuing the protests without places to shelter would be virtually impossible.

Given how the violent dispersal of demonstrators in December only swelled the Kiev protests and how the new laws spread discontent outside the capital, Yanukovych may have recognized that using force would set off severe new trouble and appears to be fishing around for measures to mollify the opposition without giving serious ground.

Meanwhile, there are growing concerns about dissension between radicals and moderates within the broad-based protest movement.

Earlier Wednesday, one group of protesters clashed with another in bid to free a government building that they had seized in Kiev. At least two protesters were injured.

Andriy Khoronets, an activist with the Svoboda party which represents more moderate protesters, tried to force members of the more militant Spilna Sprava group to vacate the Agriculture Ministry building as part of a compromise with the government.

"We must be seen as people who can fulfill one's obligations," Khoronets told The Associated Press outside the building. "There should be no anarchy."

The protests erupted after Yanukovych turned down a deal in November with the European Union in favor of getting a $15 billion bailout from Russia, but they have since shifted to demanding more human rights, less corruption and more democracy in this nation of 45 million.