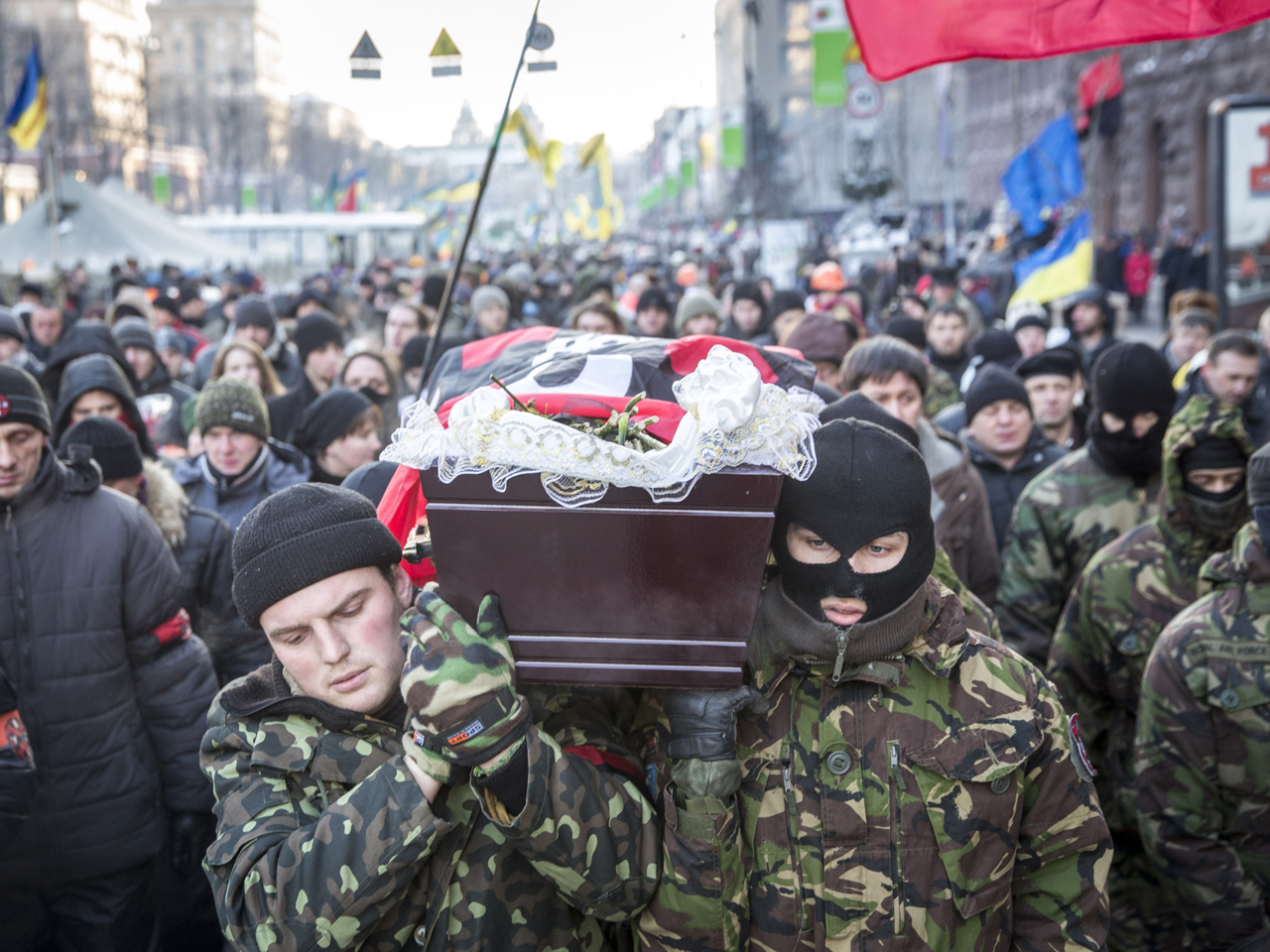 KIEV, Ukraine - Thousands of Ukrainians chanted "Hero!" and sang the national anthem on Sunday, as a coffin carrying a protester who was killed in last week's clashes with police was carried through the streets of the capital, underscoring the rising tensions in the country's two-month political crisis.

Mikhail Zhiznevsky, 25, was one of three protesters who died in clashes Wednesday.

"He could have been my fiancé, but he died defending my future so that I will live in a different Ukraine," said Nina Uvarov, a 25-year-old student from Kiev who wept as Zhiznevsky's body was carried out of St. Michael's Cathedral.

Zhiznevsky's body was carried several hundred yards to Independence Square in central Kiev, where protesters have established a large tent camp and held demonstrations around the clock since early December.

Crowds shouted "Yanukovych is a murderer!" and "Down with the criminal," a reference to President Viktor Yanukovych's run-ins with the law during his youth. The coffin was then carried to the site of Zhiznevsky's death at barricades near the Ukrainian parliament.

The opposition contends that Zhiznevsky and another activist were shot by police in an area where demonstrators had been throwing rocks and firebombs at riot police for several days. The government claims the two demonstrators were killed with hunting rifles, which they say police do not carry. The authorities would not say how the third protester died.

Meanwhile, protests against Yanukovych continued to engulf the country, and are now beginning to spread to central and eastern Ukraine, the leader's support base.

In Dnipropetrovsk, 240 miles southeast of Kiev on the Dnipro River, several hundred demonstrators tried to storm a local administration building, but police drove them back with water sprayed from a fire truck in subfreezing temperatures, the Interfax news agency reported. In Zaporozhets, about 45 miles down river, demonstrators gathered outside the city administration building.

The protests began in late November after Yanukovych shelved a long-awaited agreement to deepen ties with the European Union, but they have been increasingly gripped by people seeking more radical action, even as moderate opposition leaders have pleaded for the violence to end.

The latest protests came after opposition leaders issued a defiant response to Yanukovych's offer to make Arseniy Yatsenyuk, one of their top figures, the country's prime minister. While not rejecting the offer outright, Yatsenyuk said more of the opposition's demands must be met, including Yanukovych's resignation. He vowed protests will continue.

About half of Ukraine's people favored deeper integration with the EU, according to polls, and many Ukrainians widely resent Russia's long influence over the country.

In the past week, demonstrators have seized government administration buildings in a score of cities in western Ukraine, where Yanukovych's support is weak and desire for European ties is strong.

Zhiznevsky was from Belarus, a neighboring ex-Soviet country where hardline President Alexander Lukashenko has jailed and harassed his opponents. Vladimir Neklyaev, a Belarusian opposition leader, came to Kiev to bid farewell to Zhiznevsky.

"Ukraine is showing Belarus an example of how one should fight for freedom," Neklyaev said. "I am sure that our countries have a common future in Europe, where neither Ukrainians nor Belarusians will die."

Despite an offer to release activists and stop more prosecutions, the government continued a crackdown, with over 40 detained in the central city of Cherkasy after a protest, according to prosecutors.