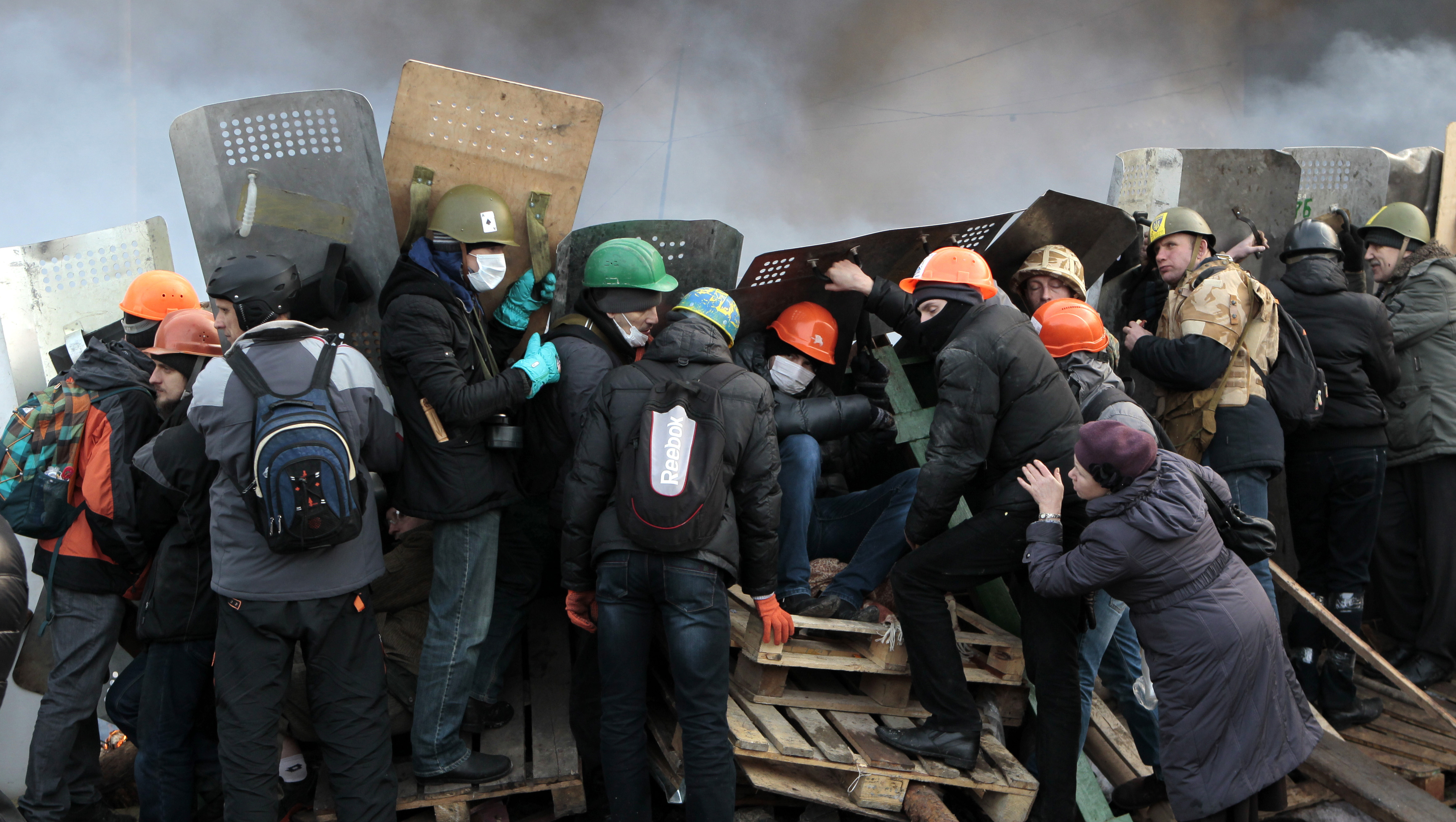 KIEV, Ukraine -- Ukraine's embattled president and leaders of the protests roiling the country agreed Wednesday on a truce, following a flareup of violence in the capital.

The Ukrainian Health Ministry on Thursday said 28 people have died and 287 have been hospitalized during this week's standoff between police and protesters in Kiev.

A statement on the ministry website on Thursday says 88 police, six journalists and four foreigners were among those hospitalized. Opposition activists, who have been treating wounded protesters in a downtown monastery, say the number injured is actually much higher.

A brief statement on the presidential website said President Viktor Yanukovych met with opposition leaders and they called for a truce and for negotiations on ending bloodshed to begin.

The statement did not give details of what a truce would entail or how it would be implemented.

The statement also did not specify how the negotiations would be conducted or give an indication of how they could be different from previous meetings of the president and the opposition leaders.

But one of the protest leaders, Vitali Klitschko, was quoted by the Interfax news agency as saying after the meeting that Yanukovych had ensured them there would be no attempt to storm the protesters' encampment on the main square of downtown Kiev.

There, flames from burning barricades of tires and refuse leaped into the air for a second night, as protesters demanding Yanukovych's resignation showed no sign of yielding.   President Barack Obama said Wednesday the United States "condemns in the strongest terms the violence that’s taking place."

"I want to be very clear as we work through these next several days in Ukraine that we're going to be watching closely, and we expect the Ukrainian government to show restraint, to not resort to violence in dealing with peaceful protestors," Obama said shortly after arriving in Toluca, Mexico, for an economic summit.

"We've also said we expect peaceful protesters to remain peaceful and we’ll be monitoring very closely the situation, recognizing that with our European partners and the international community there will be consequences if people step over the line,"  he said.


Later, Obama told reporters that he hoped the truce would hold, but said Ukraine must move forward to a unity government.

"My hope is at this point that a truce may hold but ... ultimately the government is responsible for making sure that we shift toward some sort of unity government, even if it's temporary, that allows us to move to free and fair elections so that the will of the Ukrainian people can be rightly expressed without the kinds of chaos we've seen on the streets," Obama said.

Earlier Wednesday, President Yanukovych replaced the army chief and the military said it would take part in a national anti-terrorist operation to restore order.

NATO Secretary-General Anders Fogh Rasmussen warned that it would be a mistake for Ukraine military to take action against the protesters.

"I strongly urge the Ukrainian government to refrain from further violence. If the military intervenes against the opposition, Ukraine's ties with NATO will be seriously damaged,"Rasmussen said in a statement.

Ukraine is not currently seeking membership in NATO, but it does cooperate with the Western alliance in number of areas.

The move comes after 26 people were killed and more than 400 injured in clashes Tuesday between riot police and anti-government protesters in Kiev. The violence was the worst in nearly three months of demonstrations in the capital.
The two sides are locked in a stalemate over the identity of the former Soviet republic, whose loyalties are divided between Russia and the West. The protests began in late November after Yanukovych turned away from a long-anticipated deal with the European Union in exchange for a $15 billion bailout from Russia.

The political maneuvering has continued since, with both Moscow and the West eager to gain influence over this former Soviet republic. Three EU foreign ministers - from Germany, France and Poland - were heading to Kiev on Thursday to speak with both sides before an emergency EU meeting back in Brussels to consider sanctions against those responsible for the violence.

Speaking to reporters in Mexico, Obama stressed that the crisis in Ukraine and the civil war in Syria are not a sign of trouble between Russia and the U.S.

"Our approach in the United States is not to see these as some Cold War chessboards in which we're in competition with Russia," he said. "Our goal is to make sure that the people of Ukraine are able to make decisions for themselves for the future."

Before the truce was announced, Ukraine's top security agency accused protesters Wednesday of seizing hundreds of firearms from its offices and announced a nationwide anti-terrorist operation to restore order.

Earlier in the day, demonstrators forced their way into the main post office on the Maidan after a nearby building they had previously occupied was burned down Tuesday in fierce, fiery clashes with riot police. Thousands of activists armed with fire bombs and rocks had defended the square, a key symbol of the protests.

"The revolution has turned into a war with the authorities," said Vasyl Oleksenko, 57, a retired geologist from central Ukraine. "We must fight this bloody, criminal leadership. We must fight for our country, our Ukraine!"

The bad blood now runs so high it has fueled fears the nation could be sliding toward a messy breakup. While most people in the country's western regions resent Yanukovych, he enjoys strong support in the mostly Russian-speaking eastern and southern regions, where many want strong ties with Russia.
Neither side now appears willing to compromise, with the opposition insisting on Yanukovych's resignation and early elections and the president prepared to fight till the end.

Both sides seem prepared for more violence. On Wednesday, protesters were digging up cobblestones in Independence Square to be used as missiles if needed. Some demonstrators were preparing Molotov cocktails in case riot police tried again to clear the protest camps.

Oleg Blaschtschuk, who works as a translator, told CBS News he came to Independence Square because he wants a more democratic government. He said he is prepared to fight if necessary.