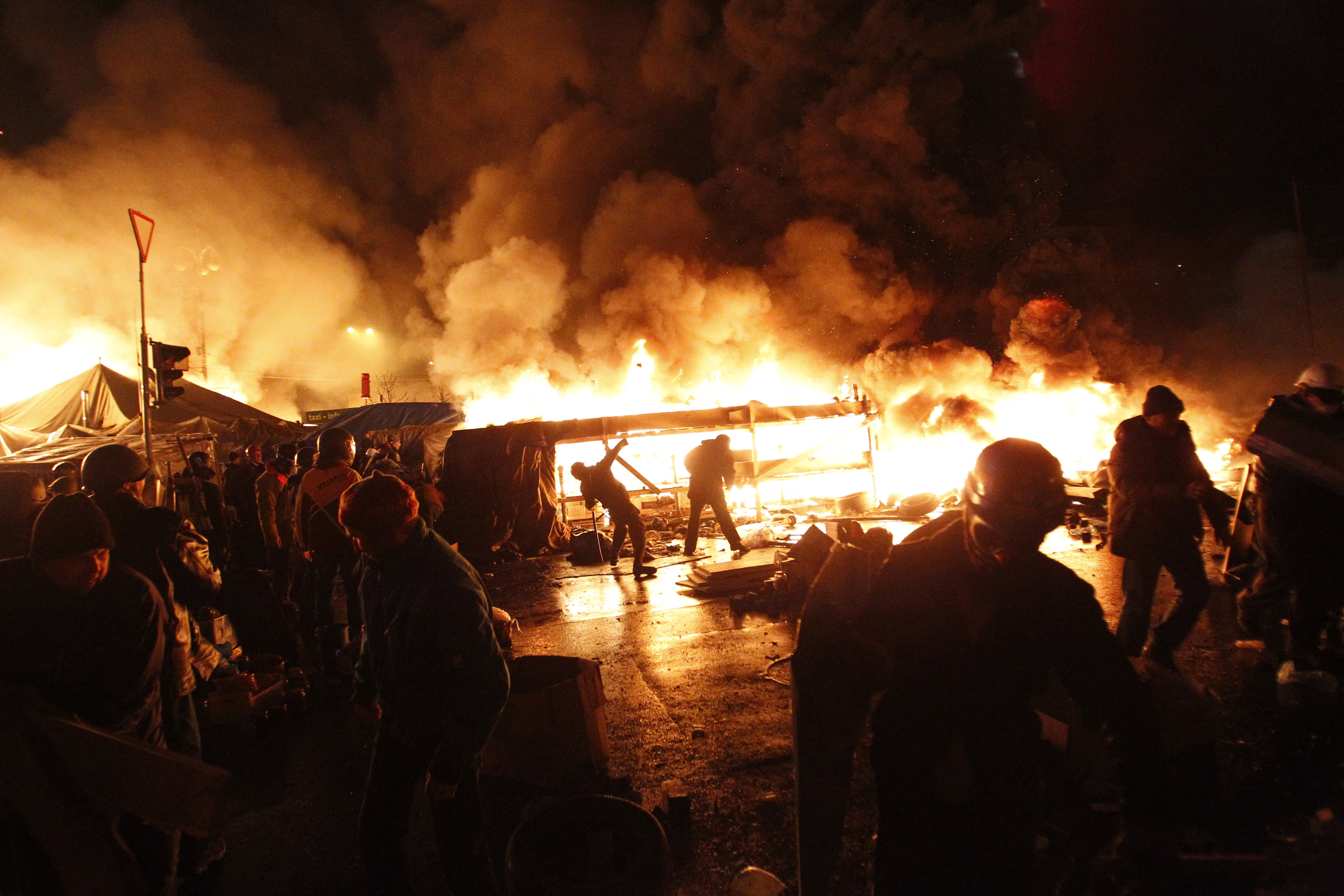 Updated at 5:35 p.m. ET
Following deadly clashes between protesters and police on the streets of Ukraine’s capital, President Obama said Wednesday that the United States "condemns in the strongest terms the violence that’s taking place."
"We have been deeply engaged with our European partners as well as the Ukrainian government and the opposition to try to ensure that that violence ends," Mr. Obama said, shortly after arriving in Toluca, Mexico for an economic summit.
The U.S., he said, holds the Ukrainian government primarily responsible for dealing with peaceful protestors in an appropriate way. Hours later, a statement on Ukraine's presidential website said that President Viktor Yanukovych met with opposition leaders and that the two sides called for a truce, the Associated Press reports. However, the statement gave no details of what the truce would entail or how it would be implemented.

Mr. Obama said that over the next several days, "we’re going to be watching closely, and we expect the Ukrainian government to show restraint, to not resort to violence in dealing with peaceful protestors." He added, "We've also said we expect peaceful protestors to remain peaceful and we’ll be monitoring very closely the situation, recognizing that with our European partners and the international community there will be consequences if people step over the line."

Secretary of State John Kerry and other Obama administration officials said earlier that the United States is considering sanctions against those involved should Yanukovich fail to open up a dialogue with the opposition.
“President Yanukovich has the opportunity to make a choice, a choice between protecting the people that he serves -- all of the people -- and a choice for compromise and dialogue, versus violence and mayhem,” Kerry said from Paris after meeting with French Foreign Minister Laurent Fabius. “We believe the choice is clear, and we are talking about the possibility of sanctions or other steps with our friends in Europe and elsewhere in order to try to create the environment for compromise.”
The State Department later on Wednesday announced it has revoked visas and banned visa issuance to 20 senior members of the Ukrainian government and other individuals considered responsible for or implicit in human rights abuses related to the political repression in Ukraine.

The clashes in Kiev left at least 25 people dead and hundreds injured, raising the fears of a civil war. Tuesday’s violence was the worst Ukraine has seen since anti-government protests started nearly three months ago, after Yanukovych rejected a long-anticipated deal with the European Union in exchange for a $15 billion bailout from Russia. Protesters want to enact constitutional reforms that would limit the president's power. CBS News correspondent Holly Williams reports from Kiev that overnight there were accusations that live ammunition was fired, though both sides denied it.

Mr. Obama said of the conflict, “Ultimately our interest is to make sure the Ukrainian people can express their own desires, and we believe a large majority of Ukrainians are interested in an integration with Europe and the commerce and cultural exchanges that are possible for them to expand opportunity and prosperity.”

The European Union has threatened to impose sanctions against Ukrainian officials responsible for the violence.

Ben Rhodes, President Obama’s deputy national security adviser, said Wednesday the U.S. will coordinate with the E.U. over what, if any, actions will be taken.

“We have made it clear we would consider taking action against individuals who are responsible for acts of violence within Ukraine,” Rhodes said from Air Force One, on which he was traveling with the president to Mexico. “We have a toolkit for doing that that includes sanctions.”

He made the point that they hope to use the threat of sanctions to induce better behavior.

“Events like what we saw yesterday are clearly going to impact our decision making,” Rhodes said. If, on the other hand, the government pulls back, releases prisoners and pursues dialogue with the opposition, “that would obviously factor into our calculus as well.”

Kerry similarly said, “Our desire is for Mr. Yanukovich to bring people together, dialogue with the opposition, find the measure of compromise, and put the broad interests of the people out front. We are convinced there is still space for that to happen.”

Vice President Joe Biden has spoken to Yanukovich at least three times since Jan. 23, telling him that government forces must de-escalate the violence. Mr. Obama on Wednesday expressly said the U.S. wants to make sure that “the Ukrainian military does not step into what should be a set of issues that can be resolved by civilians.”
If armed forces became involved in the crackdown, imposing sanctions against those involved would include a cut off of military-to-military relations, CBS News National Security Correspondent David Martin reports. There are about 30 members of the U.S. military in Ukraine, including everyone from guards at the embassy to members of the defense attache’s office, and well as a few visitors from the European Command. The Pentagon is not making any plans for an emergency evacuation of Americans.
After his meeting with Kerry, Fabius said he is traveling to Kiev on Thursday with the German and Polish foreign ministers to assess the situation before heading to Brussels for an emergency E.U. meeting.