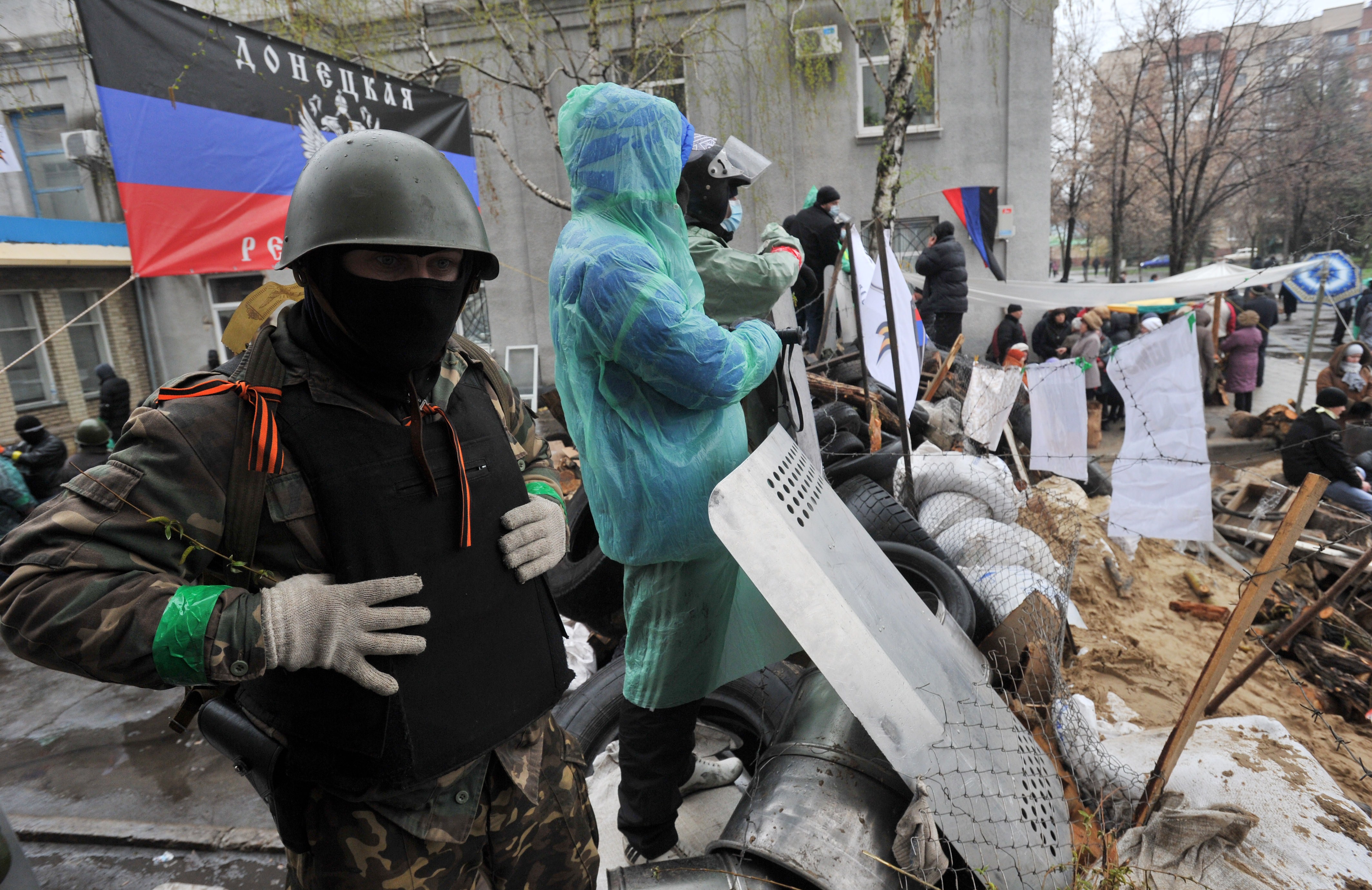 DONETSK, Ukraine -- Pro-Russian separatists on Monday seized a police building in yet another city in Russian-leaning eastern Ukraine, defying government warnings that it was preparing to act against the insurgents.

Dozens of angry men hurled rocks, smashed the windows and broke into a police station in the city of Horlivka not far from the border with Russia, while hundreds of onlookers cheered them on. Thick white smoke rose from the entrance to the building.

The events in Horlivka were the latest sign of trouble in Russian-speaking eastern and southern regions, in which pro-Russian gunmen have seized a number of government buildings demanding more autonomy from the central government and closer ties with Russia.

Ethnic Russians in Ukraine's east fear that the country's new pro-Western government will oppress them, and are demanding to have referendums on autonomy and possible annexation by Russia.

"The fact is that many of the armed units that we've seen were outfitted in bulletproof vests, camouflage uniforms with insignia removed," U.S. Ambassador Samantha Power said. "These armed units ... raised Russian and separatist flags over seized buildings and have called referendums and union with Russia. We know who is behind this."

Kiev authorities and Western officials have accused Moscow of instigating the protests, saying the events echoed those in Crimea, which was annexed by Russia last month. Ever since pro-Russian President Viktor Yanukovych fled to Russia in late February, Russia has demanded constitutional reforms that would turn Ukraine into a loose federal state.

After staunchly refusing such demands, acting President Oleksandr Turchynov indicated Monday that holding a nation-wide referendum on the nation's status was a possibility and that such a vote could be conducted on May 25, along with presidential elections, the Interfax news agency reported.

Meanwhile, a deadline set by the Ukrainian government for pro-Russian gunmen to leave government buildings in eastern Ukraine and surrender weapons passed early Monday, with no immediate sign of any action to force the insurgents out.

Turchynov had issued a decree Sunday that those protesters who disarm and vacate government offices in several cities in the Russian-leaning east of the country by 0600 GMT Monday would not be prosecuted. Turchynov vowed that a "large-scale anti-terrorist operation" would take place to re-establish control over those areas and that the fate of the Crimean Peninsula, annexed by Russia last month, will not be repeated.

There was no immediate comment from the government on the deadline passing.

Ukrainian special forces exchanged gunfire with a pro-Russia militia in the flashpoint eastern city of Slovyansk on Sunday, and at least one security officer was killed and five others wounded.


But Serhiy Taruta, governor of the Donetsk region, where government buildings in several cities, including the regional capital Donetsk, have been seized by pro-Russian gunmen, said an anti-terrorist operation was underway in the region, according to the Interfax news agency.

Taruta did not give any details of what the anti-terrorist operation would entail. The governor usually does not have authority to launch anti-terrorist measures on his own and he was likely acting on the orders of top security officials in Kiev.

Taruta said the anti-terrorism measures were aimed at "protecting the peace and order on our land, which today is being taken away from us by armed, aggressive fanatics cynically and cold-bloodedly," he was quoted as saying. "They are terrorists and we will not let them rule on our land." He did not provide any details of the operation.

Far from Taruta's account, CBS News' Holly Williams reported that in the city of Donetsk, the Russian flag was still flying over many government buildings, and many people gathered in the streets seemed eager for a Russian intervention.

A woman who said she was a laid-off steel worker told Williams she was hoping for a peaceful resolution to the crisis, but if that didn't happen, she wanted eastern Ukraine to become part of Russia.

Russia has tens of thousands of troops massed along Ukraine's eastern border, and there are fears that Moscow might use the violence in the mainly Russian-speaking region as a pretext for an invasion, in a repeat of events in Crimea weeks ago.


The West has accused Moscow of fomenting the unrest. Ukraine's ousted president, Viktor Yanukovych, claimed that the Kiev government was coordinating its actions with the CIA.

Russia has warned the Kiev government against using force against the protesters in the east and has threatened to cancel in international diplomatic conference on the Ukrainian conflict scheduled for later this week.