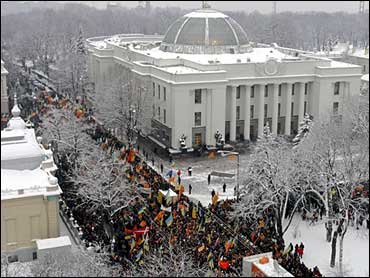 Viktor Yushchenko's campaign chief Oleksandr Zinchenko accused the authorities of trying to drag out the talks, Interfax reported. Yushchenko supporters had been discussing a compromise with representatives of Prime Minister Viktor Yanukovych, the declared winner of the Nov. 21 runoff vote.

Yushchenko and Western nations, including the United States, say the election was marred by massive fraud.

However, the parliamentary speaker said that nonbinding declaration would not be rescinded.

Meanwhile, Ukraine's Supreme Court resumed its probe into election results, while regional leaders in the east backpedaled on threats to resist central rule if the opposition leader is declared president.

Ukraine's government has been paralyzed since the Nov. 21 presidential runoff sent hundreds of thousands into the streets of the capital for round-the-clock protests to Yushchenko.

Foreign leaders stressed the need for a peaceful settlement. European Union foreign policy chief Javier Solana was expected in Kiev Tuesday night on his second visit in a week, and was to be joined Wednesday by Polish President Aleksander Kwasniewski.

The two planned to meet with the rival candidates on Wednesday, the European Commission's Kiev office said.

Outgoing President Leonid Kuchma has said he would support a repeat vote to pull Ukraine out of the crisis.

In an apparent bid to compromise, Yanukovych said that if he becomes president, he will offer Yushchenko the post of prime minister. But Yushchenko quickly brushed off the offer, saying he wanted to focus on alleged vote fraud.

"The election was rigged," he said. "People are asking whether this country has a political elite capable of upholding a fair vote."

Yanukovych has said he would support a revote if allegations of fraud are proven but that he had yet to see such proof. On Tuesday, he even suggested he could withdraw from the race if his rival did - an idea Yushchenko would also likely reject.

The risk of Ukraine splitting seemed to dissipate after the eastern Donetsk region said it would not hold its referendum on self-rule as planned Sunday. The Kharkiv regional legislature also retracted its threat to introduce self-rule.

Donetsk Governor Anatoliy Bliznyuk said his region was seeking "not autonomy, but to become a republic within Ukraine." He said the referendum would be held within the next two months.

In parliament, speaker Volodymyr Lytvyn criticized "many state, regional and local officials in the east and south of the country for inciting separatism ... and unconstitutional and illegal aspirations for independence and autonomy."

Parliament failed to pass a vote of no-confidence in the government. Only 196 of the 410 lawmakers present supported the measure – less than the 226 votes needed.

But angry opposition protesters tried to storm the building, and Lytvyn adjourned the session until Wednesday, promising parliament would not cancel its previous decision.

The Supreme Court continued to hear an opposition appeal to annul the Nov. 21 election results, which found Yanukovych the winner with a margin of 871,402 votes. Under Ukrainian legislation, the court cannot rule on the overall results but can declare results invalid in individual precincts.

The appeal focuses on results from eight eastern and southern regions more than 15 million votes, almost half of the total cast in the runoff.

Yushchenko's lawyers cited turnout of above 100 percent in hundreds of precincts in Donetsk and Luhansk, problems with voting lists and multiple voting with absentee ballots. The opposition also asked the court to name Yushchenko the winner based on his winning a narrow plurality of the votes in the first round on Oct. 31.

Kuchma's support for a rerun of the election indicated the government was feeling mounting pressure. The West has refused to recognize the election results, while Russia which still yields considerable influence over Ukraine congratulated Yanukovych and complained of Western meddling.

Speaking to German Chancellor Gerhard Schroeder, Russian President Vladimir Putin reiterated that the dispute must be resolved under Ukrainian law and not under external or internal pressure, according to the Kremlin.

The political crisis has led to fears that Ukraine, which has the fastest growing economy in Europe, could plunge into economic turmoil. Many Ukrainians have waited in long lines to exchange the national currency, hryvna, for U.S. dollars, and there have been warnings of runs on bank deposits.