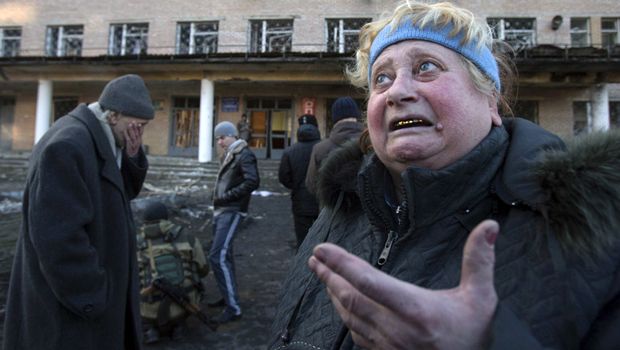 The fighting between Russia-backed separatists and government troops in eastern Ukraine escalated sharply in January, with more than 220 civilians killed in the past three weeks alone, according to the United Nations. The world body has sharply criticized both sides for indiscriminate shelling that is causing civilian deaths.

The rebel-run Donetsk News Agency, citing police, reported five people killed by shelling around the hospital in the city's western Tekstilshchik district. City officials in Donetsk said the number of casualties could not immediately be established.

An Associated Press reporter at the scene shortly after the attack found one body covered by a sheet on the ground near a crater from a projectile. The hospital was damaged by shrapnel and its windows were shattered.

"There were six or seven explosions," said witness Vladimir Oryol. "We fell on the ground, people were screaming. In fact, it was very scary and horrible."

Separatist official Eduard Basurin told reporters that four civilians had been killed in the past day before Wednesday's shelling. In Kiev, military spokesman Vladislav Seleznev said two Ukrainian troops have been killed and 18 injured in the past 24 hours.

With U.S. Secretary of State John Kerry headed to Kiev on Thursday, Ukrainian President Petro Poroshenko said he was confident that the United States would agree to give weapons to Ukraine's army for its fight against the rebels, which has left more than 5,300 people dead since April.

President Obama has opposed providing lethal assistance, but the surge in fighting has reportedly spurred the White House to review the policy.

"I don't have the slightest doubt that the decision to supply Ukraine with weapons will be made by the United States as well as by other partners of ours, because we need to have the capability to defend ourselves," Poroshenko said on a visit to Kharkiv, a government-controlled city in eastern Ukraine.

Germany and France strongly oppose the idea, however. German Chancellor Angela Merkel's spokesman indicated the issue would be discussed up when Merkel meets Mr. Obama in Washington next week.

"We will not deliver any lethal weapons," Merkel spokesman Steffen Seibert said Wednesday. "We are convinced that there can be no military solution to this already very bloody conflict."

European Union foreign policy chief Federica Mogherini called for the withdrawal of heavy weaponry from Ukrainian cities and a truce for at least three days to ensure the evacuation of civilians from the war zone.

"The spiral of ever-increasing violence in eastern Ukraine needs to stop," she said. "The shelling of civilians, wherever it happens, is a grave violation of international humanitarian law."