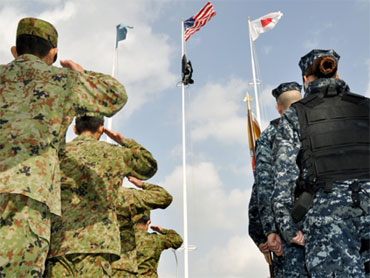 Police have arrested a third man in south London as part of their investigation into the attempted bombings of three subways cars and a bus on July 21, an official said Sunday.

But CBS News Correspondent Richard Roth reports that police are said to believe the four men who actually placed the bombs are still at-large, and they're calling the manhunt a race against time.

Metropolitan Police Commissioner Sir Ian Blair also said there were similarities between the explosives used in Thursday's failed bomb attacks and those detonated July 7. But he said investigators still had no proof the two strikes were linked.

"The equipment in the bombs had all the elements that it should have but it didn't work," Blair told Sky News TV, referring to the explosives that failed to detonate properly Thursday on three subway cars and a double-decker bus.

"It had some similarities" to the devices used in the July 7 bombings on three subway trains and a double-decker bus, killing 56 people, including four suicide attackers.

When asked if Thursday's attacks were connected to those of July 7, Blair replied, "We have no proof that they are linked but clearly there is a pattern here."

Two of the suspected July 7 bombers, Mohammad Sidique Khan and Shahzad Tanweer, went whitewater rafting in Wales three days before the attacks, according to the National Whitewater Centre.

Police refused to comment on a British Broadcasting Corp. report, attributed to unidentified officials, that authorities were examining whether those involved in Thursday's attacks were on the same trip.

Police carried out several controlled explosions to dispose of a suspect package found in northwest London, which they said may have been linked to devices used in the botched July 21 attacks. They refused to elaborate.

Meanwhile, London's police commissioner expressed regret Sunday for the slaying of a Brazilian electrician by officers who mistook him for a suspect in the recent terror bombings, but he defended a police shoot-to-kill policy as "the only way" to stop would-be suicide bombers.

The man shot Friday at the Stockwell subway station was identified as Jean Charles de Menezes, 27. Witnesses said he was wearing a heavy, padded coat when plainclothes police chased him into a subway car, pinned him to the ground and shot him five times in the head and torso in front of horrified passengers.

Blair initially said Menezes was "directly linked" to the investigation of Thursday's attacks, but police then said Saturday he had no connection to the bomb attempts.

"This is a tragedy," Blair said Sunday of the shooting. "The Metropolitan Police accepts full responsibility for this. To the family, I can only express my deep regrets."

He also defended the shoot-to-kill policy, saying such action only applied when lives were believed to be at risk.

The shooting has added to the pressure on a police force that's already stressed, Roth reports. The head of Scotland Yard has said he won't change the groundrule: "Shoot to kill, in order to protect."

Dr. Azzam Tamimi, of the Muslim Association of Britain, told CBS News Correspondent Elizabeth Palmer that tensions are high in the Muslim community.

"We're not judging the police here. We're not judging anybody. We're simply worried and simply anxious. I'm reflecting the anxiety the deep anxiety of the community since yesterday," he said.

"I am very aware that minority communities are talking about a shoot-to-kill policy," he said. "It's only a shoot-to-kill-in-order-to-protect policy."

Blair said British police have drawn from the experiences of other countries, including Sri Lanka, dealing with suicide attackers.

"The only way to deal with this is to shoot to the head," Blair said. "There is no point in shooting at someone's chest because that is where the bomb is likely to be."

Blair spoke of the problem his officers faced.

Police said Menezes attracted police attention because he left a building that was under surveillance after Thursday's attacks. They said he was then followed by surveillance officers to the station, and his clothing and behavior at the station added to their suspicions. Menezes was wearing a heavy coat while temperatures were in the 70s.

Brazilian Foreign Minister Celso Amorim, who was visiting London, said his government and people were "shocked" by the killing, and he demanded a thorough investigation.

"We cannot recover the life of the Brazilian citizen who died but it is very important to know all the details," Amorim said after meeting with a British official.

Menezes was originally from the small city of Gonzaga, some 500 miles northeast of Sao Paulo. Local authorities said he was Catholic.

Menezes was an electrician who had worked in Britain for three years, said his cousin, Alex Pereira, who also lives in London.