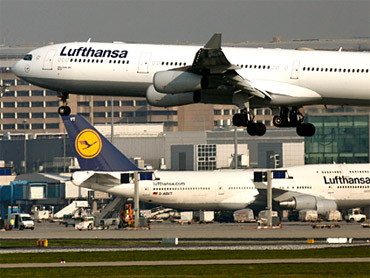 The first flight has landed at London's Heathrow Airport - Europe's busiest hub - since airspace across the continent was closed by ash spewed from a volcano in Iceland.

Many European flights took to the skies Tuesday as airports slowly reopened, but the travel chaos was far from over: A massive flight backlog was growing and scientists feared yet another eruption.

A flight from Vancouver landed at London's Heathrow around 5 p.m. - the first since flight paths were closed after Iceland's Eyjafjallajokull volcano erupted Wednesday.

The first passenger out of the airport was Neil Rodgers, a group finance director from England who had been stranded in Vancouver, Canada, for five days, CBS News reports. Rodgers told CBS News that his flight, British Airways 084, was held in a holding pattern over the U.K. while the pilots were directed where to land.

Rodgers said it was "great to be home."

British Airways said it hoped about 24 other flights bound from the United States, Africa and Asia would land later Tuesday at Heathrow.

European terminals lurched back to life while the danger from Iceland's volcanic ash plume eased.

CBS News Correspondent Mark Phillips reports that about 13,000 - roughly half - of Europe's flights operated Tuesday, most of them in the south away from the ash cloud. It was a brief glimpse of what used to be normal.

So far, the ash cloud has cancelled 95,000 flights, affecting an estimated 8 million passengers worldwide, according to the CBS Travel Editor Peter Greenberg. "They're herding cats right now. The problem is they've got to put planes back in places they need to be; they have to put flight crews together with planes, and they're not together. They're out of sequence and out of cycle. This could take at least 96 hours just to get the planes where they need to be."As business at Heathrow resumes, the government may ease the rules, allowing nighttime flights to help ease the backlog.Forecasters on Tuesday said they don't expect this ash cloud to impact American air space, but it's already had a damaging effect on the U.S. economy. One estimate said the economy has suffered $650 million in losses so far, $130 million a day for nearly a week.

Willie Walsh, British Airways chief executive, said it may take some hours for normal services to resume. "It will be a difficult task - this is an airlift that has been unprecedented, but we will make every effort to get our passengers home," Walsh said.

But forecasters said more delays to flights bound for Europe were possible. Airspace in Germany remained largely closed until 8 p.m. ET but about 800 flights were allowed to fly at low altitude.

It was the first day since Iceland's Eyjafjallajokull volcano erupted Wednesday that travelers were given a glimmer of hope.

Cheers and applause broke out as flights took off from Paris' Charles de Gaulle Airport, Amsterdam and elsewhere.

"Everyone was screaming in the airplane from happiness," said Cypriot Savvas Toumarides upon arrival in New York, after waiting for five days in Amsterdam, missing his sister's wedding. He said the worst part was "waiting and waiting and not knowing."

"We were in the hotel having breakfast, and we heard an aircraft take off. Everybody got up and applauded," said Bob Basso of San Diego, who has been stranded near Charles de Gaulle since Friday.

The Eurocontrol air traffic agency in Brussels said it expected just under half of Europe's 27,500 flights to go ahead Tuesday, a marked improvement over the last few days. The agency predicted close to normal takeoffs by Friday.

"The situation today is much improved," said Brian Flynn, deputy head of operations at the Brussels-based agency.

But with more than 95,000 flights canceled in the last week alone, airlines faced the enormous task of working through the backlog to get passengers where they want to go - a challenge that could take days or even weeks.

"I'm supposed to be home, my children are supposed to be in school," said Belgian Marie-Laurence Gregoire, 41, who was traveling in Japan with her husband and three children, ages 6, 8, 10. They said the best that British Airways could do was put them on a flight to Rome.

Although seismic activity at the volcano has increased, the ash plume appeared to be shrinking Tuesday. Still, scientists were worried that the activity could trigger an even larger eruption at the nearby Katla volcano, which sits on the massive Myrdalsjokull icecap and has erupted every 80 years or so - the last time in 1918.

"The activity of one volcano sometimes triggers the next one, and Katla has been active together with Eyjafjallajokull in the past," said Pall Einarsson, professor of geophysics at the Institute of Earth Sciences at the University of Iceland.

At eruption at Katla could spark similar travel disruptions, depending on the prevailing winds. But in Iceland's eight volcanic eruptions in the last 40 years, only the recent one at Eyjafjallajokull was followed by winds blowing toward northern Europe.

An international pilots group warned of continued danger because of the ash, which drifted over the North Sea and was being pushed back over Britain on Tuesday by shifting north winds.

A Eurocontrol volcanic ash map on Tuesday listed the airspace between Iceland, Britain and Ireland as a no-fly zone, along with much of the area around the Baltic Sea. The ash cloud also spread westward from Iceland, toward Greenland and Canada's eastern coastline.

Still, planes were being allowed to fly above 20,000 feet over the United Kingdom.

Herbert Puempel at the World Meteorological Organization in Geneva said there was a small possibility that some far-flung airports on the Canadian east coast, such as Goose Bay or Thunder Bay, might be affected by the ash but said "a serious effect on the eastern seaboard I think is very unlikely."

The volcano was also grumbling - tremors, which geologists believe to be caused by magma rising through the crust, can be heard and felt as far as 16 miles from the crater.

"It's like a shaking in the belly. People in the area are disturbed by this," said Kristin Vogfjord, geologist at the Icelandic Met Office.

Scottish airports let in a handful of domestic flights, while Switzerland and northern Italy also opened their airspace. Some flights took off from Asia to southern Europe and came in from Cairo, where at least 17,000 people had been stranded.

Airports in central Europe and Scandinavia were open and most of southern Europe remained clear. Spain volunteered to be an emergency hub for overseas travelers trying to get home and piled on extra buses, trains and ferries to handle the expected crush.

Britain sent a navy ship to Spain to fetch 500 troops coming home from Afghanistan and pick up hundreds of passengers stranded by the chaos.

"How many modes of transport have I been on? I have lost count now," said Angus Henderson, 40, of the 1st Battalion, Royal Welsh, an infantry unit. "Planes, buses and now ships."

Henderson was pressing to get back to Britain to see his wife and three small kids and attend the funeral of a colleague killed in Afghanistan. But the trip on the HMS Albion, a 570-foot amphibious assault ship, will take 40 hours from Santander in northern Spain to Portsmouth, England.

Patricia Quirke of Manchester said she and nine other families drove all night across Spain just to catch the Royal Navy ride.

Many Asian airports and airlines remained cautious, and most flights to and from Europe were still canceled. Australia's Qantas canceled its Wednesday and Thursday flights from Asia to Frankfurt and London, as well as return flights to Asia, saying the situation was too uncertain.

The aviation industry - facing losses of more than $1 billion - has sharply criticized European governments' handling of the disruption that grounded thousands of flights on the continent. But its first order of business was to cut down that flight backlog.

"We've never had a backlog like this before," said Laurie Price, director of aviation strategy at consultant Mott Macdonald.

Spain's main airline Iberia said it was using bigger planes and adding extra flights to help stranded passengers get to their destinations. Other airlines were hiring buses to help customers get home.

Most airlines said they would let passengers with tickets for a departing flight this week go first, but offered to rebook customers on another plane for no additional cost.

British Airways, which has canceled about 500 flights a day for the past five days, said it was trying to clear its backlog on a case-by-case basis. It said travelers could either rebook online or claim a full refund, and it also urged travelers booked to fly this week to consider canceling their trips so the airline could fly more people home.

In the end, many people did not get a flight out Tuesday.

"Hope is high at the minute just because it's the only thing we've got," he said.

Gideon Ewers, spokesman for a London-based pilots group, said historical evidence of the effects of volcanic ash demonstrates that it presents a very real threat to flight safety.

Ash and grit from volcanic eruptions can sabotage a plane, stalling engines, blocking fuel nozzles and plugging the tubes that sense airspeed.

"Our members have many firsthand experiences of the extremely abrasive and clogging effects of such clouds," he said.

Authorities said Monday that test flights had shown the concentration of ash in the atmosphere had reduced considerably and posed no risk to air travel.

The argument now is about how much volcanic dust a modern jet engine can actually tolerate, reports CBS News correspondent Mark Phillips.

Experts aren't sure what amount of volcanic ash - made up of sand and tiny abrasive glasslike particles - is dangerous to jet engines and what density is safe. And for that matter, they can't say how much of the ash is floating in any one spot along the air traffic routes or where it is specifically going next.

Former NTSB director Peter Goelz says the planes flown in the sporadic flights on Tuesday will be closely analyzed for engine damage.