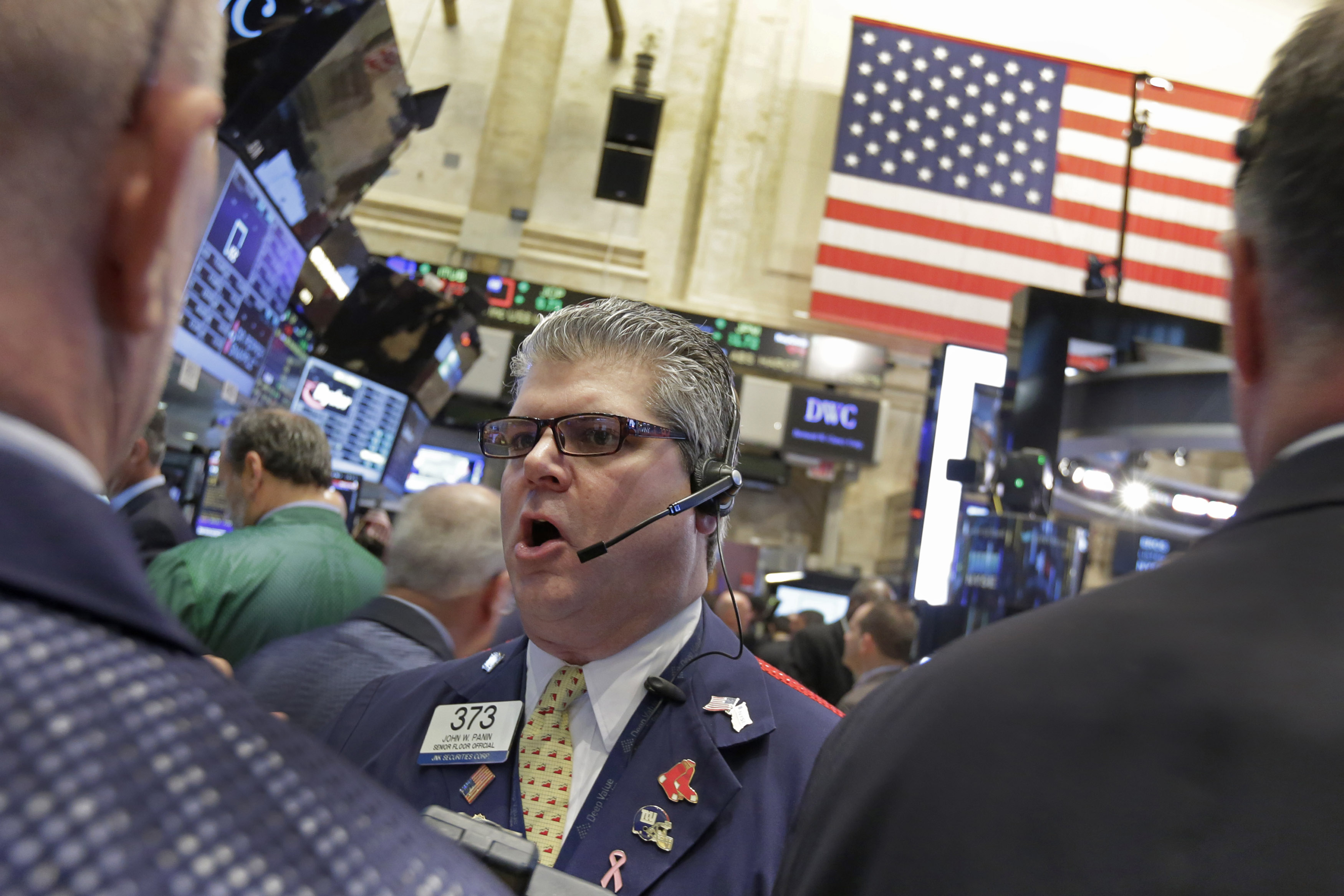 Ryder System (R) led industrial stocks lower after the transportation and logistics company cut its profit forecast for the third quarter. Molson Coors (TAP) surged on speculation that a tie-up between the world's two largest brewers would give it an opportunity to expand its own business.

Twitter's stock ended up 31 cents, or 1.1 percent, to $29.06 after the company announced that it was laying off about 8 percent of its workforce, signaling new CEO Jack Dorsey's resolve to slash costs while the company struggles to make money. The social media company has never turned a profit in its nine-year history.

The stock market started October with strong gains, rebounding from a big slump in the previous two months as investors worried about a slowing Chinese economy. This week investors are focusing on corporate earnings as they try and measure the impact that slowing global growth is having on profits.

Companies that are focused on the U.S. are likely to do well as consumer confidence improves, said Jerry Braakman, chief investment officer of First American Trust.

"It's been a rally here, and the question is: 'Is this just a bounce?'" Braakman said. "The earnings season will help us a little with that. Looking at the consumer numbers here in the U.S., they are still very strong."

Stocks started the day lower after a report showed that China's imports fell in September by an unexpectedly wide margin. Imports dropped 20.4 percent after a 5.5 percent decline in August. It was the latest sign of weakness in the country's economy and indicates anemic demand in the world's second-biggest economy.

"We don't think that this is a hard landing (for China's economy) in the making," said Stephen Freedman, Senior Investment Strategist, UBS Wealth Management Americas. "But we do acknowledge that there has been some spillover into the U.S."

Among individual stocks, Ryder System was the biggest decliner in the S&P 500. The transportation and logistics company cut its earnings forecast for the third quarter, blaming lower-than-forecast growth at a unit that provides services to companies that own and operate truck fleets. Its stock dropped $7.02, or 9.3 percent, to $68.63.

Chemicals company FMC (FMC) fell $1.18, or 3.1 percent, to $36.35. The company lowered its earnings outlook late Monday and will lay off up to 850 workers, citing the rapid devaluation of the Brazilian real. The falling real is hurting its agricultural solutions business and FMC said it can't raise prices fast enough to compensate. The company makes almost a quarter of its sales in Brazil.

Overall, earnings for companies in the S&P 500 are forecast to contract by 5.4 percent for the third quarter, according to S&P Capital IQ. Much of the slump is attributable to a collapse in earnings at energy and material companies, where profits are shrinking as oil and commodity prices have plunged.

Molson Coors was the biggest gainer in the S&P 500.

The brewing company surged after AB InBev (BUD) announced that it had reached an agreement to buy SABMiller. If the deal goes ahead, Molson Coors may get the opportunity to buy full ownership of its MillerCoors joint venture, which sells beers including Miller Lite, Coors Light and Blue Moon in the U.S. Molson Coors' stock jumped $7.83, or 9.9 percent, to $86.58.

Government bond prices rose, pushing the yield on the 10-year Treasury note down to 2.04 percent. The euro strengthened to $1.1384, while the dollar weakened to 119.76 yen.

The price of oil slipped Tuesday. Benchmark U.S. crude fell 44 cents to close at $46.66 a barrel on the New York Mercantile Exchange. Brent crude, used to price international oil, fell 62 cents to $49.24 a barrel in London.

In other energy futures trading on the NYMEX: