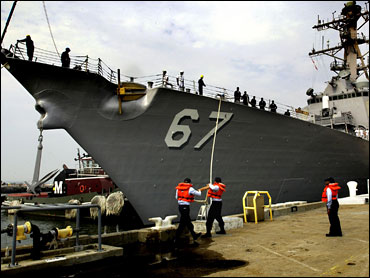 The Navy has sent the guided missile destroyer Cole to the Gulf of Aden in response to the attack on the Saudi frigate.

The destroyer is the same warship that suffered heavy damage in an al Qaeda bombing attack in Yemen in 2000 that killed 17 sailors.

Al Qaeda in Yemen, long seen by Washington as of the most dangerous of the group’s offshoots, has exploited the chaos of Yemen’s civil war to seize territory in the country’s south and east, and the Islamic State group has also claimed attacks.

U.S. Central Command (CENTCOM) said Wednesday that civilian non-combatants were likely killed in the Jan. 29 raid, and that ”casualties may include children”.