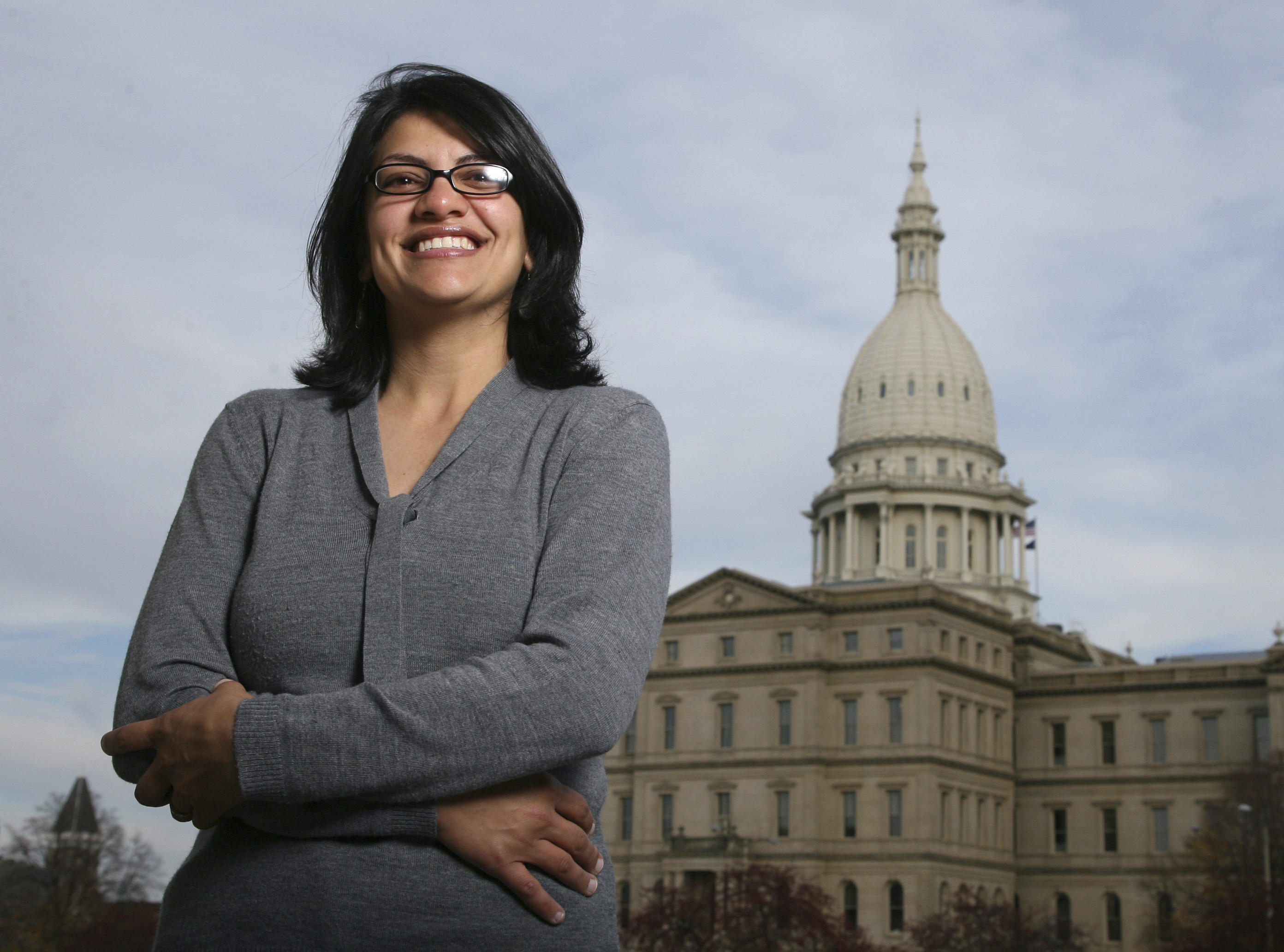 A U.S. House candidate was arrested Tuesday in Detroit during a protest for higher pay and the right to form unions.

Democrat Rashida Tlaib and more than a dozen other demonstrators sat at — and banged on — a long table that took up a lane of traffic in Detroit's Midtown. They were part of a group of several hundred people who marched along the street before gathering outside a McDonalds. Management inside locked the doors as marchers approached.

The protest followed one Tuesday morning in Flint where eight people were injured after being struck by a pickup truck as they marched outside another fast-food restaurant. Flint Police Chief Tim Johnson said he doesn't believe the crash was intentional and that the driver "seemed pretty shaken up" afterward.

Both protests were organized by Fight for $15, a national movement seeking to increase the minimum wage to $15 an hour for fast food, child care, airlines and other workers. The group also wants the right to start unions or join existing ones.

Walkouts are planned in Milwaukee on Wednesday and Chicago on Thursday. On Thursday, higher education workers are expected to join fast-food workers in a protest in Miami.

"I don't know about you all, but something happens to the soul when you say 'shut it down,'" Tlaib, 42, told the crowd in Detroit. "Because you don't deserve anything less than better worker conditions, to not having to live in poverty. You deserve $15. These corporations are making billions off of our backs. Don't you ever think that you're not allowed to ask for more."

She and 17 other protesters were later handcuffed or zip-tied and led away by police to a waiting bus for processing at a detention center. They were expected to be ticketed later Tuesday and released, according to Deputy Police Chief Elvin Barren. They each face a misdemeanor disorderly conduct charge.

Tlaib squares off with opponents from the Green and Working Class parties in the race for the 13th District House seat that covers part of Detroit and some suburbs.

Officeholders and hopefuls who are taking part in the protests "understand that there are too many overworked and underpaid Americans," said Mary Kay Henry, Service Employees International Union president.

Michigan's Republican-led Legislature voted last month to gradually increase the state's $9.25 minimum wage to $12 by 2022 — keeping the initiative from the November ballot — but legislators could water down the law after the election.

Lynete Armstrong, 45, of Detroit, cooks and works the cash register at a local restaurant. She makes about $8 an hour, has no health care through work and takes care of a teenage daughter and two grandchildren.

"It's not enough," said Armstrong, who took part in the protest in Detroit. "If I get $15 an hour at one job, I'm still going to have to get another job."

Henry said change can come at the ballot box. "We are losing patience with an economy that continues to leave us out," she said.

Democrat Gretchen Whitmer, who's battling Republican Attorney General Bill Schuette for governor, took part in the Flint protest. She wasn't injured in the pre-dawn crash and a post on her Twitter account says she's "incredibly sad that so many people were hurt."

The Flint protesters had been walking along the street when some were struck. It was wet and dark, and they wore no reflective gear and didn't have flashlights, Johnson said.

The injuries were not considered life-threatening.