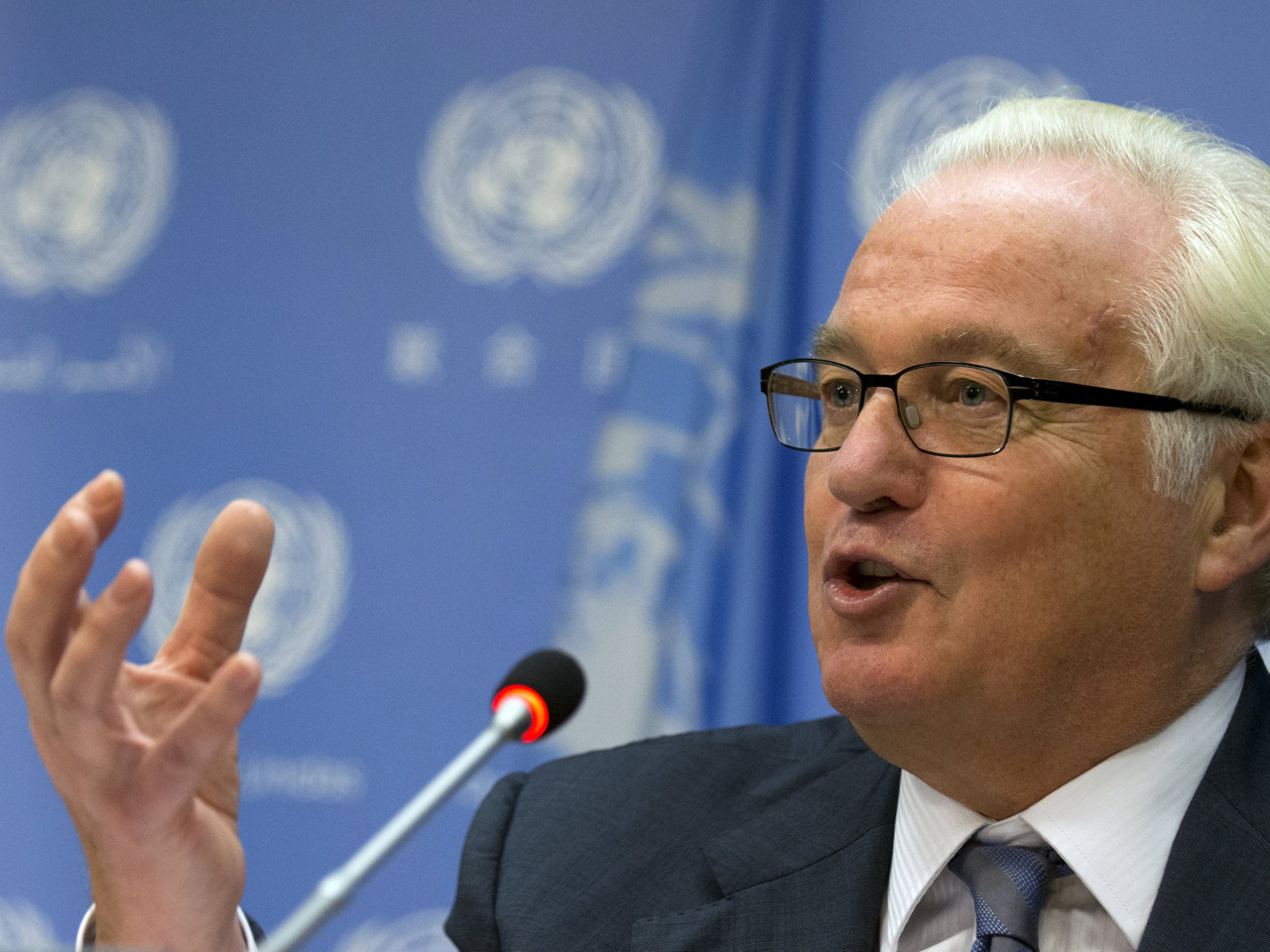 NEW YORK -- The Kremlin has a simple message for the U.S. on Syria, according to Russia's U.N. ambassador: You must talk to us about it.

In an interview with CBS News, Russia's U.N. Ambassador Vitaly Churkin said there's no point in going it alone and assigning blame now, four years after the crisis in Syria began.

With Islamic State of Iraq and Syria (ISIS) gains in the Mideast, and waves of Syrian refugees pouring into Europe, the failure of the international community to contain the Syria crisis will be front and center at the U.N.'s 70th-year annual debate two weeks from now.

There has been as of yet no clear international consensus on how to move forward, and Russia and the U.S. have publicly displayed a clear difference of opinion on a crucial point: whether Syrian President Bashar Assad should stay in power.

The U.S. has said repeatedly Assad must step down for the conflict to be resolved. Just last week, President Obama said Russia's ongoing support for Assad was "a big mistake."

Secretary of State John Kerry called his Russian counterpart, Sergey Lavrov, on Tuesday for the third time in 10 days. One of the things he said was that Assad could never be a "credible member" of the coalition fighting ISIS, but he also said the Obama administration would welcome Russia to become one.

Churkin thinks, however, that America's opinion on Assad in the conflict has evolved behind the scenes, just as the conflict on the ground has changed dramatically since it began.

Churkin's comments come amid speculation that Russia is building up its military presence inside Syria in the hope that it will somehow be part of the international anti-ISIS coalition, thus gaining stature with the U.S. and Europe without diminishing support for Assad, whose family has long been an ally of Moscow.

Asked if the U.S. position was getting closer to the Russian view in Syria, Churkin said: "I think we have. They have made a lot great progress in understanding the complexities of the situation. To me, it is absolutely clear that...one of the very serious concerns of the American government now is that the Assad regime will fall and (ISIS) will take over Damascus and the United States will be blamed for that."

U.S. officials have repeatedly cast doubt on Russia's intentions in Syria. On Monday, the U.S. Ambassador to the U.N., Samantha Power, told CNN: "Doubling down on a regime that gases its people, that barrel bombs its people, that tortures people who it arrests simply for protesting and for claiming their rights -- that's just not going to work. Even if you were Machiavelli and all you cared about was (ISIS,) to support a regime like this and to not take account of the views of the vast majority of the Syrian people that want to go in a different direction is not going to either bring peace or actually succeed in defeating terrorism, which is what President Putin says his priority is."

"Everybody's responsible. It is easy for me to point the finger but I think simply the situation was misjudged from the outset and then it was allowed to degenerate and how far it will go, I don't know," Churkin said.

Power has also lashed out at both China and Russia for blocking "every relevant action in the Security Council, even mild condemnations of the use of chemical weapons that did not ascribe blame to any particular party. In Assad's cost-benefit calculus, he must have weighed the military benefits of using this hideous weapon against the recognition that he could get away with it because Russia would have Syria's back in the Security Council. And on August 21 he staged the largest chemical weapons attack in a quarter century while UN inspectors were sitting on the other side of town."

In what appears to be a new approach, the U.N. Security Council last week authorized, with Russian support, an international investigation between the U.N. and the Organization for the Prohibition of Chemical Weapons to determine who is responsible for the chemical weapons attacks that have targeted civilian populations in Syria. The latest resolution came a month after a consensus statement was issued by the Council calling for talks to end the five year conflict.

The U.S. will host a high level peacekeeping event on September 29 hosted by President Obama. Russia is the president of the Security Council in its monthly rotation, and has set September 30 for a meeting of world leaders on peace and security to be chaired by Foreign Minister Sergei Lavrov.

The Russians want the government of Assad included in any peace negotiations.

One thing that particularly irked the Russians, Churkin revealed, was the failure to negotiate with them on forming the anti-ISIS coalition and, ultimately, to go ahead without the U.N. last year.

Although Churkin said that there are not tangible signs of improvement in the U.S. -Russian relationship, he was positive about the possibility of better relations.

"With additional contacts, and if we make some progress on other issues, in our small way we are trying to contribute," Churkin said. "If we can work together on this it is going to be a small contribution. If somehow we generate political momentum and there is an opportunity for us to make a joint contribution to some progress on the Syrian crisis, that already is going to be a contribution. We will have to work on the implementation on the deal with Iran; this is another opportunity. Hopefully the crisis in Ukraine will be behind us before too long, so some of the irritants then will go away, and maybe a quiet, better atmosphere will be established for our relations."