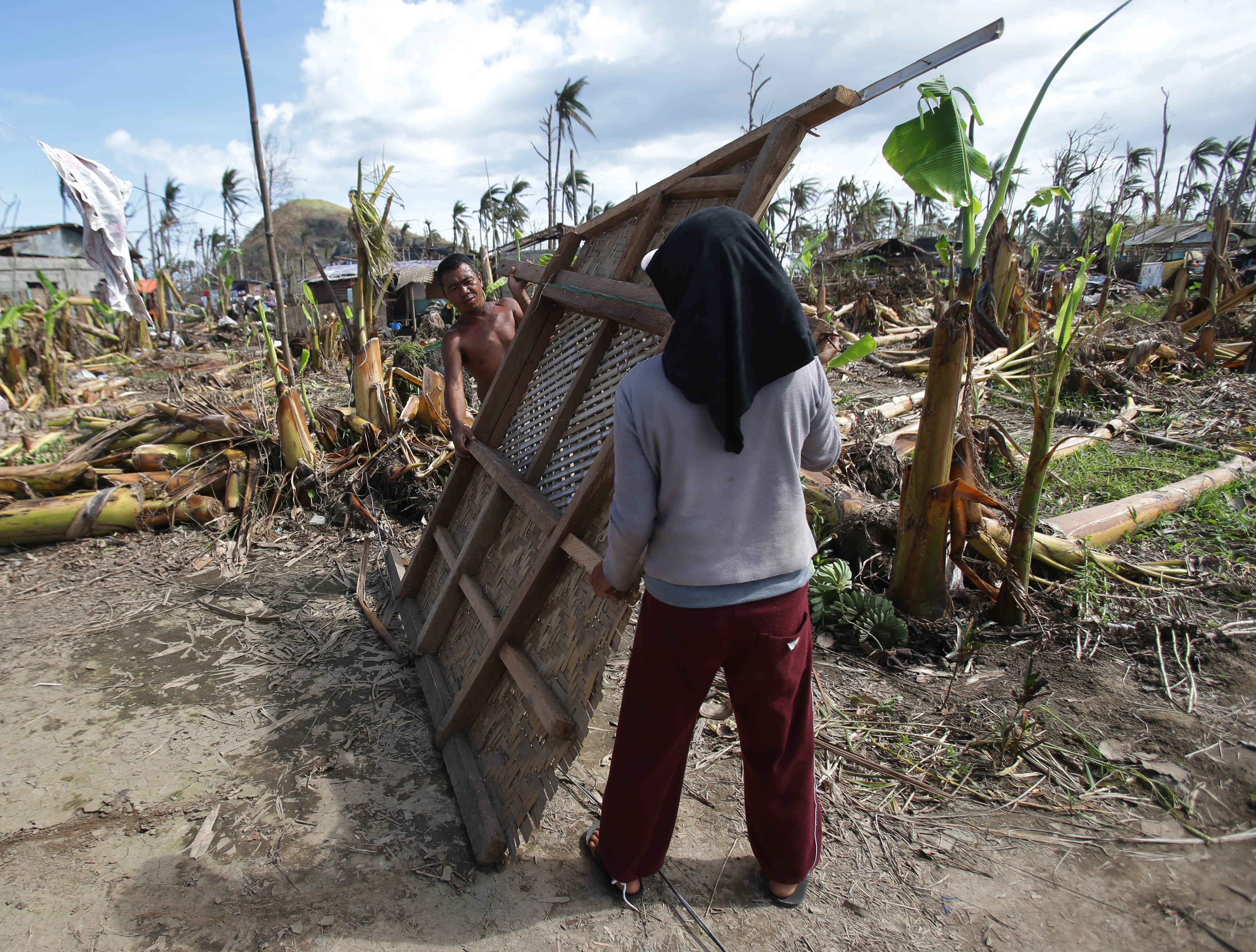 TANAUAN, Philippines - As Typhoon Haiyan tore across the eastern Philippines, coconut plantations older than the fathers of the men who tend them were smashed like matchsticks and call centers that field customer service gripes from around the world fell silent. The storm that killed thousands also wrecked livelihoods in the worst hit region, a blow that will ripple long after the disaster fades from attention.

The workload of call and data centers that are soaked in water and choked with debris has easily been diverted to other Philippine cities. Less simple is the choice faced by thousands of workers: uproot and separate from family or stay in Leyte province and wait perhaps a year for the jobs to return.

Tenant coconut farmers know they must clear flattened trees and replant. It will be three years before the new trees are mature enough to bear fruit.

In Tanauan, 20 kilometers from the coastal city of Tacloban inundated by a storm surge on Nov. 8, coconut farms are a tangle of snapped, uprooted and twisted trees. Farmers say that even trees still standing will die because of damage to their cores.

"Those trees over there have been producing coconuts even before my father was born" said tenant farmer Mario Duma, gesturing at a 3-hectare plot where just a couple of dozen out of 500 coconut trees survived.

"If we get seedlings, we can plant again next year," said Duma, shirtless under the harsh midday sun. "We will really go into hard times if the government will not support us."

The coconut palm is known in the Philippines as the "tree of life" because every part of it has a use. Fronds are used as roofing, husks as floor cleaner or charcoal, white flesh can be eaten or processed into oil, the sap makes wine. Flowering four times a year for a harvest every three months throughout the decades-long life of the trees, coconuts have long allowed millions of people across the country to make a living.

But it's a rugged hardscrabble way of life. A harvest of 2,000 coconuts sells for 7,000 pesos ($160) and tenant farmers must share that with landowners. Many have sought to leave farming behind.

Call center and other jobs in the blossoming outsourcing industry offer air conditioned comfort and pay that is higher than average for white collar work in the Philippines. Those opportunities were multiplying in Leyte as more outsourcing companies moved in. Then Haiyan came,  leveling towns and dreams.

At a call and data center in Palo, 11 kilometers from Tacloban, chairs, desks and computers are soaked in water and caked with dirt.

The building wasn't hit by Haiyan's storm surge but monstrous winds peeled off iron-sheet roofing from the hangar-like structure as more than 500 people huddled within, leaving only the steel frame skeleton and soaking everything below. No one died on the premises of the company that had optimistically named itself Expert Global Solutions but some employees lost family.

Bosses visiting from Manila ordered harddrives of some 1,000 damaged computers destroyed to protect confidential data of clients mostly in the U.S.

Power may be restored to the area in December, a crucial milestone for businesses that hope to rebuild.

"It's impossible to resume operations now because all the computers are damaged, there's no equipment," said quality supervisor RJ Ripalda.

Some employees have decided to take jobs with the company in Manila but that's not option for some, including Ripalda with two young children.

"Others have the option to relocate, but others will have to find other means to earn to buy milk for their children, rice," she said.

At billing services company Accudata, five employees were seated around a table waiting for their cellphones to finish charging on a power outlet run from a generator. They had just gotten some rice and other supplies from the provincial relief operations center.

"It will take a year to repair our office," said Rosalie Alconaba, a supervisor. "I will just pray our office will be repaired soon."

About 200 out of 1,000 employees of Accudata and affiliate data processing company CoreData have put their names down for relocation to Manila, the Philippine capital.

Those with families are reluctant to leave even though they have no job options in Leyte.

"Even the department stores of Tacloban were looted, malls were ransacked, so there is really nothing," said one employee.

Edgardo Sablay also fears tough times. The 48-year-old has spent most of his life climbing tall coconut trees to collect sap from the palm's flowers for Tuba, or coconut sap wine, and can earn 700 pesos ($16) for collecting 8 gallons in a day.

"I have not gone to school, I only know how to make Tuba," he said. "I am not losing hope that there will still be trees that can survive and which I can climb to feed my family."