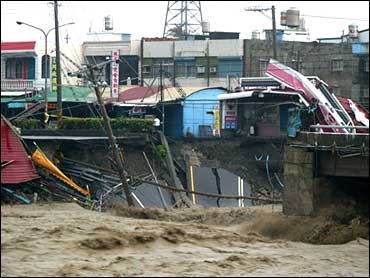 Haitang weakened after moving inland, a day after slamming into Taiwan where it killed four people, caused heavy flooding and damaged cities and farms. There were no immediate reports of casualties on China's mainland.

Chinese government forecasters predicted the typhoon would be soon be downgraded to a tropical storm, the official Xinhua News Agency said.

The typhoon hit the mainland at the coastal town of Huangqi in Fujian province at 5:10 p.m., with wind speeds at its center up to 74 mph, said a provincial weather bureau official who identified herself only as Miss Li.

More than 1 million people were evacuated from their homes in Fujian and Zhejiang province directly to the north, China Central Television reported.

One TV reporter said the harsh wind felt like sand pelting his face.

The airport was closed at Fujian's provincial capital, Fuzhou, and flights were diverted north to Shanghai - about 500 miles away - or south to Xiamen, the Xinhua agency said. Some highways were also blocked.

Storm winds were blamed for eight traffic accidents Monday on Fujian's main highway, where billboards were blown away, Xinhua said. It gave no casualty figures.

China had braced for Haitang for days, with soldiers stacking sandbags along embankments.

Even before the storm hit, the Sai river near Fujian's city of Fu'an had surged to 6 feet above the official flood level, according to the Fujian Water Management Bureau's Web site.

In Taiwan, falling rocks killed one man, two women drowned and a fourth victim was swept away by water while fishing, the Center for Disaster Response said. A fisherman was also reported missing.

Dozens of people on the island were injured, mostly by falling trees and signboards, as swollen rivers pounded bridges and knocked away roads.

Schools, government offices and financial markets were closed in Taiwan as torrential rains whipped through the capital Taipei, uprooting trees and dislodging billboards.

Taiwanese farms suffered damage estimated at $14.2 million, the Council of Agriculture said. No damage figures were immediately available for other industries.

Separately, rains unrelated to the typhoon killed at least 13 people and wrecked houses and damaged farms this week in China's mountainous southwest, the government said Tuesday.

Seven more people were missing after the rains swept through Sichuan province from Saturday to Tuesday, Xinhua said, citing officials.