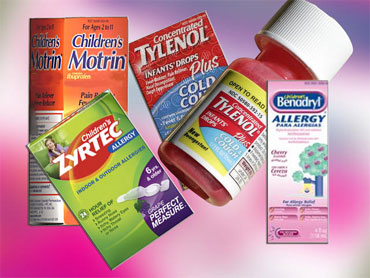 (CBS/AP) You might want to check your medicine cabinet for moldy-smelling drugs.

Johnson and Johnson, the makers of Children's Tylenol, Motrin, Rolaids and more, has expanded it's recall of 21 over-the-counter drugs after consumers have complained of a sickening, musty smell emanating from the products.

This would be the second recall in less than a month for the same problem, and Johnson and Johnson spokeswoman Bonnie Jacobs told CBSnews.com that 2.5 million bottles are affected by the recall.

The company reportedly says the smell is caused by small amounts of a fungicide called 2,4,6-tribromophenol used on wooden pallets. The odor is produced when fungi break down that chemical.

Although the health effects have been "temporary and non-serious," as McNeill, Johnson and Johnson's parent company said in a release, the smell is severe enough to have caused nausea, stomach pain, vomiting and diarrhea in some people.

This would be the second recall in less than a month for the same problem, and one of  three main factories has been temporarily shuttered.

The FDA is more than displeased with the way McNeil has handled things so far, according to an earlier report by CNN. Warning letters have been fired off to the company for not reacting quickly to complaints and its failure to take action.

"When something smells bad, literally and figuratively, you aggressively investigate and solve the problem," said Deborah Autor, director of FDA's compliance office to CNN.

For a complete list of recalled drugs, as well as information on how to get a refund, go to the McNeil website.

"The company should have acted faster," Autor said. "All companies have a responsibility to ensure high quality, safety and effectiveness of their products and protect consumers."