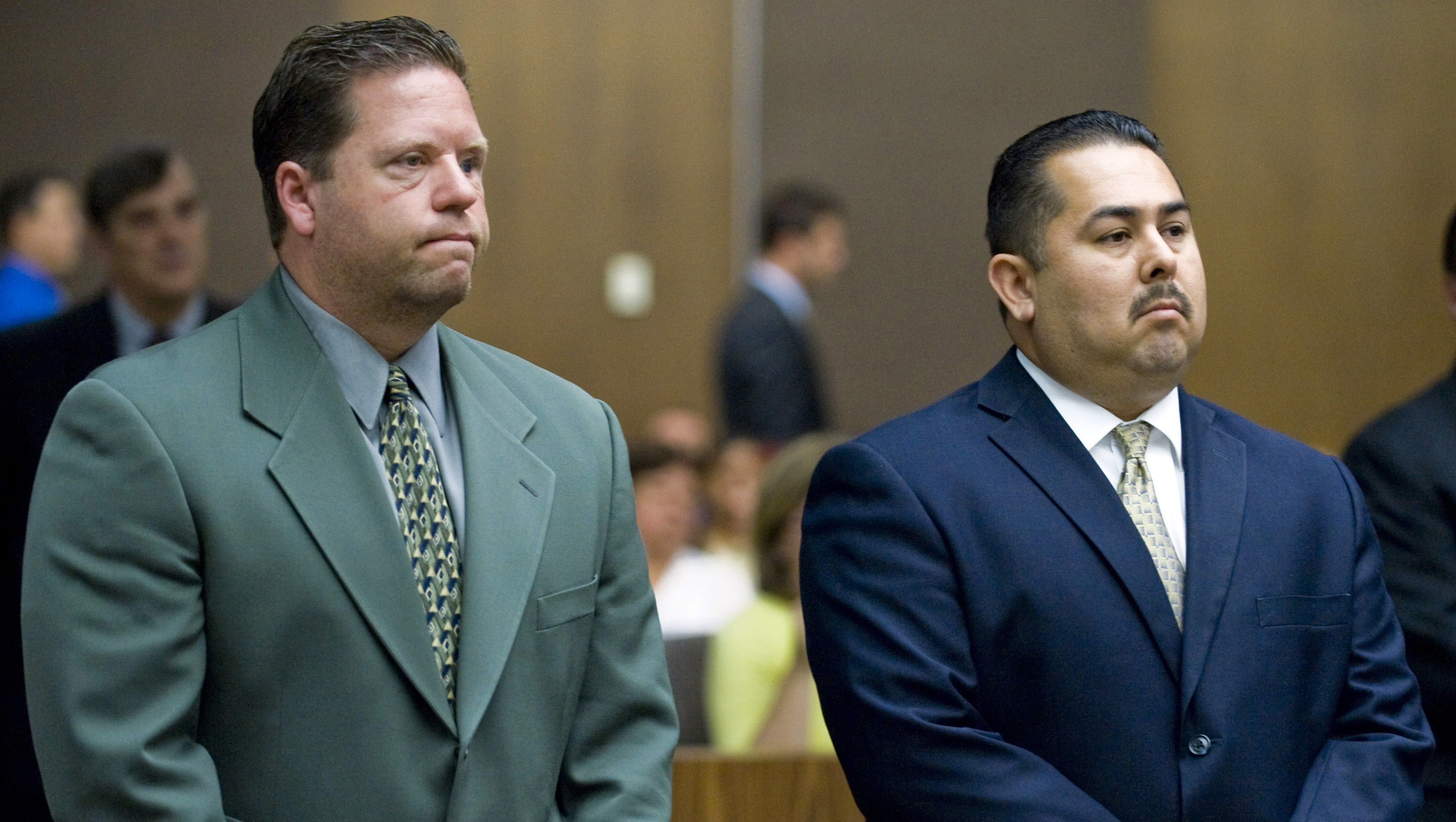 SANTA ANA, Calif. -- Two former California police officers were acquitted Monday in the death of a homeless man after a violent struggle with officers that was captured on surveillance video.

It was a rare case in which police officers were charged with a death involving actions on duty.

Jurors took less than two days to reach their verdicts.

The arrest was captured on a 33-minute surveillance video that was key evidence at the trial. It showed Kelly Thomas struggling with six police officers, who hit, kneed and jolted him with an electric stun gun as he was on the ground, calling out for his father over and over again.

The FBI said after the verdict that it will investigate to determine whether to take federal action against the officers. "With the conclusion of the state court trial, investigators will examine the evidence and testimony to determine whether further investigation is warranted at the federal level," said Laura Eimiller, the FBI's spokeswoman in Los Angeles.

Spectators let out a gasp as the verdict was read. Cicinelli, 41, wiped tears from his eyes, then put his face in his hands as the verdict concluded. Ramos, 39, put his head down and rubbed his temples before turning to his supporters and winking. Cicinelli's attorney pounded the defense table twice before embracing his client in a bear hug. Thomas' father sat stone-faced while his mother wept.

Outside court, Thomas's parents condemned the verdict.
"Just horrified," Cathy Thomas said. "He got away with murdering my son. It's just not fair. So I guess it's legal to go out and kill now. He was so innocent. It just isn't fair at all."

Ron Thomas said the defense "lied ... continuously" about his son's character, such as his drug use.

"It's carte blanche for police officers everywhere to beat us, kill us" because the verdict proves "they'll get away with it."

Thomas was taken off life support five days after the July 5, 2011, scuffle with several officers.

A third former officer, Joseph Wolfe, was awaiting trial but prosecutors said Monday they would drop the case against him. Three others were not charged.

Thomas' death led to days of protests in Fullerton, a Southern California college town, forced the recall of three City Council members and led the police chief to step down.

Dozens of Thomas supporters, who called themselves "Kelly's Army," packed the courtroom each day of the five-week trial wearing yellow ribbons and buttons bearing his image. Ron Thomas said his son suffered from schizophrenia and didn't understand the orders from police.

The surveillance video was played repeatedly by attorneys for both sides. It starts shortly after Ramos pulled up in his patrol car and continues well past the end of the struggle, capturing the officers' exchanges as Thomas lies unconscious in a pool of blood and paramedics work to revive him.

The incident began when Ramos responded to a routine call about a disheveled man jiggling the handles of car doors in a busy Fullerton transit center parking lot.

The officer suspected Thomas was in possession of stolen property after his partner found mail belonging to an attorney in a backpack Thomas was carrying.

Authorities later determined the letters had been tossed out by the attorney and plucked from the garbage by Thomas.

In the surveillance footage, Ramos appears to grow angry as Thomas repeatedly evades questions about his name and doesn't comply with orders to sit with his hands on his knees.

Prosecutors said the back-and-forth took a critical turn when Ramos put on Latex gloves, made two fists in Thomas' face and said, "Now see my fists? They're getting ready to (expletive) you up." Seconds later, Thomas stood and backed away and ran. Ramos and his partner swatted at him with their batons then overtook him and repeatedly called for backup as they struggled to cuff him.

Rackauckas told jurors that Ramos was charged with murder because his verbal threat set in motion the chain of events that led to Thomas' death and he did nothing to stop the violence as six officers joined the fight. Cicinelli, who arrived minutes later, used the butt end of his electric stun gun to hit Thomas eight times in the head and face, breaking multiple bones and causing breathing problems that contributed to his death, prosecutors said. He also stunned him several times.

Ramos' attorney, John Barnett, said jurors did their duty. "These peace officers were doing their jobs," he said. "They were operating as they were trained, and they had no malice in their hearts."

The coroner listed the cause of death as brain death caused by asphyxiation from the officers piling on his chest.

Defense attorneys, however, said that Thomas was to blame for the fight because he disobeyed a lawful order and then fled police who were making an arrest.

They told jurors that Thomas was not a helpless, homeless mentally ill man, but a violent and dangerous person who had a history of drug use and was homeless because he had attacked members of his own family. In one of the most striking moments at trial, the defense put Thomas' mother and maternal grandfather on the witness stand.

A tearful Cathy Thomas told the jury she had taken out a restraining order against her son three years ago after he choked her for several minutes during an argument. The grandfather testified that Thomas had suddenly attacked him with a fireplace poker in 1995. Thomas pleaded guilty to the attack and served nine months in jail.

Only a handful of police officers nationwide have been charged with murder for actions taken while on duty and convictions in those cases are even more rare, said Lawrence Rosenthal, a law professor at Chapman University School of Law and a former federal prosecutor.

"It's not unprecedented, but it's very rare," he said. "There's only a handful."

A jury eventually convicted him of involuntary manslaughter and he served a year in jail.

In New Orleans, a federal jury convicted a group of current or former police officers in deadly shootings on a bridge less than a week after Hurricane Katrina. They were convicted of civil rights violations in the shootings that killed two people, but the killings were found not to have been murders.