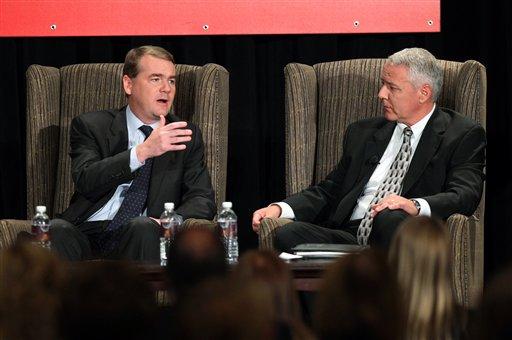 Two people riding in a hot air balloon were killed Wednesday night when it crashed for unknown reasons, police said.

Two balloons were flying in the area when one of them crashed, police said. The pilot of the second balloon told CBS affiliate KSLA-TV that from what he could see, the balloon that crashed was trying to land when it hit a power line.

"We got a report of a balloon on fire that hit some electrical lines," Shreveport Police spokeswoman Kacee Hargrave said. "The people either jumped out or fell out."

Johnny Brittain videotaped the accident and narrated it as it happened.

"It looks like there's somebody in there, don't it," he said on the tape.

"I wonder if they got parachutes to jump out. You think they would have jumped out," Johnny said.

Paramedics would later find two bodies on the ground below — an experienced pilot and his female passenger, reports Robb Hays of CBS affiliate KSLA-TV.

The debris field stretched for "quite some distance," Hargrave said.

There were "pieces of things on fire. So we knew it was big and then they had said - 'Oh my God! That was a person,'" said Stephanie Selitto, who watched the accident with her children.

"I heard two explosions less than a minute apart and I turned and looked and saw the hot air balloon on fire and then I saw a man fall out," Davis said.

Investigators from the National Transportation Safety Board will investigate the accident.