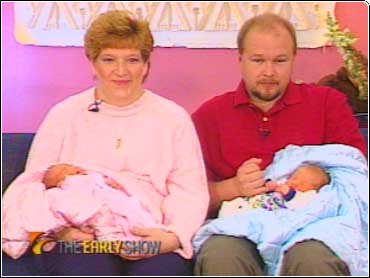 Around the world, several sets of twins were born on opposite sides of the midnight millennium - one baby born on December 31, 1999, and the other on January 1, 2000.

One of those lucky couples to have a set of twins born across the millennial divide was Julie and Tim Wallman of Indianapolis. Their son Jacob was delivered by Cesarean section moments before midnight on December 31. His little sister, Jordan, came into the world at 12:31 a.m. on the 1st.

"We got the best of both years," said Julie, cradling her newborns in her arms. "The first baby of the millennium and a tax deduction."

The Wallmans asked the doctor to schedule the first Cesarean section around midnight so that the second child would have to be delivered the next day.

"Everything came into place once we came in and the doctor said that Jordan would have to be delivered by Cesarean section," Tim told CBS Early Show Co-Anchor Jane Clayson. "So she said she would rather take both of them that way so it all worked out."

The Wallmans, though, had not really planned on having a millennium baby -- much less two.

"When we talked about having another child, we had kiddingly said, 'Oh, let's try for the millennium baby,'" said Julie. "And when I wasn't pregnant until May, we gave that up, and then in July we found out we were having twins and it was, well, four to six weeks early for twins. There's a possibility we could have the millennium babies because five weeks early is it. And there they are."

But Jacob and Jordan Wallman were not the only set of millennium twins. In Enid, Okla., Bass Baptist Medical Center recorded Jacob Beebe's birth in the final instant of 1999, his brother Joshua's a minute later.

In Seattle, a boy, Santos, was born at 10:06 p.m. Friday and his brother, Orlando, followed at 12:16 a.m. Saturday, said a University of Washington Medical Center spokesman. The hospital identified the parents as Maria Cruz Mora-Rivas and Emiliano Villafuerte, both of Wenatchee.

In Dallas, Tanisha Thornton snuck ahead of her sister and arrived at 11:48 p.m. New Year's Eve. Tasia Thornton waited a few more minutes and was born in the first minute of 2000 at Arlington Memorial Hospital.

Another set of Texas twins straddled the new millennium at Saint David's Medical Center in Austin.

In Berlin, Germany, a 25-year-old Bulgarian mother first gave birth to Mircem, four minutes before the end of 1999, doctors at St. Joseph's Hospital said. A minute into New Year's Day, his brother Mircan followed. The hospital declined to identify the mother, but indicated all three were in good health.