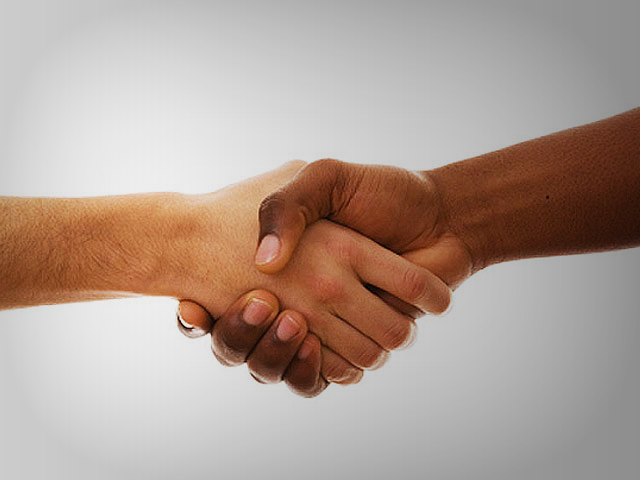 To be really successful (at sales or any other career), you must not just learn to cope with occasional (and even frequent) rejections. You must also learn to turn rejection into a goad that drives you towards ultimate success. This post provides five simple steps to accomplish this.

Differentiate between invalid and valid rejection

Here's an example of an invalid rejection.

Suppose you make a cold call and a prospect hangs up on you. While that's a textbook definition of "rejection", the truth is that the prospect's reaction has nothing to do with you.

There's no way of knowing. It's not a valid rejection. It's just luck.

What's important here is that the prospect's reaction really didn't have anything to do you with personally, because anybody else taking the same action at the same time would have gotten the exact same result. You simply you took an action that didn't work.

Here's another example. Suppose a guy is "selling" a woman on the idea that she should go out on a date with him. Talk about the potential for "rejection"!!! Millions of guys live in terror of this situation. Even so, much of the time the anticipated "rejection" is just an illusion.

I was once rather "smitten with" an attractive woman in my martial arts class. However, despite several attempts on my part, she simply would not go out with me. In fact, she seemed offended I had even asked. A classic case of "rejection," right? I should have been crushed, right?

Not so fast! Since we hung with the same crowd, I began noticing the kind of guys she dated. They were all about 56, dark-eyed, with long dark hair, and played in rock bands. I'm 61, blue-eyed, with short blond hair, and write about business. Under her "rules" for what she found attractive in a potential mate, I wasn't even in the ballpark.

So where's the rejection? She had her rules; I didn't fit those rules. That's an invalid rejection because there's nothing I can do to change who I am.

Now, suppose she actually had been the type who wanted to date guys similar to me. And suppose I had asked her out, but due to my awkward approach, she decided to "reject" the idea. That would mean is that my sales approach didn't match her rules, even though the product met her needs. That's a valid rejection, because my approach is something that's within my control.

As soon as you realize that invalid rejections are just luck, most of so-called rejections simply become neutral events and the entire concept starts to lose its sting. With that in mind, here's the next step...

Understand why you feel rejected.

Why do you work? Money? Recognition? Achievement? Wrong, wrong, and wrong. All of those reasons are just outward manifestations of your real goal: you want to feel good about yourself.

For example, you think that you work because you want money? Wrong. What you really want is what the money can buy, and I'm not talking about that new Ferrari. I'm talking about the feeling that owning a Ferrari would give you.

No matter what reason you give for being in sales, trace it back, and you'll eventually get to "it makes me feel good about myself."

Therefore, rejection "hurts" because there's something about the situation that makes you feel bad about yourself. To test this theory, imagine the biggest idiot you've ever known telling you that you're stupid. Do you care? No. The "rejection" fails to sting because it doesn't assault your sense of self. Who cares what that oaf thinks?

Rejection starts to sting as the result of three qualitative and highly subjective factors:

Frequency. Everyone can deal with some rejection, but how much rejection can you experience before you start taking the negative feedback to heart? How many times can you contact a qualified prospect and get a negative response before you begin to take it personally? In other words, getting told a million times that you're stupid might make you question your intelligence, even if you didn't particularly respect the people saying it.

Emotional Involvement. How emotionally involved can you become with somebody before you feel that the other person might know you so well that criticism hurts? For example, you might be reluctant to close because you're afraid that your customer might feel "buyer's remorse" and stop liking you -- a form of rejection. In other words, if you like somebody, you'll tend to feel pretty bad if that person tells you to go take a hike.

Perceived Importance. As a sales rep, you're likely to feel most comfortable contacting people who are of a similar (or lower) social class or educational background. However, you might find yourself avoiding people whom you feel are more important than yourself, because their rejection of you might seem to carry more weight or authority.

Understanding why you feel rejected is the first step to removing the "sting." To do this, you take a different approach, depending on subjective reason that's behind your feeling of being rejected.

Remove the Sting of Rejection

Now that you know why you feel rejected, your job is to weaken the ability of the "rejection" situation to make you feel bad about it.

Frequency. To make yourself feel less vulnerable in this area, you must first throw out all the invalid objections (as defined in the first step of this post). Don't even count them. They're nonsense. If you still feel that you're getting a lot of rejections, then look at the norms for other professionals at your level. If you discover that you're in the ballpark for everyone else, there's no particular reason to feel bad about being rejected. If it turns out that you are getting valid rejections more frequently than your peers, then you'll need to figure out what sales skill is missing or broken in your tool kit, and then work on it. We'll get to that in the last step of this post.

Emotional involvement. The cure for this subjective ailment is to value both what you're offering AND the relationship. If you truly value both, then there is absolutely NO reason why you shouldn't want your customers to be your true friends. If it turns out a your friend doesn't want or need your offering, it's not a rejection of you, but of the need for your offering. Because it's not about you, stop worrying about it. If it's just a matter that your friend doesn't want or need what you've got to offer, then you can go ahead and be happy for that friend didn't buy. That's what your friend wanted and your offering is still good. And you're doing what's right by your friend.

Perceived importance. The cure for this is simply to believe in yourself. Here's the honest truth: if you're offering something that's crucial to the success or happiness of your customer, you are as important as the biggest bigwig on the planet. Here's another big truth: most bigwigs are exceedingly average people who've stumbled into their success. They're not Gods Among Men Whose Judgment Must Be Valid. They're everyday dudes and dudettes, just like you and me. So get some perspective. The opinion of some muckety-muck is just not all that big a deal.

The trick to bulletproofing yourself against rejection is to let people have their own emotions and beliefs, and then simply use whatever happens as either a signal to improve your skills (a valid objection) or a signal to exercise your "so what" mental muscle (an invalid one).

Reframe rejection into your path to success

In sales, the number of rejections you get is directly proportional to how successful you'll become. It's true. The people who hit the most home runs are the one who get up to bat the most. As has been pointed out innumerable times, the person with the major league baseball record for being struck out is Reggie Jackson, one of the greatest batters of all time.

At the danger of going from the sublime to the trivial, here's a story from my own experience. When I first started writing freelance, I needed to sell a book to launch my career. I sent it to numerous editors and agents and got plenty of "rejection letters." Rather than feeling discouraged, I started each day by laying out the letters on the floor of my kitchen and walking on them like they were stepping stones.

I'd say to myself: "This is what's going to make me successful, because the more rejections I get, the better deal I'll get when it happens." And, sure enough, when I did sell the book, it was too Random House, and it not only launched my career but did much better in the marketplace than I ever dreamed.

Here's how to do that same kind of thing with selling.

Estimate the number of times you encounter rejection in an average day. (No need to be entirely accurate; go ballpark here.) Now calculate your daily average salary/commission. Now divide the number of rejections per day by your daily salary. Example:

Look at that number carefully. That's how much money goes into your pocket every time you encounter a rejection. The reasoning is simple. If you're not getting rejected, you're not selling. So when you do sell, it's because you've been willing to be rejected. The rejections lead to the sales, so you're being paid to be rejection.

Now take a post-it note and write down the following equation: "REJECTION = MONEY" in big, bold letters with a sharpie! Make two more post-its the same way. Stick one post-it by your phone. Put one where you see it every time you open your briefcase. Put the third in your bathroom where you'll see it when you get ready for work in the morning.

Yeah, I know that sounds kinda corny, but the technique works because it forces the equation into your subconscious mind. Leave the post-its up until they crinkle up and fall off. Then make new ones. Just do it. Trust me.

Build a plan to hone your sales skills

Congratulations! As you've worked through this post, you've identified and eliminated the rejections that are meaningless, you've figured out why you feel rejected, taken steps to remove the sting of rejection, and turned rejection from a negative into a positive.

Now we take everything to the next level. It's time to build a plan to increase your sales skills.

This is the only way to reduce the number of VALID rejections that you encounter. CBS MoneyWatch's Sales Machine has plenty of posts that can help you with virtually every aspect of your sales strategy technique and process.

There are plenty of sales training course and sales books you could read, but for now, here is a list of posts that can help you build your own customized sales skill improvement plan:

This post, which originally appeared on BNET.com, is based on a discussion with bestselling author Art Mortell. Illustrations are provided by Cory Thoman.