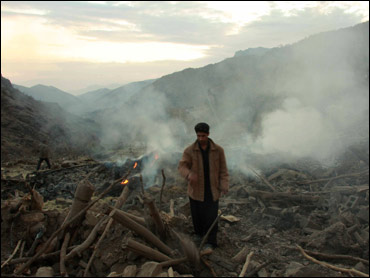 Turkey sent hundreds of troops about 1½ miles into northern Iraq early Tuesday in an operation against Kurdish rebels but then withdrew them later in the day, Turkish and Kurdish officials said.

The raid came two days after Turkey carried out airstrikes against rebel positions in the Iraqi Kurdish region of northern Iraq, and Turkey claimed it inflicted a "heavy blow" to the rebels.

The incursion of about 300 troops - the first confirmed Turkish ground operation inside Iraq since the U.S. invasion of Iraq - did not represent a large-scale push that some feared could destabilize a relatively calm part of Iraq. In November, the Turkish military reportedly has massed 100,000 troops along the border.

Jamal Abdullah, a spokesman for the regional Kurdistan government, told The Associated Press that the Turkish troops withdrew about 15 hours after entering Iraq about 3 a.m.

Jabar Yawar, a spokesman for Kurdistan's Peshmerga security forces in Irbil, Iraq, told the AP that "today's Turkish military operation was a limited one, and the troops withdrew from Iraqi territory."

Late Tuesday, Turkey's military said it had inflicted heavy losses on a separatist Kurdish rebel group in airstrikes over the weekend and in a "small-scale" incursion by ground forces.

In a statement posted on its Web site, the military said ground forces based close to the border with Iraq, crossed "a few kilometers" into northern Iraq after spotting a group of rebels trying to infiltrate into Turkey. "A heavy blow was dealt to the group," it said.

The Iraqi government had called the incursion an unacceptable action that would lead to "complicated problems."

The incursion came two days after Turkey carried out airstrikes against rebel positions in northern Iraqi on Sunday.

U.S. military commanders in Iraq didn't know Turkey was sending warplanes to bomb in northern Iraq until the planes had already crossed the border, the AP has learned.

Americans have been providing Turkey with intelligence to go after Kurdish rebels in northern Iraq. And a "coordination center" has been set up in Ankara so Turks, Iraqis and Americans can share information, two officials said Tuesday.

But commanders and diplomats in Baghdad were angered when they were told of Sunday's attack after it was already under way, defense and diplomatic officials said in Washington and Baghdad.

They spoke on condition of anonymity because they were not authorized to speak on the record.

In Tuesday's ground raid, Yawar said the Turkish forces crossed into an area near the border with Iran, about 75 miles north of the city of Irbil. Abdullah described the region as a deserted mountainous frontier area.

The Kurdish Workers' Party, or PKK, has battled for autonomy for southeastern Turkey for more than two decades and uses strongholds in northern Iraq for cross-border strikes.

Secretary of State Condoleezza Rice, on a visit to Baghdad, said the U.S., Iraq and Turkey have a "common interest" in stopping Kurdish rebels in northern Iraq, but she cautioned against action that could destabilize the region.

"This is a circumstance in which the U.S. has constantly counseled that we need an overall comprehensive approach to this problem and that no one should do anything that threatens to destabilize the north," she said.

Washington is trying to balance support for two key allies: the Turkish government and the Iraqi Kurds. The U.S. remains opposed to any major Turkish military operation into northern Iraq - which could disrupt one of the calmest areas of Iraq.

Perino added that the PKK militants are a threat to Turkey, Iran and the U.S. and said the U.S. is sharing information with Iraq and Turkey, reports CBS News correspondent Peter Maer.

About 1,200 Turkish military monitors have operated in northern Iraq since 1996 with permission from local authorities. A tank battalion has been stationed at a former airport at the border town of Bamerni and a few other military outposts were scattered in the region. Ankara rotates the troops there.

Iraqi government spokesman Ali al-Dabbagh said the incursion "is not acceptable and will lead to complicated problems."

"Iraq understands the threat the PKK represents, one that endangers Turkish security. But Iraq rejects any Turkish interference in Iraq," he said, adding that the Iraqi government was given no warning about the incursion.

Asked about a reported clash between the Turkish troops and Kurdish rebels inside Iraq, Turkish President Abdullah Gul said: "From now on, whatever is necessary in the struggle against terrorism, it is being done."

Turkish Prime Minister Recep Tayyip Erdogan had said his country had no intention of violating Iraq's territorial integrity or harming civilians, "but the PKK terrorist organization's camps there are terrorist camps, they are our enemy."

"They threaten our national unity and we are using our rights stemming from international laws to defend ourselves against this threat," Erdogan said.

Abdullah, the spokesman for the regional Kurdish government, was critical of the operation.

"We are against any Turkish incursion inside Iraqi territory. This is regarded as a violation of Iraq's sovereignty," he said. "We don't expect that problems between Turkey and the PKK rebels will be solved by a military operation."

In Sunday's airstrikes, as many as 50 fighter jets were involved in the attack, the biggest against the PKK in years. An Iraqi official said the planes attacked several villages, killing one woman. The rebels said two civilians and five rebels died.

Iraq's parliament on Monday condemned the airstrike, calling it an "outrageous" violation of Iraq's sovereignty. Turkey said Sunday's attack used U.S. intelligence and was carried out with tacit American approval.

The incursion began hours before Rice arrived in Kirkuk, a city that Iraq's Kurds call their Jerusalem in the oil-rich territory claimed by many. She met members of a civilian-military reconstruction unit and provincial politicians before flying to Baghdad.

Sunni Arabs ended a yearlong political boycott earlier this month in Kirkuk - the hub of Iraq's northern oil fields - under a deal that sets aside government posts for Arabs. It was the biggest step yet toward unity before a referendum on the area's future.

Kirkuk is an especially coveted city for both the Shiite-dominated Iraqi government in Baghdad and the Kurdish one in Irbil. Kurds want to incorporate it into their self-rule area, but the idea has met stiff resistance from Arabs and a constitutionally required referendum on the issue was delayed to next year.