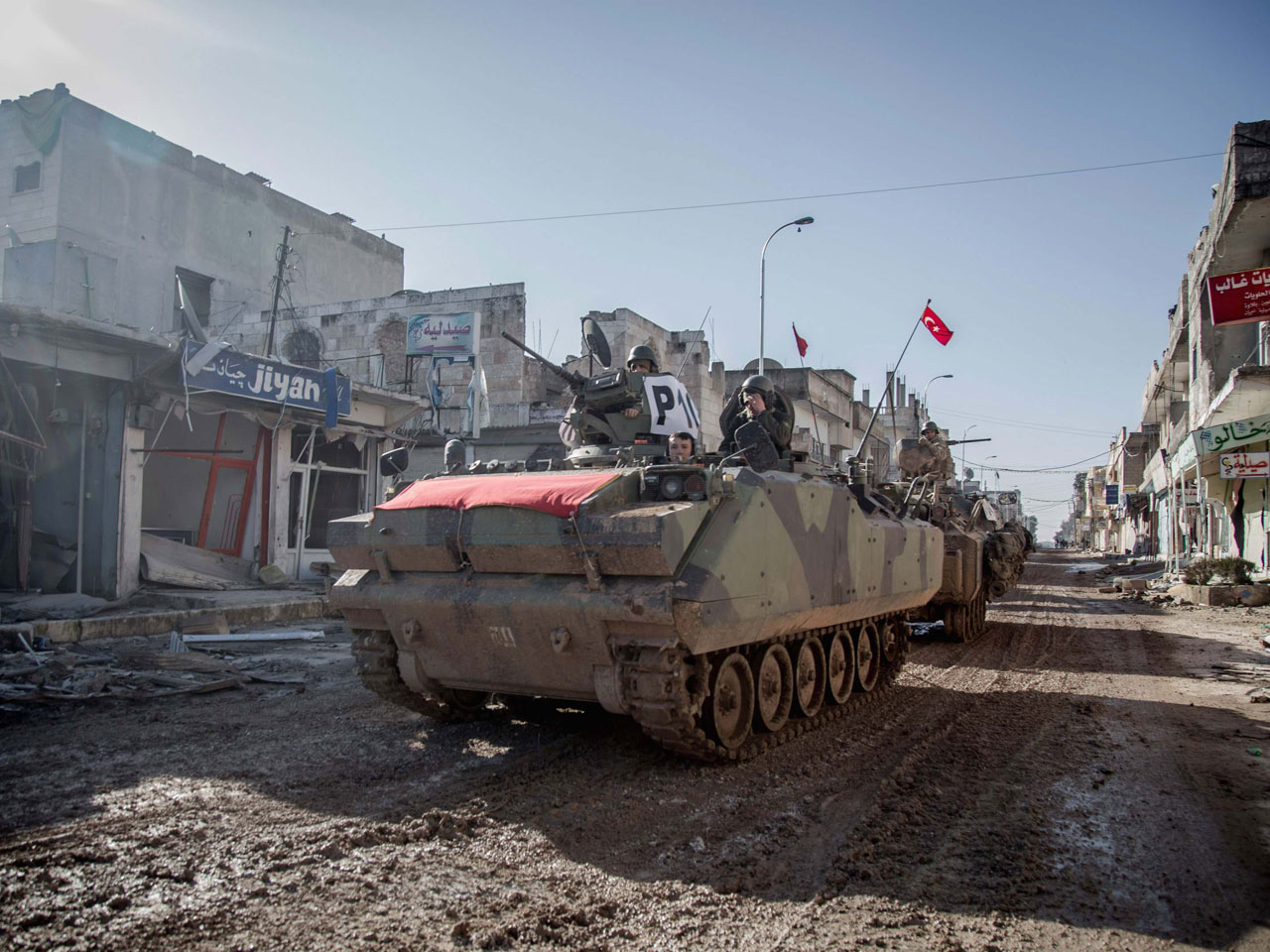 In a one-line report on the incident, Syria's state news agency denounced what it called a "blatant aggression" by Turkey.

The mission, saving Turkish soldiers reportedly stuck for months at the tomb of the grandfather of the founder of the Ottoman Empire, saw hundreds of troops backed by tanks cross the border near the border town of Kobani once besieged by the Islamic State of Iraq and Syria (ISIS). The tomb is considered sovereign territory by Turkey, and they consider their claim to it protected by a 1921 treaty.

Turkey was widely criticized for not intervening for months in the Kobani battle, which finally saw Kurdish fighters backed by U.S.-led airstrikes push out the extremists.

"We had given the Turkish armed forces a directive to protect our spiritual values and the safety of our armed forces personnel," Prime Minister Ahmet Davutoglu said in televised remarks.

Davutoglu had repeatedly said that Turkey would retaliate against any attack on the tomb, which was located 23 miles from the Syrian border before being moved overnight, Reuters reports.

"Countries which do not look after their historic symbols cannot build their future," he said on Sunday.

One group traveled to the tomb, some 22 miles from Turkey on the banks of the Euphrates River in Syria's embattled Aleppo province, Davutoglu said. Another group seized an area only yards from the Turkish border in Syria's Ashma region, according to a statement from President Recep Tayyip Erdogan's office.

One soldier was killed in an "accident" during the operation, Turkey's military said, without elaborating.

"Before the Turkish flag was lowered at (the tomb), the Turkish flag started to be waved at another location in Syria," Davutoglu said. He said troops destroyed the complex once housing the tomb.

The U.S.-led coalition forces were informed of the Turkish operation after its launch to prevent any casualties, Davutoglu said. U.S. officials offered no immediate comment.

There had been rumors for months that the soldiers stationed at the tomb had been besieged by militants from ISIS, which hold a third of Syria and neighboring Iraq in their self-declared caliphate. Some 40 Turkish soldiers once guarded the tomb, making them a target for ISIS and other militants in Syria's long-running civil war, though the overnight operation apparently saw no fighting.

Normally, the detachment is rotated every six months but the last one was trapped there for eight months, Reuters reports.

The tomb belonged to Suleyman Shah, the grandfather of Osman I, founder of the Ottoman Empire. The site along the Euphrates River is revered by Turkey, a strongly nationalist country whose rights there stem from a 1921 treaty with France, then the colonial power in Syria. The Ottoman Empire collapsed in the early 20th century after World War I.

In the 1970s, Turkey moved the mausoleum to its last location because the old site at a castle further south in Syria was to be inundated by the waters of a new dam.

Shah, a Turkic leader, is believed to have drowned in the Euphrates in the 13th century. His followers headed north into what is today Turkey, where they launched the Ottoman Empire. Some historians question official accounts about the Shah's tomb, saying they might have been retrospectively concocted to enrich an imperial identity for Turks.

Turkey has wanted Syrian President Bashar Assad overthrown and has backed some rebels fighting against him. Earlier this week, Turkey signed an agreement with the U.S. to train and arm Syrian rebels fighting ISIS.

With its 750-mile border with Syria, Turkey could be a major player in the fight against ISIS. But negotiations with the U.S. over what to do about the Islamic militants have been fraught with disagreement - with Turkey insisting that the coalition needs to also target the Assad government.

Turkey also has had concerns over some of the Kurdish fighters battling ISIS in Kobani. It views the Kurds fighting in Syria as an extension of the Kurdistan Worker's Party, which has waged a 30-year insurgency against the Turkish government and is designated as a terrorist group by the U.S. and NATO.