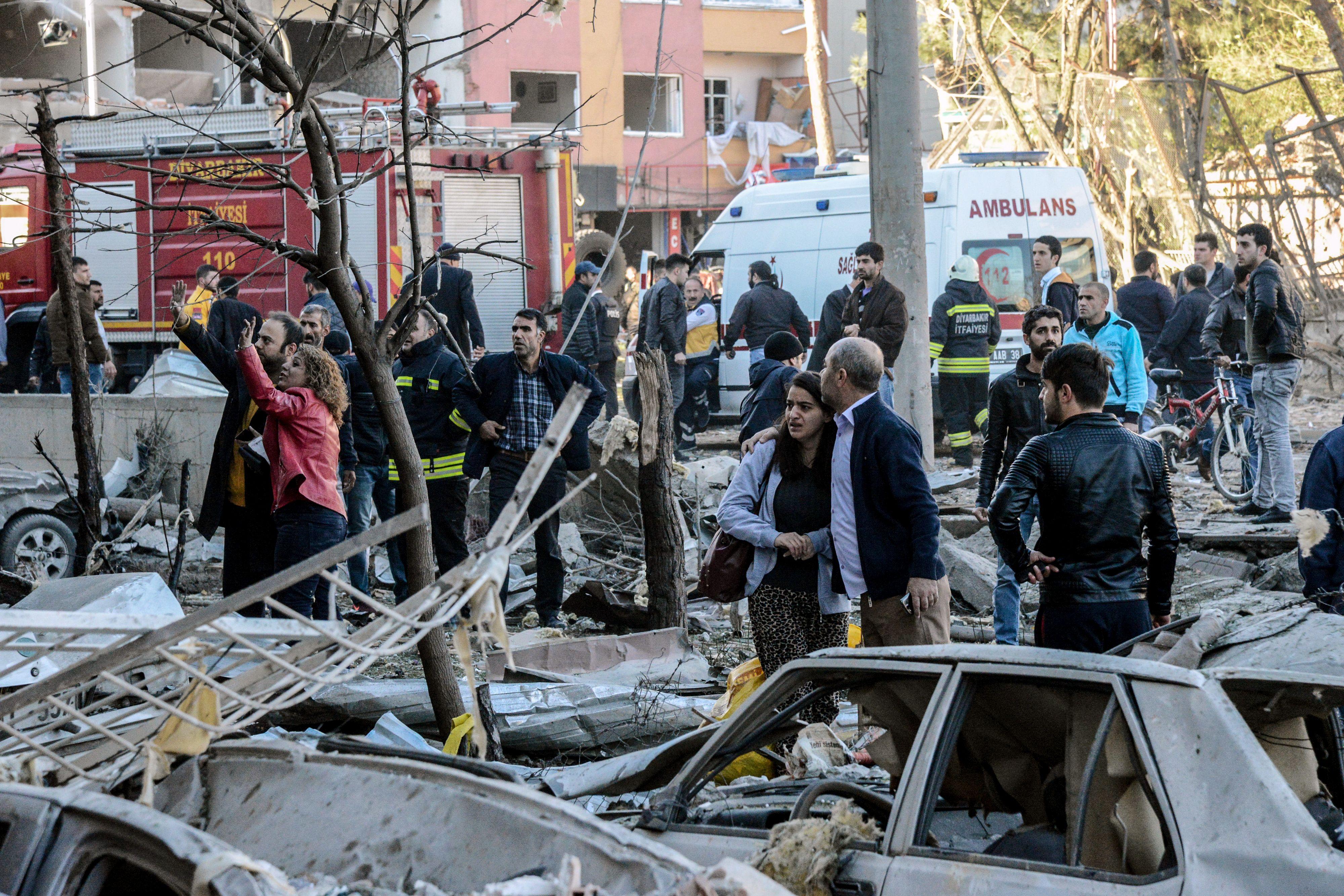 Prime Minister Binali Yildirim said eight people were killed and more than 100 wounded in the blast. He said one suspected member of the outlawed Kurdistan Workers’ Party, or PKK, was also killed in the explosion.

The Diyarbakir governor’s office had said earlier that the PKK claimed responsibility for the attack.

The blast occurred in Diyarbakir’s Baglar district, near a building used by the riot police. Turkey’s Anadolu news agency said the attack was carried out with a minibus laden with a ton of explosives.

The blast caused a large crater near the police building and damaged several buildings and businesses nearby. Television footage showed people walking among glass and other debris near buildings with windows blown out.

Turkey has been plagued by a series of deadly bomb attacks in the past 18 months, carried out by Kurdish militants or Islamic State of Iraq and Syria (ISIS) extremists.

The PKK has waged a three-decade-long insurgency against the Turkish state and is considered a terror organization by Turkey and its allies. A fragile cease-fire collapsed in 2015 and at least 700 state security personnel and thousands of Kurdish militants have been killed since then, according to Anadolu.

The detentions occurred in the middle of the night, with co-chair Demirtas describing on Twitter how he was taken into custody: “Police officials are at the door to my house in Diyarbakir with a detention warrant.” State-run Anadolu Agency reported co-chair Yuksekdag was detained in her home in Ankara. Other senior officials taken away included Sirri Sureyya Onder and Idris Baluken. A twelfth legislator was also detained during the day.

The TurkeyBlocks monitoring network confirmed the restricted access, saying its probes have identified “throttling at the ISP level as the source of the slowdowns, with the majority of internet users affected at the time of measurement.”

Rights activists say restricting access to the internet is aimed at preventing calls for demonstrations.

Prime Minister Yildirim said: “Occasionally one might have to resort to such precautions for the sake of security -- as a precaution. Once the danger is gone, everything will return to normal.”

CBS News staff in Turkey confirmed they had limited to no access to digital communications platforms on Friday.

An Interior Ministry statement said a total of 15 detention warrants were issued by the chief public prosecutors in Diyarbakir and the provinces of Sirnak, Hakkari, Van and Bingol. Two of the legislators were determined to be abroad, and authorities are still searching for one.

Anadolu reported the lawmakers were detained for not appearing in court to testify in ongoing terrorism-related investigations.

The government accuses the HDP of being the political arm of the PKK, an accusation the party rejects.

President Recep Tayyip Erdogan and other senior government officials have repeatedly called for the prosecution of pro-Kurdish lawmakers on terrorism-related charges, which was made possible after legal immunities protecting legislators from prosecution were lifted in May.

Hundreds of charges were filed against HDP lawmakers following the lifting of immunity, including “disseminating terrorist propaganda” and “membership in an armed terrorist organization.”

Demirtas reportedly reacted to the lifting of immunity by saying none of his fellow party members would voluntarily appear in court to testify. “If they want our testimony they’ll have to force us there,” he said, according to Anadolu.

Justice Minister Bozdag defended the detentions in a speech Friday, “The legislators that were detained did not help the legal process to proceed, they did not recognize the law. They did not respect the law.”

Earlier this week Gultan Kisanak, the HDP mayor of the largest predominantly Kurdish city of Diyarbakir, along with co-mayor Firat Anli, was arrested over alleged membership in the PKK.

In September, the government similarly ousted 28 mayors and other administrators, mostly from the HDP, and appointed trustees in their place.