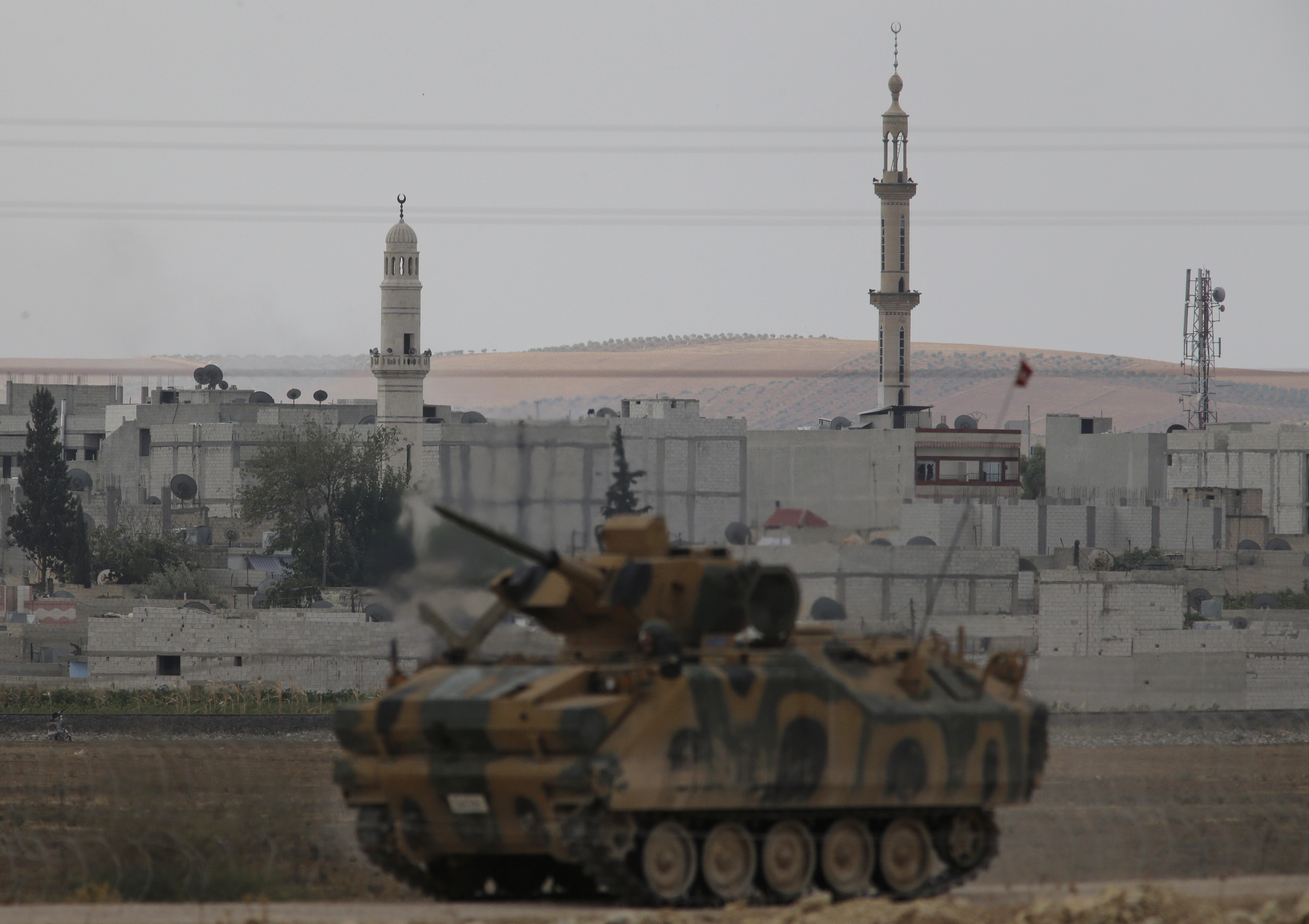 Updated Monday, Oct. 13: Turkey says no deal with U.S. regarding use of its bases has been reached.

AREQUIPA, Peru - Turkey will let U.S. and coalition forces use its bases, including a key installation within 100 miles of the Syrian border, for operations against Islamic State of Iraq and Syria militants, American defense officials said Sunday.

But progress in negotiations with Turkey - including Ankara's agreement to train several thousand Syrian moderate rebels - may not be enough to stop the massacre of civilians in Syria's border town of Kobani, where intense fighting continues.

The Obama administration had been pressing Ankara to play a larger role against the extremists, who have taken control of large swaths of Syria and Iraq, including territory on Turkey's border, and sent refugees fleeing into Turkey.

U.S. officials confirmed Saturday that Ankara had agreed to train Syrian moderate forces on Turkish soil. A Turkish government official said Sunday that Turkey put the number at 4,000 opposition fighters and said they would be screened by Turkish intelligence.

Also Sunday, officials confirmed that Turkey agreed to let U.S. and coalition fighter aircraft launch operations against ISIS militants in Iraq and Syria from Turkish bases, including Incirlik Air Base in the south. U.S. Defense Secretary Chuck Hagel, who has been traveling in South America, has said the U.S. wanted access to the Turkish bases.

The officials spoke on condition of anonymity because they were not authorized to discuss private talks between the Americans and Turks.

As fighting continued in the Kurdish town of Kobani, Secretary of State John Kerry acknowledged the tenuous situation. Speaking in Cairo, Kerry said the defense of Kobani does not define the international counterterrorism strategy.

Islamic State militants have taken parts of Kobani, Kerry indicated, but not all of it. The United Nations has warned of mass casualties if the border town falls.

"There will be ups and there will be downs over the next days as there are in any kind of conflict," Kerry said at the conclusion of an international aid conference for the Gaza Strip.

Elaborating on a theme the Obama administration has zeroed in on in recent days, Kerry said the U.S. has been realistic about how quickly it will prevail against ISIS. Officials have spoken of years of counterterrorism efforts ahead.

U.S. and coalition aircraft have been bombarding the territory in and around Kobani for days, launching airstrikes on dozens of locations and taking out militants, weapons and other targets.

The enclave has been the scene of heavy fighting since late last month, with heavily armed ISIS fighters determined to deal a symbolic blow to the coalition air campaign.

U.S. Central Command said warplanes from the United States, Saudi Arabia and the United Arab Emirates launched airstrikes on four locations in Syria on Saturday and Sunday, including three in Kobani that destroyed an ISIS fighting position and staging area.

Beyond the training and bases, there are other issues the U.S. hopes Turkey will agree to. U.S. officials have not said what all of those would be because discussions are continuing.

Earlier Sunday, President Barack Obama's national security adviser, Susan Rice, made clear the U.S. has not asked "the Turks to send ground forces of their own into Syria."

American officials are "continuing to talk to the Turks about other ways that they can play an important role. They are already essential to trying to prevent the flow of foreign fighters" and prevent extremists from exporting oil through Turkey. "So Turkey has many ways it can contribute," Rice told NBC's "Meet the Press."

Hagel spoke by telephone Sunday with Turkey's defense minister, Ismet Yilmaz, and thanked him for his country's willingness to assist in the fight.

Rear Adm. John Kirby, the Pentagon press secretary, said Hagel "noted Turkey's expertise in this area and the responsible manner in which Turkey is handling the other challenges this struggle has placed upon the country, in terms of refugees and border security."

Turkey and other American allies are pressing the U.S. to create a no-fly zone inside Syrian territory, and seeking creation of a secure buffer on the Syrian side of the border with Turkey. A "safe zone" would require Americans and their partners to protect ground territory and patrol the sky.

Hagel has said American leaders are open to discussing a safe zone, but creating one isn't "actively being considered."

Alongside Egyptian Foreign Minister Sameh Shoukry, Kerry said at a news conference in Cairo that Kobani is "one community and it is a tragedy what is happening there."

The primary focus of the fight against the ISIS group has been in Iraq, where the U.S. is working to help shore up Iraqi Security Forces, who were overrun in many places by the militants. In Syria, the U.S. is starting by going after the extremists' infrastructure and sources of revenue.

In the meantime, Kerry said, ISIS "has the opportunity to take advantage of that particular buildup, as they are doing. But I'd rather have our hand than theirs."

Gen. Martin Dempsey, the chairman of the Joint Chiefs of Staff, has estimated it would require hundreds of U.S. aircraft and cost as much as $1 billion a month to maintain an area in Syria safe from attacks by ISIS and Syria's air force, with no assurance of a change in battlefield momentum toward ending the Syrian civil war.

"Do I anticipate that there could be circumstances in the future where that would be part of the campaign? Yeah," Dempsey told ABC's "This Week."