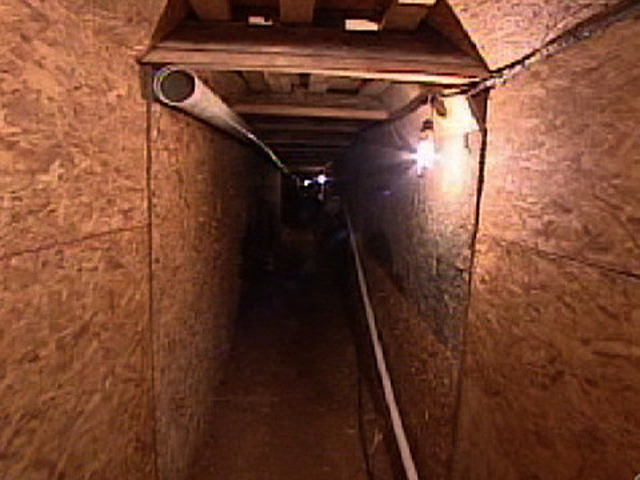 As violence along the United States-Mexico border continues to escalate, the U.S. government is beefing up border security. On Monday, Homeland Security Secretary Janet Napolitano touted the success of those efforts.

In fiscal years 2009 and 2010, criminal arrests along the border -- three-quarters of which were for drug or human smuggling -- were up 12 percent compared to the two previous years. Meanwhile, apprehensions for illegal border crossings are falling, suggesting fewer people are attempting to enter the U.S. illegally.

But CBS News has learned that border authorities are facing a troubling - and growing - problem. As border fences get stronger, smugglers are attempting to dodge increased security by tunneling and sailing their way into the U.S.

Since 2001, 111 tunnels have been discovered along the southern border, with tunneling activity increasing 65 percent in the past two years.

One tunnel, discovered 30 feet below the surface in Tijuana, is an elaborate passageway complete with electricity and ventilation, upwards of six feet tall, and wide enough for two people to walk side-by-side.

Uncovering the tunnels is a challenge, according to Tim Durst of U.S. Customs and Border Protection. Durst said the effort to find and shut down border tunnels is "baby steps at this point."

"It's basically the cartel and smuggling organizations' mechanism to go around the increased presence along the port of entries," Durst said.

Durst heads a Tunnel Task Force, and he and his team have been busy trying to find tunnels before smugglers can reach the U.S.

And if it's tough to find smugglers underground, it can be an even bigger challenge on the open water, along the U.S.-Mexico coastline, where there are no border checkpoints, no border crossings.

This year a multi-agency team has already made 786 smuggling arrests, up from just 400 last year.

A new wave of challenges - that fences can't contain.

To watch Brandon Scott's report click on the video player below.