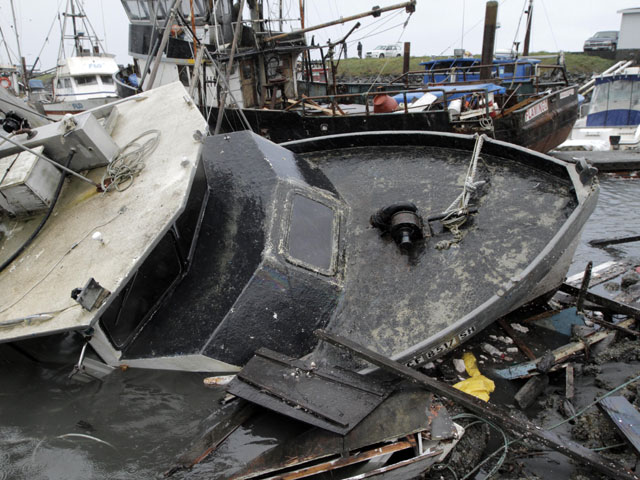 Lost homes caused tsunami damage estimates to jump into the tens of millions of dollars in Hawaii and California.

The most serious damages were near Kealakekua Bay and Kailua-Kona on the Big Island. Haleiwa and Keehi Lagoon on Oahu, as well as areas of Maui and Molokai, also lost significant value.

At least 25 boats sank at Keehi Lagoon, and an undetermined number of homes may have been destroyed along the Big Island's west coast beyond the two previously reported, including one that floated out to sea.

No one was killed or injured during the tsunami, which arrived in Hawaii early Friday morning as a result of a magnitude 9.0 earthquake in Japan.

"It's in the millions in terms of property, but it's very small in terms of personal injury and deaths. Of course, we're very, very fortunate," said Gov. Neil Abercrombie, who planned to visit areas damaged by the tsunami on Tuesday.

Additional losses may pile up because thousands of Japanese tourists have already canceled vacations to Hawaii since the tsunami, dealing a crushing blow to the state's tourism-dependent economy.

He said he would call the state Council on Revenues back into session to revise last week's forecast, which already put the state government's projected shortfall at nearly $1 billion over the next two years.

Hawaii residents and businesses have sustained enough financial harm that the state should qualify for federal assistance, including low-interest recovery loans through the Small Business Administration and other associations, he said.

It will take months to clear debris from piers and the ocean floor, and much longer to repair damaged shorelines, said Ed Underwood, Division of Boating and Ocean Recreation administrator for the Department of Land and Natural Resources.

At least 200 boats at Keehi Lagoon on Oahu were damaged when their floating docks broke loose, pushing them out to sea and then pulling them back in when waves crashed toward shore.

Mike Dayton, acting secretary of the Emergency Management Agency, gave the estimate after touring the battered Santa Cruz Harbor, where 18 vessels sank, about 100 were damaged and another 12 remained unaccounted for.

The damage in Santa Cruz Harbor alone is estimated at $17 million. The harbor is housing 58 commercial fishing vessels not able to leave the harbor for at least a week until it reopens, said Lisa Ekers, director of the Santa Cruz Port District. She said she was also working to get 60 people living on boats back into their homes.

Along the state's North Coast, officials at the heavily damaged Crescent City Harbor were still working on totaling the value of the damage. All told, 53 vessels were damaged, including 15 that sank, said Alexia Retallack, a spokeswoman for the state Department of Fish and Game.

The harbor, which provided berths for more than 100 boats, was virtually destroyed by the waves, she said, devastating the fishing industry in a town where the economy is largely dependent on the day's catch.

A federal team will be in Crescent City later this week to use special sonar equipment to map sunken boats in the harbor.

In Santa Cruz, sonar was already being used to search for missing vessels, and crews worked to pull sunken boats out of the water Monday. Divers jumped into the brown, oil-sheened water and attached inflatable pillows as big as their own bodies to the hulls, then pumped air in them to get the battered boats to float to the top.

Once the sludge-covered vessels made it to the surface, they were hauled ashore into a parking lot where the waiting owner would assess the damage.