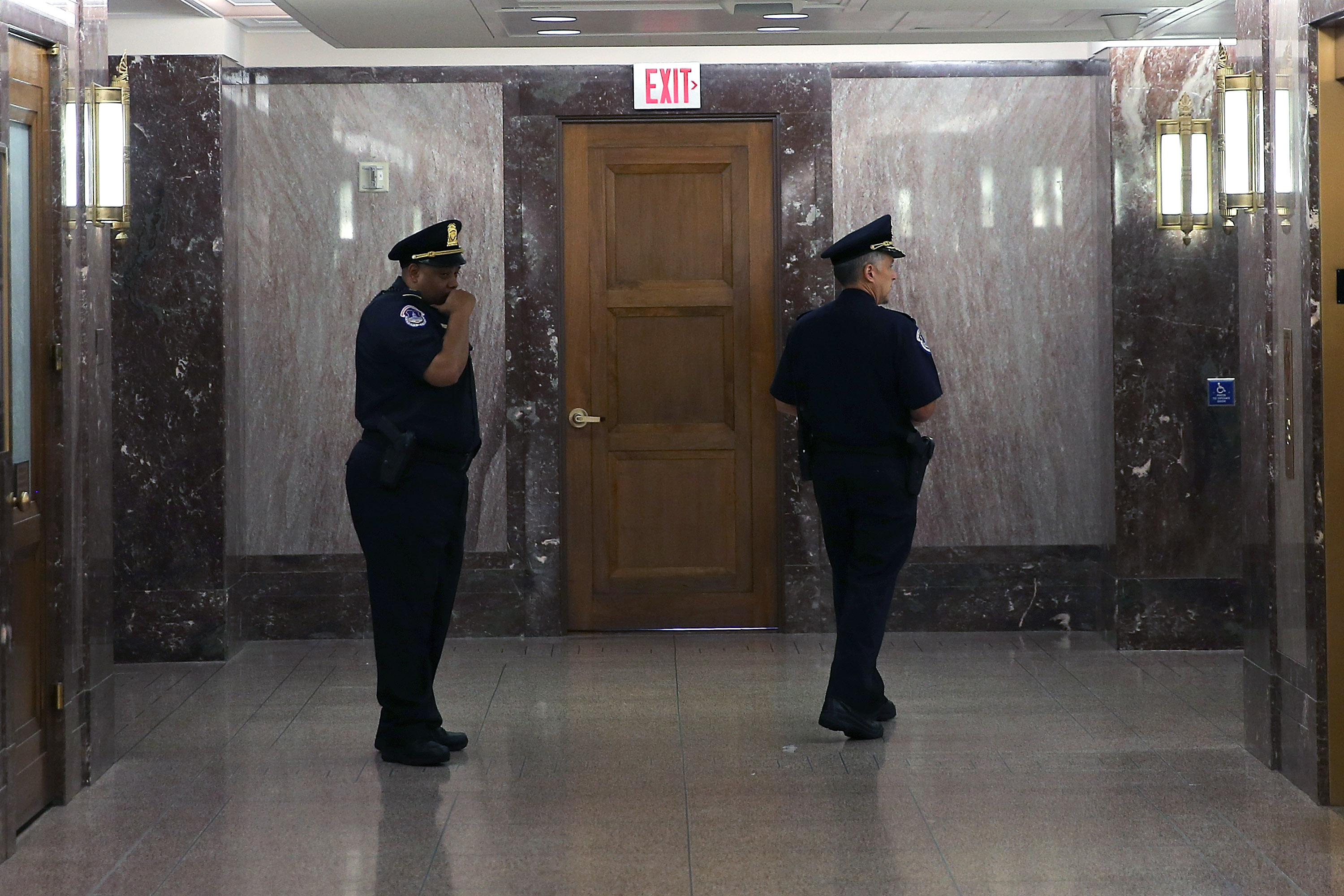 A Senate hearing about the challenges facing the Transportation Security Administration (TSA) was evacuated Tuesday after a bomb threat was phoned in.

The threat led U.S. Capitol Police (USCP) to investigate a suspicious package in room in the Dirksen Senate Office Building, prompting them to clear several floors in the building. The room was cleared and no hazardous materials were found, said USCP spokeswoman Lieutenant Kimberly Schneider.

Just a few hours later, a bomb threat was made against the White House Briefing Room, where a televised briefing by White House Press Secretary Josh Earnest was interrupted and reporters temporarily evacuated.

Under federal law, bomb threats carry a sentence of up to 10 years.

An investigation by the DHS inspector general found that dozens of airport employees got security clearance from the TSA, even though they were on a terror watch list because the TSA does not have access to terrorist watch data. That data would have flagged 73 airport workers who have secure access to areas of commercial airports.

The report follows revelations last week that undercover agents posing as passengers were able to sneak mock explosives or banned weapons through security checkpoints 95 percent of the time. The test found a potential vulnerability with airport body scanners.

"While we applaud the concept of risk-based approach in transportation security, our audits and inspections have uncovered significant vulnerabilities, and we have deep concerns regarding the manner in which TSA manages this risk," Roth said at the hearing.

Many of those vulnerabilities stem from human error among the TSA workforce, which results from the hiring and training process, he said. There are also concerns about how the agency buys, uses and maintains equipment.

Roering said there was a "complacency" among the TSA workforce because there has been insufficient realistic testing and that the detection rate of improvised explosive devices (IEDs) did not become a topic of discussion or concern until recently.

Another factor she cited in the detection rates was "poor morale" among the workforce. She pointed to a 2014 survey of federal employees that found DHS, the TSA's parent agency, had the lowest ratings in all of government.

"The job of a TSA officer is a challenging one, with a great deal of pressure and scrutiny. A culture of fear and distrust has been created in the agency also impacting the morale and performance of our employees. This is clearly documented in the results of the survey," she said.

In an effort to expedite the flow of passengers through the airport, Roering said, TSA has been handing out pre-check status "like Halloween candy. " The program allows "low risk" passengers are able to move more quickly through security lines after going through an application and interview process with the government. She said that security gaps are being created by the process.