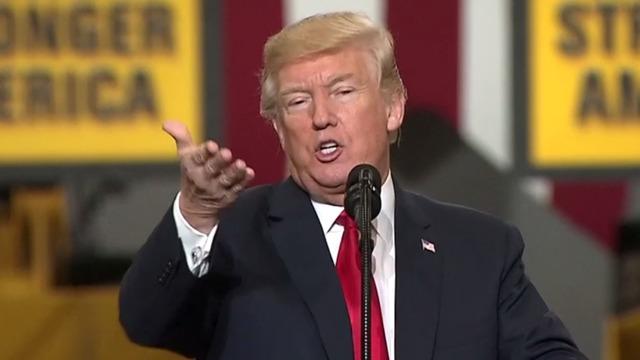 President Trump's description of "sh*thole countries," prompted 162 complaints to the FCC about news coverage of it, according to public records obtained by CBS News through a Freedom of Information Act Request.

"It's extraordinarily high," says Tom Hollihan, a professor at the University of Southern California who studies political communication.

Most of the complaints submitted online and by phone from January 11 to January 22 target CNN, which aired the full expletive spoken by reporters and analysts and on graphics. But the FCC does not regulate cable news, and CNN declined to comment publicly for this story.

However, there were also complaints against other broadcast news organizations including NPR, NBC and CBS.

"There were compelling editorial reasons for the content of NPR's news coverage," NPR spokesperson Isabel Lara told CBS News. "The word in question was an integral part of the news of that day and using it was necessary for the audience to understand what was happening. We limited the number of times it was said on the air and each time we gave a warning about profanity."

NBC News also offered a warning before quoting the president.

CBS News did not air the full expletive in broadcasts or in graphics.

The FCC declined to say if any station or broadcaster has been fined, or if it took any other action.

"Regarding enforcement actions, as a general policy, we cannot comment on whether or not something is or could be investigated," an FCC spokesman told CBS News.

One viewer in Brainerd, Minnesota, on January 11, wrote in a complaint submitted online, "CNN airs a news report claiming to quote President Donald Trump as using the unedited word 'sh*thole' which clearly and blatantly violates indecency and profanity broadcast rules. My two children (7 & 9) now are using these words and believe it's acceptable."

Another viewer in Lake Forest, California, wrote, "It's 4:30 in the afternoon and I'm sitting with my child. I turn on cnn (sic) and it spells out shithole across the screen. That's bull shit."

One viewer in Laguna Niguel, California, called use of the word on television "jewish (sic) propaganda."

However, one viewer of "NBC Nightly News" offered a solution, "To solve this problem, the President shouldn't say sh*t like this."

It's not the first time that news media have faced the challenge of covering the president in his own words.

At a September 2017 rally in Huntsville, Alabama, Mr. Trump said, "Wouldn't you love to see one of these NFL owners when somebody disrespects our flag to say 'get that son of a b*tch off the field right now, out, he's fired, he's fired.'"

Before Mr. Trump's election, following the October 2016 release of the infamous 2005 "Access Hollywood" tape in which he boasts to host Billy Bush in a conversation about women on a hot microphone that he can "grab them by the pussy," the Los Angeles Times counted more than 20 complaints from upset parents to the FCC about coverage of the moment in the days after the publication of the footage.

Former Presidents Richard Nixon and Lyndon B. Johnson were known for their use of caustic language, but media analysts say Presidents Trump's public profanities are posing unprecedented challenges for news organizations -- especially for broadcast news which usually abstains from airing profanities.

"I think the predicament of the media is whether to break conventions, and cover him in his own words," Hollihan said.

"I'm of the opinion you have to quote verbatim -- even if vulgar -- because that's what he said -- or reliably is reported to have said," according to Hall. "Readers/viewers need to know the context ... so they make up their own minds how they feel about it."

You can view the complaints here: