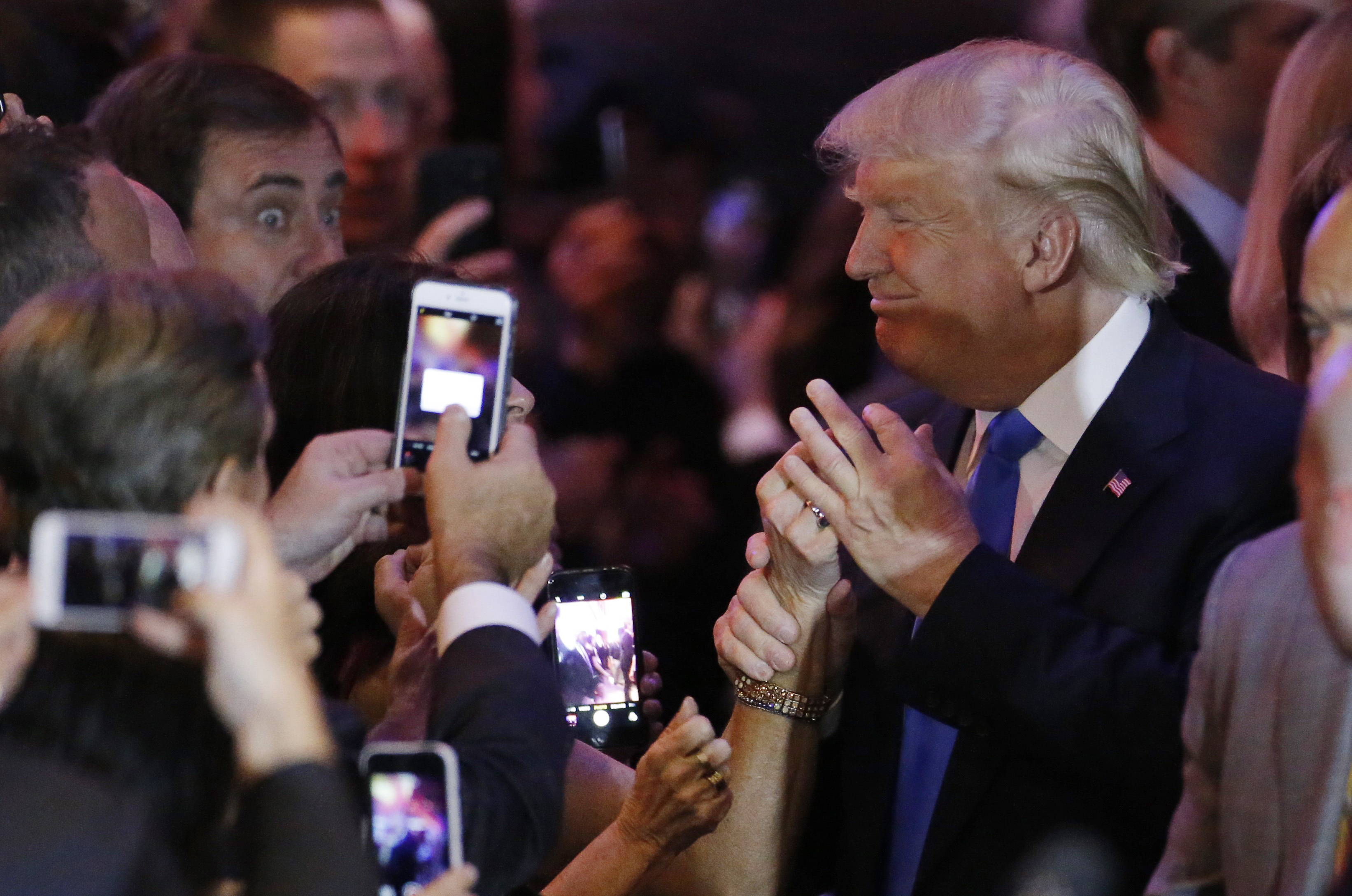 Basking in the glow of sweeping primary victories across five states in the Northeast, GOP front-runner Donald Trump, delivered his first major foreign policy speech in Washington on Wednesday.

It was filled with broad, grandiose pronouncements with little detail, but gave some insight into what foreign affairs would look like in a Trump administration.

"We're getting out of the nation building business," Trump told a room, filled with some members of Trump's foreign policy team - and even a former presidential candidate, former Virginia governor Jim Gilmore. One of the members of Trump's team, Whaled Phares. told the Associated Press beforehand that the speech would have "no details."

Trump barely mentioned his plan that sent shockwaves through the 2016 race in the fall, when he proposed banning all Muslims from entering the country. In Wednesday's speech, he called it "pause for reassessment."

He blasted President Barack Obama's foreign policy as having "no vision, no purpose, no strategy."

Whether this approach is realistic was a separate question. Trump said, "Events may require the use of military force," to halt the spread of extremism and then said he would work with allies in the Muslim world.

"But this has to be a two-way street, Trump said. "They must also be good to us and remember us and all we are doing for them."

Trump's plan to bring regional powers around the world into the fold to fight ISIS would likely require some outward messaging and public statements on details of a plan.

He also called for a reinvestment of resources into rebuilding the United States military, which he called "depleted."

How Trump would pay for increasing military spending is unclear, but Trump said in his speech, "Ending the theft of American jobs will give us the resources we need to rebuild our military and regain our financial independence and strength."

Trump later called for European and Asian allies to pay more to the United States for defense.

"We have spent trillions of dollars over time - on planes, missiles, ships, equipment - building up our military to provide a strong defense for Europe and Asia," Trump said. "The countries we are defending must pay for the cost of this defense - and, if not, the U.S. must be prepared to let these countries defend themselves."

In the past, Trump has suggested that he would be okay with countries like Saudi Arabia and Japan amassing nuclear weapons so they can defend themselves - and so the United States doesn't have to.

"Unfortunately, we have a nuclear world now," Trump told The New York Times in March. "Would I rather have North Korea have [nuclear weapons] with Japan sitting there having them also? You may very well be better off if that's the case. In other words, where Japan is defending itself against North Korea, which is a real problem."

The most specific Trump was in his speech on Wednesday at the Mayflower hotel was in mentioning that he would meet with NATO and Asian allies in two separate summits, to discuss a "rebalancing of financial commitments" and to take a "fresh look at how we can adopt new strategies for tackling our common challenges."

This was Trump's second speech with a teleprompter, the first being at the annual AIPAC conference recently. He stumbled on words occasionally - and the speech had a dramatically different feel than the ones he typically gives at rallies.

Perhaps one of the more surprising parts of Trump's speech was an olive branch that Trump said he would extend to Russia and China if he is elected.

"We desire to live peacefully and in friendship with Russia and China," Trump said. "We have serious differences with these two nations, and must regard them with open eyes. But we are not bound to be adversaries. We should seek common ground based on shared interests. Russia, for instance, has also seen the horror of Islamic terrorism."

China is often a target for Trump on the campaign trail, a country he says is committing the greatest theft in the history of the world by stealing jobs from the United States.

Trump has found himself in hot water over his foreign policy stances. At a Republican debate in December, Trump struggled with an answer about what his priority is among the nuclear triad, which refers to the trio of means to deliver a nuclear attack.

In the same interview with the New York Times, where he talked about other countries amassing nuclear weapons, Trump didn't seem to know that there were sanctions still in place against Iran, in spite of the nuclear agreement struck with the country.

This speech, however, showed Trump in a rare, sober moment in front of foreign policy dignitaries, and many campaign surrogates, including Alabama Sen. Jeff Sessions and Phares. Trump, as he has said many times on the campaign trail, insisted he wanted to avoid the mistakes of the Iraq War.

'I will not hesitate to deploy military force when there is no alternative," Trump said. "But if America fights, it must fight to win. I will never send our finest into battle unless necessary - and will only do so if we have a plan for victory."