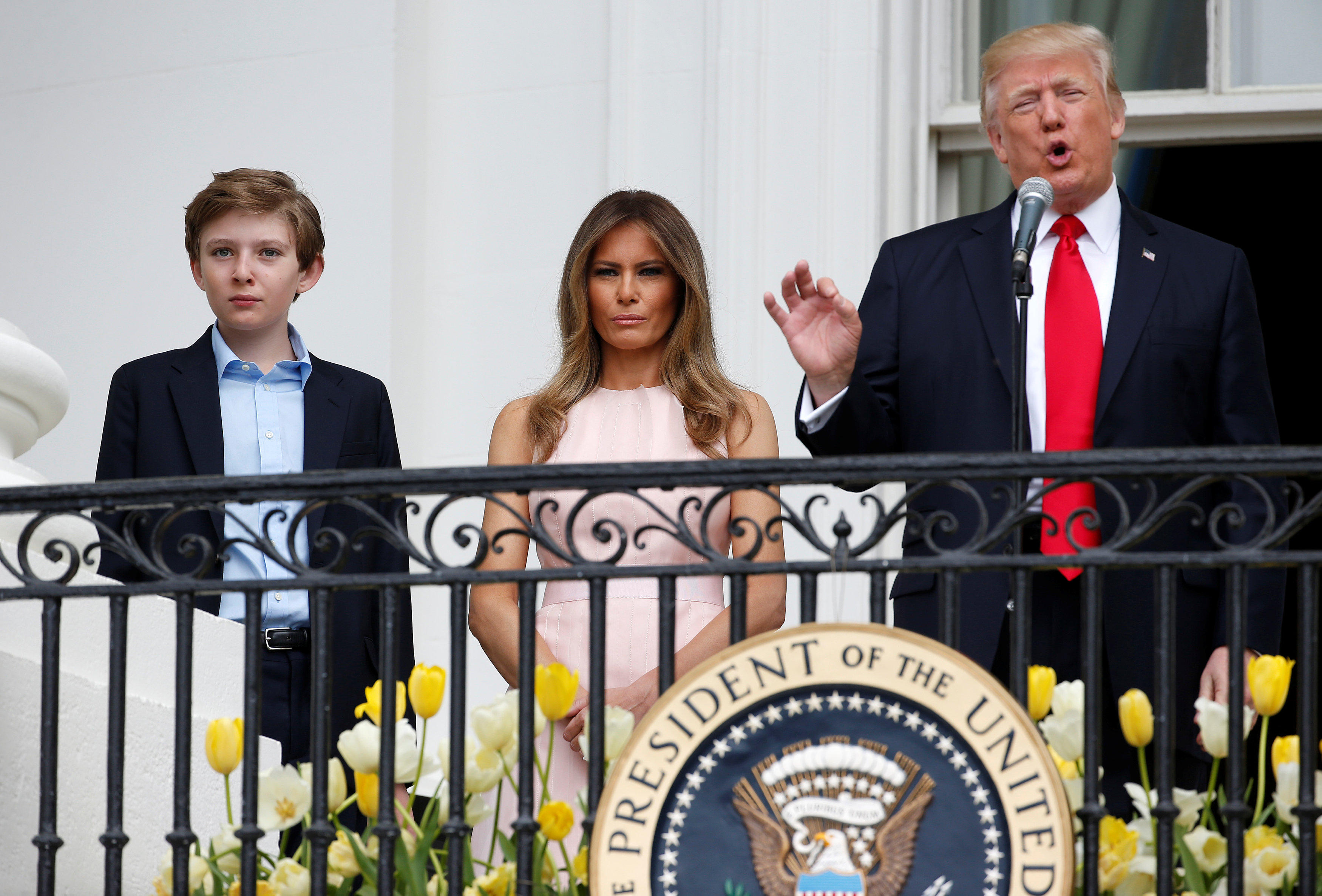 PANMUNJOM, South Korea — A day after a failed North Korean missile test, U.S. President Donald Trump had a message Monday for the North’s ruler: ‘Gotta behave.” At the same time, Vice President Mike Pence warned at the Korean Demilitarized Zone that America’s “era of strategic patience is over.”

Keeping up the verbal volleying, North Korea’s deputy U.N. ambassador accused the United States of turning the Korean peninsula into “the world’s biggest hotspot” and creating “a dangerous situation in which a thermonuclear war may break out at any moment.”

Pence’s visit to the tense DMZ dividing North and South Korea came at the start of a 10-day trip to Asia and underscored U.S. commitment. It allowed the vice president to gaze at North Korean soldiers afar and stare directly across a border marked by razor wire.

As the bomber jacket-clad vice president was briefed near the military demarcation line, two North Korean soldiers watched from a short distance away, one taking multiple photographs of the American visitor.

Pence told reporters that Trump was hopeful China would use its “extraordinary levers” to pressure the North to abandon its weapons program, a day after the North’s failed missile test launch. But Pence expressed impatience with the unwillingness of the North to move toward ridding itself of nuclear weapons and ballistic missiles.

Pointing to the quarter-century since the United States first confronted North Korea over its attempts to build nuclear weapons, he said a period of patience had followed.

“But the era of strategic patience is over,” he declared. “President Trump has made it clear that the patience of the United States and our allies in this region has run out and we want to see change. We want to see North Korea abandon its reckless path of the development of nuclear weapons, and also its continual use and testing of ballistic missiles is unacceptable.”

Trump himself appeared to reinforce the message at the White House, replying “Gotta behave” when a CNN reporter asked what message he had for North Korean leader Kin Jong Un.

In New York, the North’s deputy U.N. ambassador, Kim In Ryong, said that U.S.-South Korean military exercises being staged now are the largest-ever “aggressive war drill.” He said his country “is ready to react to any mode of war desired by the U.S.”

In Moscow, Russian Foreign Minister Sergey Lavrov, speaking to reporters Monday evening, said he hoped there would be “no unilateral actions like those we saw recently in Syria and that the U.S. will follow the line that President Trump repeatedly voiced during the election campaign.”

Meanwhile, China made a plea for a return to negotiations. Foreign Ministry spokesman Lu Kang said tensions need to be eased on the Korean Peninsula to bring the escalating dispute there to a peaceful resolution. Lu said Beijing wants to resume the multi-party negotiations that ended in stalemate in 2009 and suggested that U.S. plans to deploy a missile defense system in South Korea were damaging its relations with China.

Late Monday, Pence reiterated in a joint statement alongside South Korean Acting President Hwang Kyo-ahn that “all options are on the table” and said any use of nuclear weapons by Pyongyang would be met with “an overwhelming and effective response.” He said the American commitment to South Korea is “iron-clad and immutable.”

Noting Trump’s recent military actions in Syria and Afghanistan, Pence said, “North Korea would do well not to test his resolve” or the U.S. armed forces in the region.

The vice president earlier visited a military installation near the DMZ, Camp Bonifas, for a briefing with military leaders at the joint U.S.-South Korean installation, which is just outside the 2.5-mile wide (4 kilometers) DMZ. Under rainfall, Pence later stood a few meters from the military demarcation line outside Freedom House, gazing at the North Korean soldiers across the border, and then peered at a deforested stretch of North Korea from a lookout post in the hillside.

In Tokyo, Japanese Prime Minister Shinzo Abe, speaking to a parliamentary session Monday, said: “Needless to say, diplomatic effort is important to maintain peace. But dialogue for the sake of having dialogue is meaningless.”

“We need to apply pressure on North Korea so they seriously respond to a dialogue” with the international community, he said, urging China and Russia to play more constructive roles on the issue.

Pence’s visit came amid increasing tensions and heated rhetoric on the Korean Peninsula. While the North did not conduct a nuclear test, the specter of a potential test and an escalated U.S. response has trailed Pence as he undertakes his Asian tour.

The Trump administration is hoping that China will help rein in North Korea in exchange for other considerations. Last week, Trump said he would not declare China a currency manipulator, pulling back from a campaign promise, as he looked for help from Beijing, which is the North’s dominant trade partner.