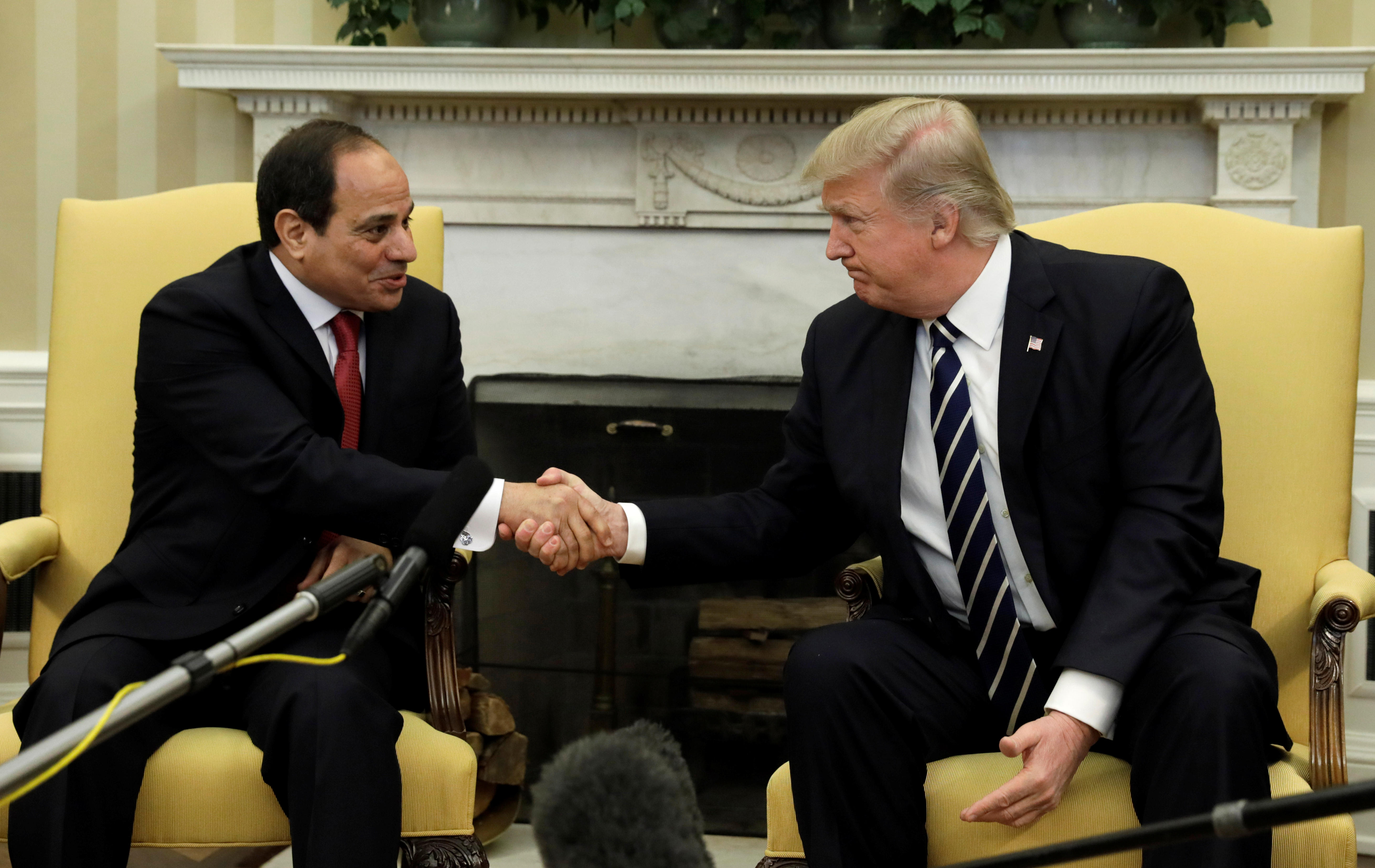 We are building up our military to a level that will be “probably the highest that we’ve ever had -- plane orders, ship orders, aircraft carrier orders. We are rejuvenating our military to the highest level,” Mr. Trump told el-Sissi. Military aid is a topic that el-Sissi might broach with the president.

“You have a great friend and ally in the United States and in me,” the president told el-Sissi during their Oval Office meeting.

El-Sissi informed the president that this was his first visit to the U.S. as Egypt’s president, and he pointed out that it had been eight years since an Egyptian president visited the U.S. He told Mr. Trump that he had “deep appreciation” of “your unique personality” and promised that Egypt would stand by the U.S. in developing an effective counterterrorism strategy. He promised to support Mr. Trump “very strongly and very earnestly.”

Reporters shouted questions about the subway explosion in Russia earlier Monday, but Mr. Trump did not respond.

President Trump has repeatedly mentioned Egypt as one of the Muslim-majority allies that the U.S. should maintain its partnership with in the fight against extremists like the Islamic State group. The White House welcome comes after a tense relationship between Egypt’s leader and the previous administration.

CBS News’ Margaret Brennan noted that the White House told reporters Friday the administration would not make human rights an issue of public dispute. They will also not publicly discuss the Americans imprisoned in Egypt, including Aya Hijazi who has been jailed in Egypt for three years. Notably the State Department had a lengthy criticism of Egypt – including arbitrary arrests of journalists, activists and civil society -- in its 2016 human rights report, which was quietly released:

The most significant human rights problems were excessive use of force by security forces, deficiencies in due process, and the suppression of civil liberties. Excessive use of force included unlawful killings and torture. Due process problems included the excessive use of preventative custody and pretrial detention, the use of military courts to try civilians, trials involving hundreds of defendants in which authorities did not present evidence on an individual basis, and arrests conducted without warrants or judicial orders….The government inconsistently punished or prosecuted officials who committed abuses, whether in the security services or elsewhere in government. In most cases the government did not comprehensively investigate human rights abuses, including most incidents of violence by security forces, contributing to an environment of impunity.