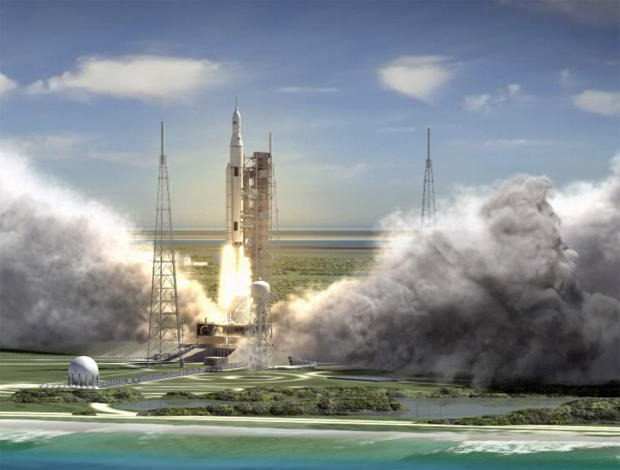 The Trump administration is proposing $19.1 billion for NASA in its fiscal 2018 budget blueprint, a 0.8 percent decrease from 2017 funding levels, focusing on deep space exploration, both human and robotic, and increased public-private partnerships to lower costs and encourage private sector innovation.

“The National Aeronautics and Space Administration is responsible for increasing understanding of the universe and our place in it, advancing America’s world-leading aerospace technology, inspiring the nation, and opening the space frontier,” the Office of Management and Budget said in the proposal.

The 2018 budget blueprint for NASA “increases cooperation with industry through the use of public-private partnerships, focuses the nation’s efforts on deep space exploration rather than Earth-centric research, and develops technologies that would help achieve U.S. space goals and benefit the economy.”

Robert Lightfoot, NASA’s acting administrator, said in a statement to agency employees that the FY2018 proposal is “a positive budget overall for NASA.”

“I know parts of the budget will create concerns for some,” he said. “As with any budget, we have greater aspirations than we have means, but this blueprint provides us with considerable resources to carry out our mission, and I know we will make this nation proud.”

“What’s most noteworthy to me is that NASA received only a minuscule budget reduction when the budgets of many other government agencies were cut by double digits,” he said. “This validates what many have anticipated -- that NASA and its human and robotic exploratory missions will fare well in a Trump administration.”

Marcia Smith, editor of SpacePolicyOnline.com, came to a similar conclusion, writing the blueprint “is good news considering the draconian cuts proposed for many other agencies.”

“President Obama’s Asteroid Redirect Mission would be cancelled and NASA’s Office of Education would be eliminated under the proposal, but other NASA programs survived relatively unscathed,” she wrote. “The Earth science program is cut, but not as deeply as many feared.”

The proposal includes $3.7 billion to continue development of NASA’s Orion crew capsule and the huge Space Launch System heavy-lift booster needed for deep space missions to the moon or beyond. But to “accommodate increasing development costs,” the Asteroid Redirect Mission, or ARM, will be cancelled.

Instead, “NASA will investigate approaches for reducing the costs of exploration missions to enable a more expansive exploration program,” the OMB said.

NASA’s long-range goal for human exploration beyond low-Earth orbit has been Mars, following the Obama administration’s goal of sending astronauts to the red planet in the mid 2030s using Orion, a yet-to-be-developed habitation module and the SLS booster.

More powerful than the legendary Saturn 5 booster that propelled Apollo astronauts to the moon, the SLS is scheduled for its first test flight in late 2018. The first piloted mission is targeted for the 2021 timeframe, although NASA is looking into the possibility of putting astronauts aboard the initial flight.

Following those initial SLS-Orion shakedown missions, NASA had been working on plans to robotically retrieve a large boulder from a nearby asteroid in the early 2020s. The asteroid fragment would be hauled back to the vicinity of the moon for hands-on study and sample collection by astronauts aboard an SLS-launched Orion spacecraft in the mid 2020s.

The ARM missions were seen as a precursor to piloted missions to Mars in the 2030s. But the project never won wide support in the science community or among Republicans and President Trump’s budget blueprint would end the debate once and for all.

The 2018 budget proposal includes $1.9 billion for robotic space exploration, including continued support for a probe that will repeatedly fly by Jupiter’s moon Europa, which may harbor a sub-surface ocean habitat, and a mission in 2020 to send another nuclear-powered rover to Mars. Work to develop a multi-billion-dollar mission to land on Europa would be terminated.

And the proposal would eliminate NASA’s Office of Education, saving another $110 million.

The result will be “a more focused education effort through NASA’s Science Mission Directorate,” the OMB said. “The Office of Education has experienced significant challenges in implementing a NASA-wide education strategy and is performing functions that are duplicative of other parts of the agency.”

Logsdon said it was not surprising that ARM was cancelled because “the mission has never been a favorite of Republicans in Congress.”

“Also not surprising, but unfortunate, are the cancelled Earth science missions,” he said. “Basically, NASA has been given a “go” to continue on its current path, with changes at the margins. Most of those changes will meet with Congressional resistance, so the final outcome with respect to Earth science and the NASA Office of Education is still TBD. I doubt if ARM will survive.”