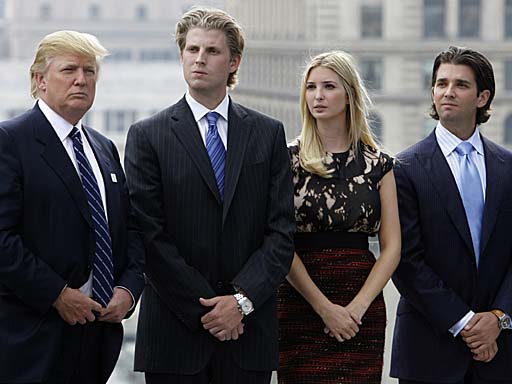 After reports that Donald Trump’s adult sons were listed as directors for a nonprofit offering inauguration weekend access to the president-elect, the Trump campaign pushed back on claims of their involvement in the organization.

The Center for Public Integrity reviewed filing documents for the Opening Day Foundation, a Texas nonprofit formed on Dec. 14 that says it’s dedicated to preserving “the great outdoors.” In a draft invitiation to the event, billed as “Opening Day 2017,” donors giving at least $500,000 to the nonprofit were promised a “private reception and photo opportunity” with Mr. Trump as well as a “multi-day hunting and/or fishing excursion” with Donald Trump Jr. and Eric Trump.

“Opening Day is your opportunity to play a significant role as our family commemorates the inauguration of our father, friend and President Donald J. Trump. Join us as we celebrate the great American tradition of outdoor sporting, shooting, fishing and conservation,” reads a draft of the invitation, first obtained by TMZ. The draft invitation also listed Mr. Trump’s two adult sons as “honorary co-chairmen” of the event.

“The Opening Day event and details that have been reported are merely initial concepts that have not been approved or pursued by the Trump family,” said Hicks in a statement. “Donald Trump Jr. and Eric Trump are avid outdoorsmen and supporters of conservation efforts, which align with the goals of this event, however they are not involved in any capacity.”

In a call with reporters Wednesday, the transition team repeated that the Trump sons would have no involvement with the event itself.

According to the New York Times, the event is still scheduled, but “references to the hunting trip have been removed.”

The “Camouflage & Cufflinks”-themed evening will still be held at a convention center in Washington, D.C. on January 21, the day following Mr. Trump’s inauguration to the White House.

Two of the four directors of the Opening Day Foundation, Dallas hedge fund manager Gentry Beach and Tom Hicks Jr., the son of a Texas billionaire, were fundraisers for the Trump campaign and are close to Donald Trump Jr, according to local news reports. But soon after the Center for Public Integrity found that the Opening Day Foundation’s nonprofit registration papers also listed Donald Trump Jr. and Eric Trump as directors of the organization, a spokeswoman for the president-elect released a statement disavowing the participation of the Trumps.

A spokeswoman for the Texas secretary of state told the Washington Post Wednesday that new paperwork had been filed to remove the Trump sons from the Opening Day Foundation leadership.