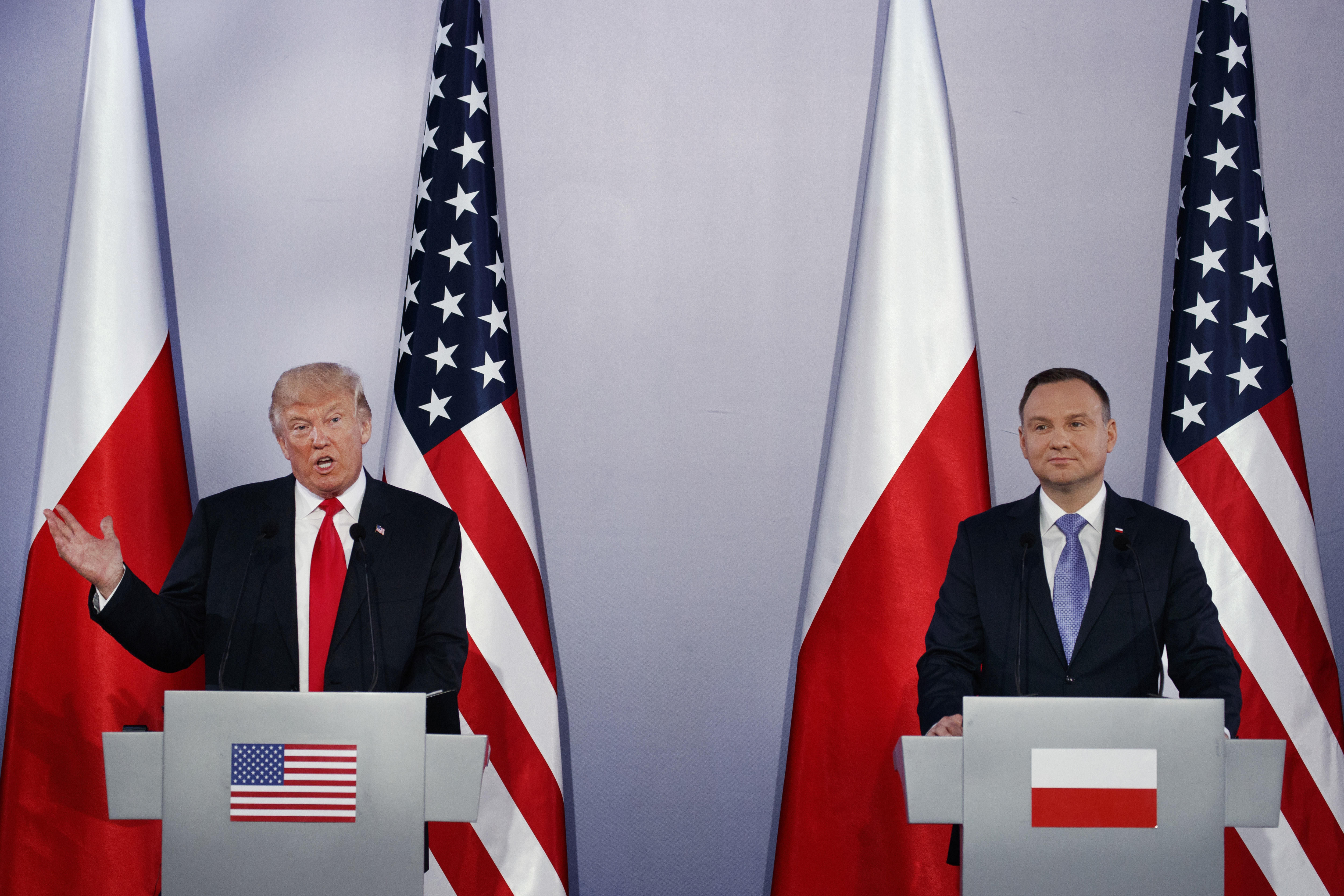 Mr. Trump arrived in Warsaw on Wednesday for a brief visit -- his return to Europe after a shaky first trip to the continent in May, when he sought to reassure NATO allies that he supports Article 5, the principle of collective defense of the alliance.

The joint appearance with Duda was President Trump's first overseas news conference, and he was quickly asked about the successful intercontinental ballistic missile test carried out by North Korea on July 4.

4:33 a.m. ET: President Duda began the news conference by welcoming President Trump. He stressed the partnership between the two nations, and in particular the shared role as members of the NATO alliance. He said he and Mr. Trump had discussed, among many other security issues, the looming "Zapad 17" military exercises to be carried out by Russia in the autumn in neighboring Belarus. Many expect Russian leader Vladimir Putin to increase the scale of the semi-regular exercise in a show of force with tensions still high in the region following Russia's annexation of the Crimean Peninsula from Ukraine.

He said he was assured that the United States and President Trump took Poland's security seriously as a member of NATO.

4:39 a.m. ET: President Trump noted that his visit was "quick, but the people have been wonderful." He said he and Duda had reassured the "enduring bonds of friendship" between the two nations, going on to say Poland had been "right their with us" in the fight against Islamic extremist groups in Iraq and Afghanistan.

Mr. Trump said that the U.S. and Polish "commitment to NATO" was "critical," before mentioning the challenges posed by Russia.

4:43 a.m. ET: He said Poland had joined the U.N. Security Council at a "critical time," citing the "threat from North Korea -- and that's what it is, it's a threat," which he vowed the U.S. would confront with it's allies to "very strongly demonstrate to North Korea that there are consequences for their very bad behavior."

4:51 a.m. ET: The first question was on North Korea's ICBM test, with a second part asking for Mr. Trump's reaction to his viral video battle with CNN.

Mr. Trump responded to the second question first, saying the network, "has some problems" and describing it again as "fake news."

He said CNN had "really taken it too seriously, and I think they've really hurt themselves really badly... we want to see fair press. I think it's a very important thing. We don't want fake news."

The president then turned to North Korea's ICBM test, saying there were "pretty severe things that we're thinking about" in response, but adding that he does not "draw red lines," and "we'll have to see" how the Kim Jong Un regime behaves in the coming weeks and months.

"It's a shame that they're behaving this way... in a very, very dangerous manner," Mr. Trump said, adding that "something will have to be done about it.

4:57 a.m. ET: President Trump was asked to say definitively whether he believed Russia had hacked the U.S. election that won him the presidency.

He said, "I think it was Russia, and it could well have been other countries, and I won't be specific."

Mr. Trump then sought to stress that, "when President Obama found out about this (Russian hacking) in August, and the election was in November, that's a long time, and he did nothing about it."

He said he believed that Mr. Obama neglected to do anything about the hacking because, "he thought Hillary Clinton was going to win the election."

He summed up his stance by saying, "nobody really knows" who hacked the 2016 U.S. election.

After the news conference, Mr. Trump attended a summit of the Three Seas Initiative, which aims to improve trade between countries around the Baltic, Black and Adriatic Seas.

Later Wednesday, Mr. Trump gave a speech in Warsaw in which he lauded the Polish people, "who have never forgotten who they are," according to excerpts released by the White House.

In the speech, President Trump renewed his call for nations to unite in the fight against terrorism, "to strip them of their territory, their funding, their networks, and any form of ideological support. While we will always welcome new citizens who share our values and love our people, our borders will always be closed to terrorism and extremism."

Following his stop in Poland, Mr. Trump travels to Hamburg, Germany for the G-20 Summit which kicks off Friday. There, he'll have his first face-to-face meeting with Russian President Vladimir Putin, and he'll also meet with Chinese President Xi Jinping.