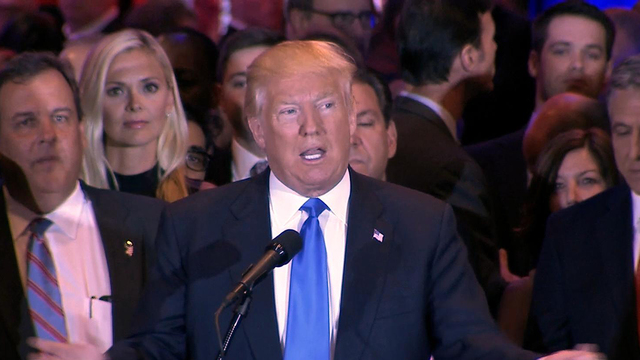 Calling himself the "presumptive nominee," Republican presidential front-runner Donald Trump swept five states in the northeast corridor on Tuesday night, putting added pressure on his two GOP rivals as the time to beat him dwindles.

"I consider myself the presumptive nominee, absolutely,'' Mr. Trump told CBS News Correspondent Major Garrett during a press conference at an election night victory party in New York City. "We should heal the Republican party; we should bring the Republican party together."

With family and high profile surrogates such as Chris Christie and Willie Robertson behind him, Trump told the press that the "strange" alliance between John Kasich and Ted Cruz shows "weakness and ineffectiveness." He called them "all talk, no action" politicians.

Trump eventually pivoted to his likely foe in the general election, Hillary Clinton, singling her out for harsh criticism.

"I think the only card she has is the woman's card," Trump said. "She has nothing else going. Frankly, if Hillary Clinton were a man, I don't think she would get five percent of the vote. The only thing she has got going is the woman's card. The beautiful thing is, women don't like her. Look how well I did with women tonight."

The remarks prompted a quick reaction from Clinton, who tweeted, "Caught your speech. ... About that 'woman's card"'..."

The tweet contained video from Clinton's victory speech Tuesday night -- video that was quickly used in a Clinton ad. In it, Clinton says to loud cheers, "If fighting for women's health care and paid family leave and equal pay is 'playing the woman card,' then deal me in!"

Prior to his victory speech, Trump attended at Time Magazine's "Time 100" Gala, a fitting appearance considering his seemingly symbiotic relationship with the establishment press.

On Thursday, Trump travels to Indianapolis where he will appear with the famously explosive college basketball coaching legend, Bobby Knight, the former Indiana University coach.

Indiana's May 3 primary, and its more traditionally conservative electorate, may present a tougher landscape for Trump. Anti-Trump forces are running TV ads against him there, and Cruz is focusing most of his energy on the state.