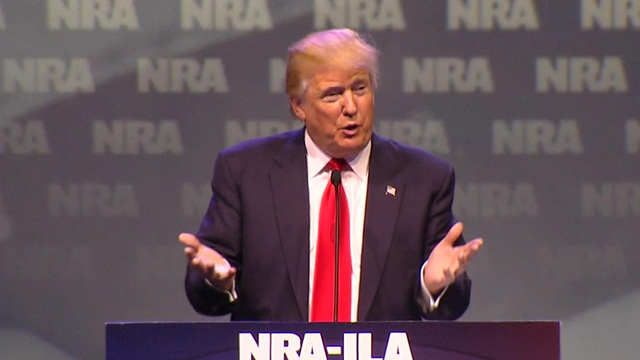 President Donald Trump touted his progress on gun rights at an National Rifle Association conference in Atlanta Friday, but not before reliving his Election Night victory and warning the crowd that "Pocahontas" — referring to Massachusetts Democratic Sen. Elizabeth Warren — may threaten gun rights in 2020.

Mr. Trump spent several minutes recounting Election Night results, state by state, then intimated the crowd already has a pro-gun candidate in 2020 — him. But he also took the opportunity to warn attendees that "Pocahontas" might run, adding that she isn't pro-gun. Mr. Trump referred to Warren as "Pocahontas" multiple times during his campaign.

"It may be Pocahontas," Mr. Trump said of his potential 2020 challenger.

Mr. Trump eventually launched into his record of protecting gun access so far in his presidency, including successfully landing the "very special" and pro-Second Amendment Neil Gorsuch on the U.S. Supreme Court. Mr. Trump emphasized his support of "responsible" gun ownership.

"You have a true friend and champion in the White House," said Mr. Trump. "No longer will federal agencies be coming after law-abiding gun owners. No longer will the government be trying to undermine your rights and your freedoms as Americans."

During his campaign, Mr. Trump promised to protect gun rights as president.

"The Second Amendment is on the ballot in November," Mr. Trump said shortly after the NRA gave its backing to the GOP nominee. "The only way to save our Second Amendment is to vote for a person that you all know named Donald Trump. Okay? I will tell you. I will never let you down."

He did sign a bill one month into office revoking an Obama-era regulation that made it tougher for people with mental illnesses to purchase firearms.

Mr. Trump also reiterated his promise to build a wall along the U.S. Mexico border, saying it would help keep out criminals. He especially singled out the MS-13 gang.