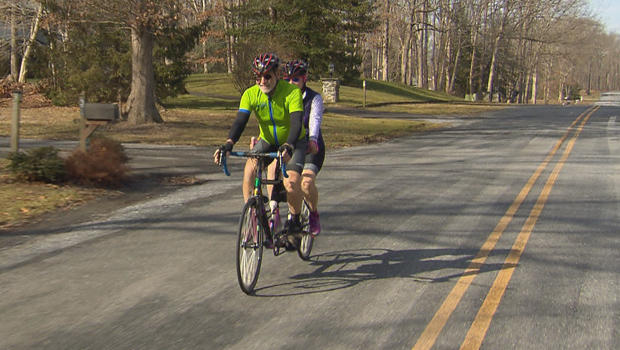 Is there a secret to making a marriage go the distance? For Mel and Barbara Kornbluh, of Pittsgrove, New Jersey, there is: riding a tandem bike.

"We've been riding a tandem bike together for 45 years," said Mel.

He said they tried riding on separate bikes at first, but then decided on a switch: "Over time we realized we needed an equalizer, and that's how we ended up with a tandem."

According to Barbara, "It was a great way to spend time together, to be fit, and to just have a great time."

Much as it works for them, Mel and Barbara realize sharing a tandem is no universal prescription for wedded bliss: "It doesn't work for everybody," he said. "You have to be willing to share and want to help your partner."

And Barbara advised: "Patience, lots of patience it takes, to learn to ride together on a tandem."

Together they've biked through most of the 50 states, and many a foreign land as well. And to hear them tell it, they're not about to stop:

"We never thought we'd get this far – it just happened, really," Mel added.

Their secret is obvious to Barbara:  "I love biking. I love Mel. So, loving Mel and biking is like one."