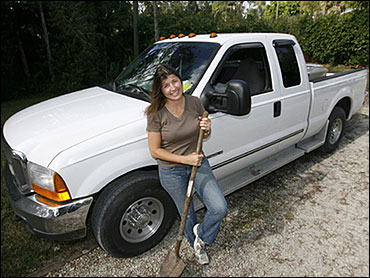 Trucks outsold cars by the highest margin in nearly five years in October, a small sign that the economy may be starting to improve.

These trucks aren't the tractor-trailers that haul freight. They were vehicles such as pickups, SUVs, minivans and smaller SUVs, which made up 54 percent of all U.S. vehicle sales according to industry tracker J.D. Power and Associates, while cars made up 46 percent of the market. That's the biggest margin of difference between the two categories since December 2005, when trucks accounted for 56 percent of sales.

Strong truck sales make economists giddy because it means people are willing to spend money again. Small business owners feel comfortable enough to buy a new pickup truck or delivery van for their company; and regular folks are confident enough in their jobs and finances to take on beefy SUV payments.

Here are the trends behind the stronger truck sales:

People are spending more. Personal savings rates are coming down. The most recent figures show the rate has decreased from a yearly high of 6.4 percent in June to 5.3 percent in September - meaning people don't feel the need to hoard cash at the bank.

Gasoline is still affordable. Truck sales have been sensitive to high gas prices in the past, falling dramatically when gas topped $3 and $4 a gallon in 2008 and many drivers were spending over $100 to fill their tanks. After nearly eight straight years of dominating the vehicle sales market, truck sales quickly declined after that gas price spike, which was driven by fears that demand from China would constrain U.S. supplies. Now, gas prices are around $2.80 a gallon, according to AAA, higher than the $1.50 to $1.90 range through the peak of truck and SUV popularity, but not enough to hinder sales.

Truck sales are "encouraging, because we know that gasoline prices have not been particularly low recently," says Dana Johnson, chief economist for Comerica Bank.

Promotions are helping. Ford, which just wrapped up a month of zero-percent financing offers on its F-series pickup trucks, saw sales jump 24.2 percent in October. George Pipas, manager of sales analysis for Ford, says sales of the F-series have been rebounding this year, as small business owners return to the market.

"Last year, businesses were very cash strapped, and many small businesses were having to conserve cash and defer any non-essential purchases, and vehicles fall into that category," he says. While some buyers may need to buy a truck, they don't necessarily have to buy a new one. And given the increasing durability of cars and trucks, drivers can hang onto their vehicles for longer.

This year, sales to commercial customers are rebounding, Pipas says, which is proof that small businesses are buying trucks and cars again. Ford vehicles, including F-series trucks, Econoline vans, and the Ford Escape and Ford Taurus sedan, make up about 80 percent of the increase in commercial sales
The economy is still weighing on Felicia Smith, 44, of Silver Spring, Md. The office worker says she sometimes worries about unemployment and the economy, but she thinks it's time to buy a new car. She's looking to get something bigger than the 2005 Mazda Tribute small SUV she currently owns.

"I'm a little nervous" about the economy, she says. "But I need something bigger.... It's about finding something that's going to make me happy."