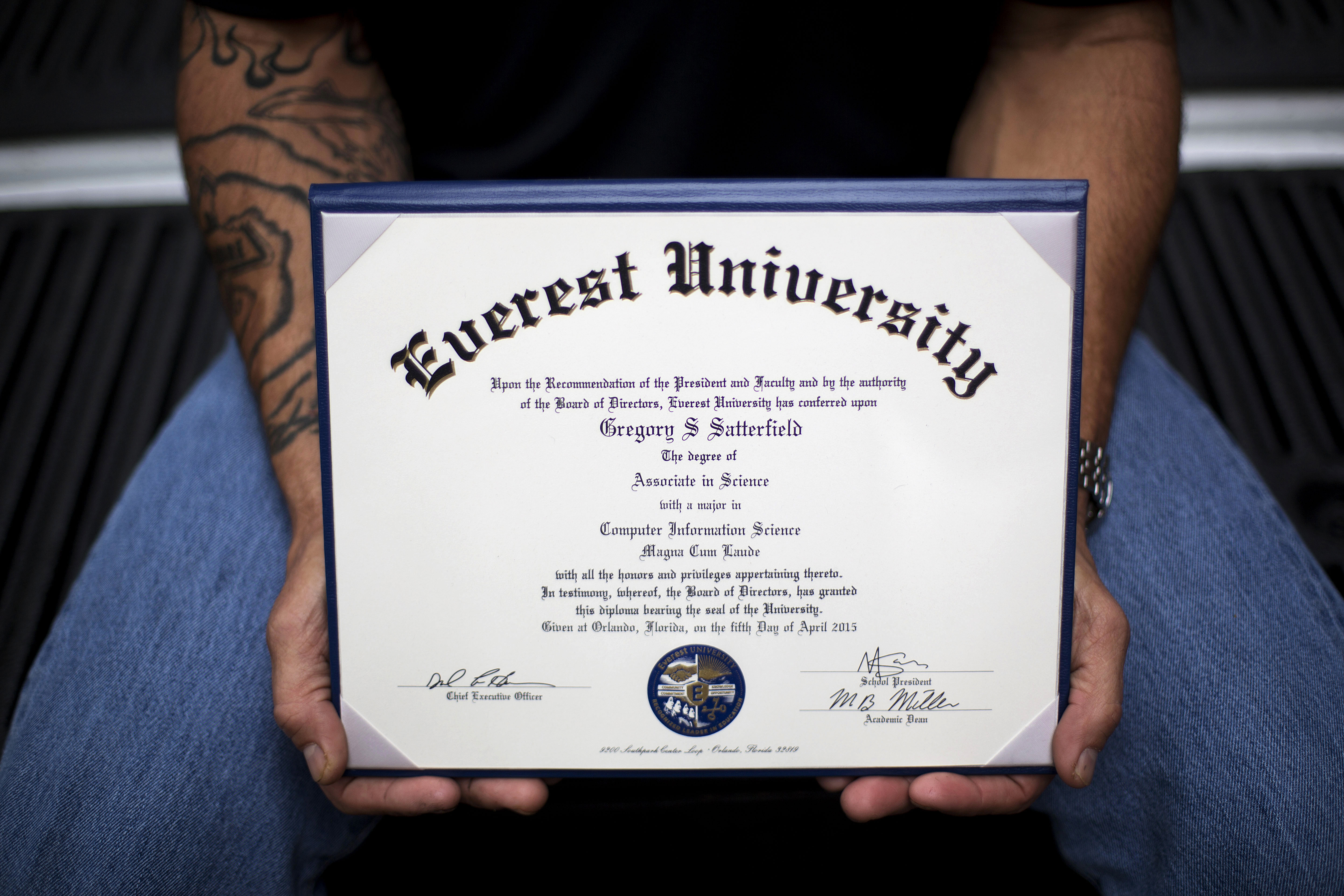 WASHINGTON - Significant problems remain at a formerly for-profit college that the Obama administration rescued from near collapse, an Associated Press review has found, despite new federal oversight and pledges of a turnaround by the schools' current nonprofit owner.

Everest University was once the flagship brand of Corinthian Colleges Inc., a for-profit school chain. Allegations of fraud and mismanagement nearly felled the school before the Education Department helped transfer Everest and a sister institution to Zenith Education Group, a nonprofit affiliate of a student-loan debt collection firm.

Zenith pledged to transform Everest, ending the school's habit of admitting "anyone with a pulse" and churning out unprepared graduates deeply in debt.

But a year after Zenith formally took control of Corinthian's flagship Everest brand and its smaller sibling, WyoTech, revolutionary change is hard to find.

Everest has shrunk to about 15,000 students from 70,000 at the time of Corinthian's failure, lowered tuition by 20 percent and shuttered some of its worst performing programs. More changes are planned, although an AP review found Everest is still operating largely according to Corinthian's for-profit business model.

Zenith still recruits students through large-scale telemarketing. Major changes to its curriculum have not yet occurred. It has retained senior Corinthian executives in key posts. It continues to recruit students using some of the very same ads that Corinthian ran during the same daytime TV talk shows.

Recent graduates told the AP they are struggling to find work that would allow them to pay back their student loans, raising the prospect that the government is seeding a new crop of loan defaults. The average post-graduation employment rate among Everest's online programs -- for which data is most readily available -- was less than 46 percent in the academic year ended last June.

"I graduated in April at the top of my class, with honors," said Shane Satterfield, a roofer in Georgia who now owes more than $30,000 in debt for the associate's degree in computer science he completed last year. "And I can't get a job paying over $8.50 an hour."

Zenith chairman David Hawn said many graduates are not yet coming out of the school with important career credentials. He said the schools were on the right track and would revamp their curriculum to focus on marketable skills.

"To suggest that any program that we have today isn't creating value is grossly overstated," he said. Zenith is investing more per-pupil in academic instruction, he said, losing $100 million in its first year.

"If Zenith is not doing right by its students, we won't hesitate to act," he said.

Despite Zenith's acknowledgement of Corinthian's past misconduct, many senior Corinthian academic, financial aid and legal officials have stayed on. After the AP asked Zenith why it had retained Diana Scherer -- a deputy general counsel who had highlighted her regulatory and compliance work for Corinthian on LinkedIn -- her profile was edited to remove references to such work.

The AP's review found that Everest continues to advertise programs it had eliminated due to poor student outcomes. Recruiters then seek to direct interested prospective students to other programs. Hawn said the errors were inadvertent.

Hawn has said Zenith would differentiate itself from its past as a for-profit company, but it maintains some practices at odds with virtually all nonprofit schools. Instead of having an independent and unpaid board of directors, Zenith shares its board with its parent company, Education Credit Management Corp., and pays its board members as much as $142,000 a year for a job that requires fewer than 20 hours each week.

Hawn said Zenith's current board structure is working well, and he does not believe class action suits are in students' best interest.

The Education Department's Mitchell disagreed. The government wants Zenith to remove the ban on group litigation, he said.

As for Zenith's continued lack of an independent board, he said: "I'm personally disappointed that they haven't moved more quickly on this."

Hawn responded Monday to this AP report, writing in part, "Unfortunately, a recent Associated Press story by Jeff Horwitz portrayed what we see as an unbalanced review of our journey to transform heavily distressed schools. Most surprising is his assertion that 'the business model...hasn't fundamentally changed.' In fact, it has changed - fundamentally. In contrast to the prior owner, Zenith is a nonprofit company focused on a mission to help students succeed - not on shareholder return."

Teachers invent a gadget to keep school shooters out

Nike shoes burned, defaced over Colin Kaepernick's "Just Do It" ad
Thanks for reading CBS NEWS.
Create your free account or log in
for more features.
View CBS News In
CBS News App Open
Chrome Safari Continue
Be the first to know
Get browser notifications for breaking news, live events, and exclusive reporting.