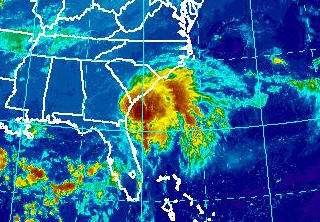 MIAMI -- Slow-moving Tropical Storm Julia dumped rain across northeast Florida and along much of the Georgia coastline Wednesday morning, but in most places it was business as usual.

Schools and government offices remained open as the storm, which formed late Tuesday afternoon off Florida’s Atlantic coast, skirted across Jacksonville and moved north, bringing rain and tropical winds to much of southern Georgia.

The National Weather Service told CBS Miami that Julia was the first tropical storm to form over land in Florida since records have been kept.

At 2 p.m. EDT Julia was centered about 25 miles southeast of Savannah, Georgia, and moving northeast at near 6 mph. Its maximum sustained winds were near 40 mph. The storm was expected to weaken to a tropical depression later in the day.

Some minor street flooding was reported early Wednesday in Brunswick, Georgia, and on nearby Sea Island. Winds from Julia also downed some limbs and caused power outages on St. Simons Island, said Jay Wiggins, emergency management director for Glynn County. But the worst wind and rainfall had subsided by daybreak Wednesday as the storm passed to the northwest.

“We were very lucky once again,” Wiggins said. “Really it was not much of an issue for us.”

Students were told to report to school in Glynn County, but officials warned parents that some bus delays were possible because of the rain.

Up the coast, Principal Patrick Rossiter of Tybee Island Maritime Academy said he was keeping close tabs on the latest storm reports and radar Wednesday.

Rossiter said he walked to the school near Savannah in stiff, swirling winds and a steady drizzle.

“If things worsen, we hunker down right here,” he told The Associated Press by phone. But as students arrived for classes he said, “so far, everything is a go.”

Georgia Power officials said fewer than 100 homes and businesses were without electricity Wednesday morning along a 60-mile stretch of the Georgia coastline between Brunswick and Savannah.

Overnight, Julia brought wind and rain to the Jacksonville area in northeast Florida, but there were few reports of damage.

The National Hurricane Center said an isolated tornado was possible across coastal Georgia and southern South Carolina on Wednesday. A tropical storm warning was in effect Wednesday morning from Fernandina Beach to the Altamaha Sound in Georgia but was later canceled.

Elsewhere, Tropical Storm Ian was moving north in the central Atlantic but still was no threat to land. In the Pacific, Hurricane Orlene continued to weaken.